Brian Taylor on Mom and Dad, Nic Cage and Crank 3

Brian Taylor, the co-creator of the Crank films, goes solo with horror comedy Mom and Dad. We speak to him about finding humanity in the horror genre, stars Nicolas Cage and Selma Blair, and a potential third Crank movie

“My relationship with my parents was great. I never felt like they wanted to kill me. They disguised that very well.”

Although the above may sound like we’re acting as a therapist to American filmmaker Brian Taylor, who's speaking to us by phone from Los Angeles, the question of his relationship with his parents is a fitting one. It's central to the premise of his new horror comedy Mom and Dad starring Nicolas Cage and Selma Blair, which is concerned with a mysterious mass hysteria that breaks out across the USA, causing parents to turn homicidal towards their children. Not all children, but specifically their own kids.

Mom and Dad is Taylor’s first feature credit as a solo director. He’s best known for his co-directing partnership with Mark Neveldine on a number of maximalist action movies, including the Gerard Butler-led Gamer, the impressively batshit superhero sequel Ghost Rider: Spirit of Vengeance, and, most notably, the two Crank films starring Jason Statham and seemingly every mad concept the pair could come up with.

Mom and Dad features a suitably unhinged performance from one Nicolas Kim Coppola, and having worked with Cage before on the Ghost Rider sequel, we wonder if there was anything from that particular performance that Taylor wanted to tap into again.

“I just wanted to tap into Cage again,” says Taylor, “because there’s just nothing quite like that guy. He’s just a one of a kind. They don’t make them like him anymore and they didn’t make them like him before him. He was definitely the first guy I sent this to, and the hope was that he would get it on a human level. The movie is a monster movie, sort of, but I think that any good genre movie is really more about the subtext. The great thing about horror is it allows us to take metaphorical monsters that are lurking in our minds and turn them into little monsters so we can see it and run away from it. Or hit it with something hard. 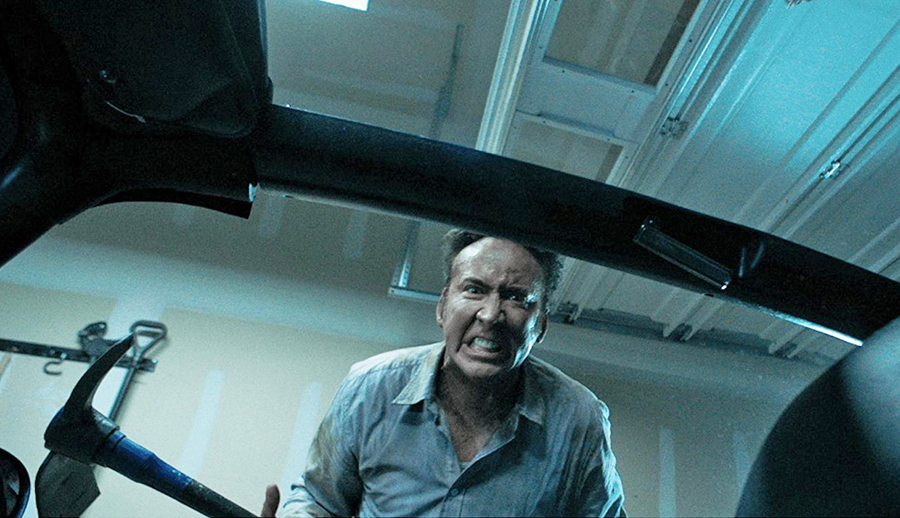 “And it’s no different with this one,” Taylor continues. “If this movie succeeds for people, that’s the level at which it will succeed because it’s touching on something that’s human and true. And I was really happy that [Cage] responded to that really strongly and instantly. And he brought a lot of himself to it and he brought something personal to it that he didn’t have to. He could have come in and just been an actor and read the lines and did the part, and it would have been just fine. But that’s just not Nic. He’s a very intense, passionate dude, and if he wants to make a movie personal, there’s nobody else who does it quite like him.

“Obviously, the second half of the movie, when everything goes nuts, has a lot of the kind of gold that we love and yearn for from a Nic Cage performance, I would say. But I really love the way he plays the first half of the movie. There’s a sort of subtle madness in just being a parent every day, even without any crazy virus that causes everybody to become homicidal. Even without that, it’s just this normal everyday life as a parent with these constant little moments of subtle madness. And I love the way he was able to convey that in a really contained way, but you can just feel it.”

'Nic Cage is a very intense, passionate dude, and if he wants to make a movie personal, there’s nobody else who does it quite like him'

Not to be overshadowed, Selma Blair (as Cage’s equally homicidal partner) is, in many ways, the film’s secret weapon. “She actually auditioned for Crank,” Taylor reveals. “She auditioned for the Amy Smart role. And from the second she walked in the room, it was, like, wow, this is just an amazing person. She’s so funny and so magnetic and so interesting. But I knew, someday, I’ve got to work with Selma, we’ve got to do something. And then lo and behold, ten years later, something like that, this just seemed the perfect thing. It’s my favourite thing I’ve seen her do, I’ve actually gotta say. She’s so good in this.

“The great thing she and Nic are able to bring to this and why they’re so perfect for it is those two, it doesn’t matter if you dress them up as the most conservative, mainstream suburban parents in the world, they’re never gonna be fully comfortable in that skin. And you can always tell that, simmering under that facade, they’re still punk rock. They’re still fucked up. And that’s exactly what Brent and Kendall needed to be. They’re these people who woke up one day and didn’t recognise themselves, and they don’t even understand the life that they’re in anymore – when we go from being those cool people to being mom and dad.”

Before we get into an inevitable query into the status of a third Crank film, we’re keen to throw Taylor a curveball and ask him something broad but tough: just what does he love most about both making and watching movies?

“Wow, that’s a good question. It’s one of those things where movies become a part of you early in life. If you catch that movie bug as a young person, it becomes more than just entertainment. It’s not really a pastime; it becomes sort of the way you look at the world. Your view of what makes life meaningful often coincides with things from movies, and you find yourself relating your life to things in movies in weird ways. Your kid is born and you’re like 'this is just like that moment in such and such a movie'. And then when you start making them, really you’re just translating your own experiences on to the screen. It’s a way you communicate.

“Even with something like Mom and Dad, I’m a parent myself and a movie like that is really just a shouting out into the void and saying ‘There are a million people out there who I’ve never met, but do you understand what I’m saying? Do you get me? Can we communicate on this level?’ Without it, life becomes very isolated and lonely. The joy of making movies is in finding when moments work.

Finally, on the subject of a potential return to Crank, Taylor is a little uncertain: “These days, things are so insane in the real world that the Crank movies almost seem pedestrian by comparison. The thing about Crank is Crank 2 [Crank: High Voltage] is actually my favourite. And Crank 2 is sort of exponentially more fucked up and insane than the first one, so I feel like the proper way to do it would be that 3 would have to be as exponentially fucked up as 2 was to 1. And I just don’t know if the climate is really ready for that. I think it would even be hard to make Crank these days. Those are very politically incorrect movies, and to really do it right, to do a movie that Crank fans would like and that I would like, that’s a hard movie to make. It’s a hard movie to get made. But we’ll see. Me and Mark, we’re brothers for life. I talk to him all the time, so certainly it would be a fun thing to do some day.”

We suspect we’re not the only ones to suggest a third film should feature Cage as a villain, and that turns out to be correct: “You’re not the first to say that to me. Nic sort of exists in the Crank universe, just in real life. The Crank cinematic universe would have Nic Cage as Nic Cage.”

Mom and Dad is released 9 Mar by Vertigo Releasing