Theatre vet Benedict Andrews makes his film debut with Una, an adaptation of David Harrower's play Blackbird. We talk to the director about stars Rooney Mara and Ben Mendelsohn, Bergman, and the difficulties in making a film about child abuse trauma

“In retrospect, I understand what a motherfucker of a thing it is to get made.” We’re speaking to Adelaide-born, Reykjavik-based Benedict Andrews, who's currently in London directing Sienna Miller and Jack O’Connell in Cat on a Hot Tin Roof on the West End stage. The aforementioned “motherfucker” we’re here to discuss, though, is his filmmaking debut, Una, an adaptation of Scottish playwright David Harrower’s Blackbird, starring Rooney Mara and Ben Mendelsohn.

“It’s the type of film that doesn’t often get made,” he tells us, “and then doesn’t often get a theatrical release when one does because it’s a really tough subject matter.” Harrower’s Blackbird, for those unfamiliar, is a two-hander that depicts a young woman, Una, turning up at the workplace of a middle-aged man, Ray, who, 15 years prior, sexually abused her when she was 12. The two engage in a long, gruelling confrontation concerning both his imprisonment and subsequent new life under a new name, and her continuing struggles to understand the abuse and her conflicting emotions, which, amongst others, include what she felt were feelings of genuine love during their earlier time together.

Key to Andrews' decision to adapt Blackbird for his feature debut was the attachment he’d formed to the material. “I’d directed the play and it had really stayed with me,” he says. That production was in Berlin in 2005. “In the phase after directing it, I’d gone, ‘Fuck, this could be an amazing film.’ That kind of shock and adrenaline and rawness of the encounter between these two people had fascinated me back then.”

In the intervening years, he'd enquired about the rights. “It had been in various [stages of] development – same producers but different directors. But it didn’t really happen.” The play's cinematic possibilities kept him interested in the project, however. “What could you open up that theatre couldn’t do, that cinema could do about the experience of time, memory and events from the past coming into the present? I’d found that really exciting and was disappointed the rights weren’t available – and then just by a whole series of weird, freaky cosmic coincidences they were.”


The film version includes new supporting characters and third act events set away from the confines of Ray’s factory. “David [Harrower] knew of my work, so he was excited and it just kind of went from there,” explains Andrews. “There was a draft that existed already; some things had already been opened up in that. Very smart decisions had already been made; Scott [a colleague of Ray's, played by Riz Ahmed], he’d been invented already. We started working through it, and I think because I had the play in my bones, it wasn’t like I was at square one of just trying to work out what it was.”

As Andrews mentions, even with the rights acquired, getting the film made was no mean feat. “I understand why they, for X amount of years, had various adventures and it didn’t happen,” he says. But once the wheels were in motion, it all happened rather quickly, or as Andrews puts it, “the stars aligned”.

Mara was always his first choice for Una. “Rooney knew of me a little because she’d been working with Cate Blanchett [on Carol], and Cate and I had worked together,” he explains. “I’d said to her, either via Cate or via her people, ‘Look, she’s my first choice for this role. Is she into it?’ Then word came back immediately: she’d love to meet, she loves the play.”

With Mara and Mendelsohn as the leads, Andrews had two of the most fascinating and demonstrative faces in cinema with which to work; their visages proved inspiring. “There are incredible shots of Rooney’s face reflected in the glass of the vending machine or in mirrors,” recalls Andrews. “That’s discovered from the camera watching her. The different faces she has throughout the film, and the way the camera can capture that beguiling beauty that she has and her incredible elegance mixed with complete rawness and vulnerability. She’s extraordinary, she really is. She’s a great, unique face of cinema and every inch a movie star.”

What of Mendelsohn? “I’ve known Ben for a long time,” says Andrews. “I’ve directed him in the theatre. And I remember that moment where you see his mature face in Animal Kingdom and it’s like you’re looking at a mythic landscape. He has such a grain of truth and experience in his face and such light in his eyes. His, in a very different way, is the face as pure cinema.” 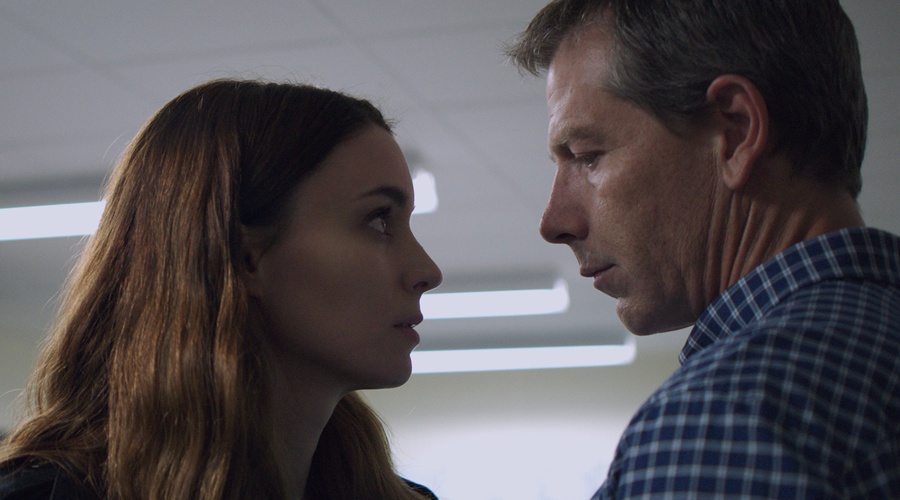 Andrews explains that these faces became his centre of interest. “I won’t say there are more close-ups, but the film, as it goes on, starts to become a kind of study of faces. I’m very influenced by [Ingmar] Bergman. As a theatre-maker who starts to make films, of course he’s an important influence for me. But I only started to realise in showing the film in festivals that that study of the face, and the face as pure landscape that’s so essential in Bergman, was starting to come out in watching their faces.”

With the camera focused on Mara and Mendelsohn, Andrews settled on a graceful approach to visual storytelling. “We’d worked out a method that we didn’t shake from. There’s not one handheld shot in there. There would be one version of this story where you’d have two handheld cameras shooting it like a boxing match, and we deliberately decided to enhance the sort of claustrophobia of the story. It’s often very fixed frames, slow push-ins. So we had that system, but I was very open to things.”

In wrapping up, Andrews tells us he’d prefer his next film to “come from more purely cinematic ideas,” rather than from a play, but he also addresses the prejudice that is often applied to stage directors transitioning to cinema. “I don’t think there should be any bias, because some of the great filmmakers have been theatre-makers: Bergman, Visconti, Fassbinder. I think there can be a stigma if you’re not aware of this essential alchemical shift that has to happen between forms. You can be the same artist but draw on different things. Bergman, he’s a great example of that because his films draw on everything that was singular to him as an artist that he’s exploring when he does Ibsen or Strindberg in the theatre, but every film he makes is questioning what a film is and exploring the boundaries of what filmmaking is.

“Now in [Una], I think there’s bits that really open up into pure cinema and also use editing and filmmaking. And there are others where you feel, maybe deliberately, [that] this is almost like theatre for a moment; the two of them are locked in that room, pushing each other around in one long take. Not everyone will like that tension, but I like that you feel that tension. But I never wanted it to feel like an exercise in filmed theatre, I wanted it to always become something else. Or not be like just some polite opening up of the play – August: Osage County or Fences, where it’s still a play that’s been nicely filmed. The task we set ourselves was that it exists as cinema.”

Changing the name also lets Andrews' film stand alone from its stage origins. “We shot it as Blackbird, but when we were cutting it there were a few other films already or about to be called Blackbird. And I was like, fuck this, there’s not gonna be anything else in the world that exists with this title.”