Barry Jenkins on If Beale Street Could Talk

Barry Jenkins follows Moonlight with an adaptation of James Baldwin's heartbreaking If Beale Street Could Talk. As with his Oscar-winner, the results are bittersweet and beautiful

Miami-born filmmaker Barry Jenkins has worked his way to the centre of Hollywood’s attention in a stunning, enviable trajectory. After graduating Florida State University in 2003 and premiering his first feature – the $15,000-budgeted Medicine for Melancholy – in 2008, he beat the ‘sophomore slump’ in style. Jenkins followed his eight-year hiatus with the achingly intimate, multi-Oscar-winning epic Moonlight in 2016.

“I thought I was making Moonlight in obscurity,” says Jenkins. “And then it ended up at the centre of this thing. Which was a very privileged place to be, and now I don't get to work in obscurity any more. So I've got to reconfigure what my relationship is to my work. And what I'm trying to do is not make work acknowledging the expectations. I like to work about process, not results, but it's really difficult to not be aware of potential results when you've been to that place where we were with the previous film!”

His new film, If Beale Street Could Talk, does not attempt to dwarf Moonlight in scale, but it’s another ambitious project dealing with love, pain and African-American experience. An adaptation of James Baldwin’s 1974 novel of the same name, it centres on 19-year-old Tish and 22-year-old Fonny, childhood friends who've grown into lovers as adults. These soulmates are wrenched apart when Fonny is falsely accused of rape, having been framed by a racist police officer. While her fiancé awaits trial, Tish realises she's pregnant.

There is frustration and anger in the story, but there is also intense longing and idealisation. In collaboration with a team that includes cinematographer James Laxton, with whom the director has worked since film school, Jenkins has created a work of tableaux that linger on black beauty, and of the magnetism between soulmates. The imagery, as in Moonlight, has an emanating, ethereal quality. Jenkins explains that those mechanics come from the need to immerse viewers in the characters’ subjectivity. 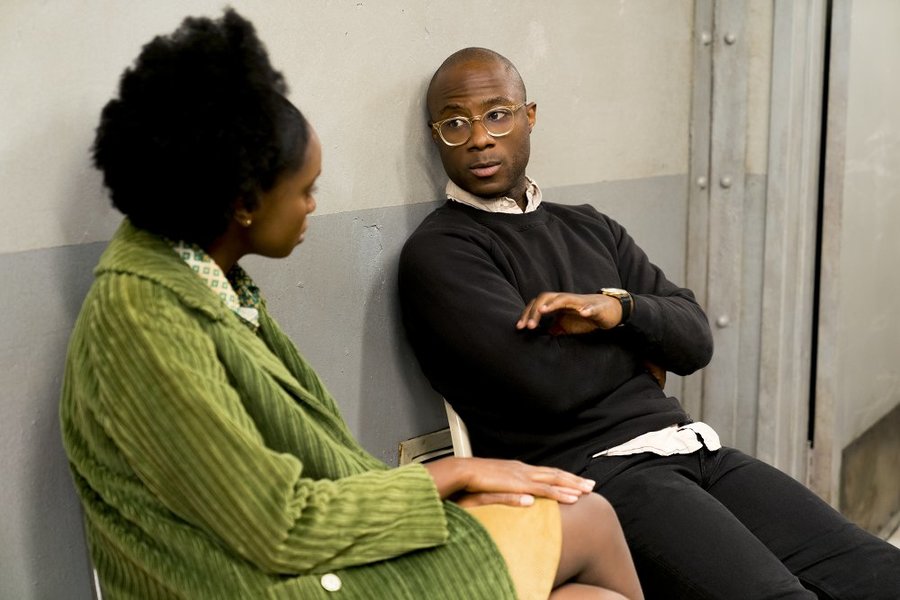 “The biggest thing for me was the point of view,” he says. “The book is written from Mr Baldwin's point of view, but the film is told from Tish's point of view. And so it's really a series of memories – a series of dreams, memories and nightmares. And when you frame it that way, you know, a 19-year-old girl's memories of her first sexual experience, of the first time she made love, first time she realised that a young man thought she was beautiful – that then frees you from the restrictions of realism, or from the restrictions of genre or story form.

“And so now, when she's remembering these very bright moments, they can be saturated, they can be quite golden, these golds and these greens. And that's totally fine, because I know I'm working from the consciousness of a 19-year-old girl; it's not about making a factual document of what New York looked like in 1974. If you're trying to hold on to a vision of something, you've gotta create that vision in your own image.

“This cape that Tish wears is almost uncommonly beautiful. But that's how she sees herself. That's how she wants to remember herself and these moments. And when the cop appears, it's almost nightmarish, and his face is all pockmarked, because to her he's not even a human being, he's a demon in a certain way.

“And so we tried to just channel everything through her; what does this feel like coming through Tish? And I think in that way you arrive at an image that is at times almost impossibly beautiful, impossibly saturated.”

In Medicine for Melancholy, a young man and woman who have had a one-night stand, even though one of them is in a relationship, try to have a special adventure while racing against time and facing a changing San Francisco. In Moonlight, two young men snatch a secret moment of homosexual love as teenagers, and try to reconnect years later after time and jadedness have worked on their hearts. In Beale Street, the love of Fonny and Tish, played with gorgeous sincerity by Stephan James and newcomer KiKi Layne, is roadblocked by America’s systemic incarceration of young black men. So all three of Jenkins’ films so far have been about African-Americans trying to find connections of love over gulfs or obstacles.

“I think that's been my experience of what it's like to be black in the world,” says Jenkins. “I'd like to think that everything is the same experience for all of us, but in my experience that is not the case. Particularly for black people in America. And yet love and romance are these things that we can all relate to. It's a very universal feeling. You know, even Nazis were married! People who enslaved black people were married, they had families. And so we can all relate to relationships, no matter how evil or good we are, black, white, gay, straight, whatever – it's the common thing for all our lives. So for me, that's the best frame to tell a story through. And yet over the course of time, love stories, romances, have become anaesthetised in a certain way, that it's just about the love, and always divorced from the circumstances of society, or the social condition.”

Whatever falls away from the characters in If Beale Street Could Talk, love endures. “[The book] combines the two voices of Baldwin,” explains Jenkins. “The one voice that wants to write love stories about very passionate romances, sensuality; and the other voice that wants to talk very clearly about society, particularly American society, and the ways in which this affects the lives of black people.”

Jenkins perhaps leans closer to the romantic side of Baldwin. In his adaptation, Baldwin’s ending has been changed, removing a plot development that leaves the book on a note of howling, loose-ended despair and adding a scene which both speaks to the greater societal issues and affirms a note of resilience. “We filmed a version of the ending that is very faithful to the ending of the book, but as you said, that ending is pretty tragic. And the story itself is tragic in certain ways, but I felt like with the work with the actors, and building the characters, that ultimately we were telling a story that was more about hope. Not necessarily uplifting, but more about hope and perseverance.

“I just wanted to extend the narrative and make it very clear that despite the horrors, despite the struggle, that the family unit was still intact. And so we decided to actually show the family, that Tish and Fonny's child is healthy. Kind of a confirmation of the thesis of the book, which was to me this idea that, you know, black people, these black families, any way they find to build communities – these Beale Streets so to speak – that that is the thing that protects us, and gives us the strength to endure. So I just wanted to end on an image of strength for the family. It wasn't a very light decision, but I feel like it was the proper one.”