Mamoru Hosoda's animations beautifully explore childhood and family. His latest, Mirai, is also a game changer in being the first anime to premiere at Cannes. He tells us about being inspired by his kids and his dislike of Disney's live-action remakes

In conversation with Japanese writer-director Mamoru Hosoda, he cites childhood and how young people change as a recurring theme that unites all of his original stories. As such, it seems strangely appropriate that we end up introduced to his own children during our interview. Having just told us that his latest animation, Mirai, is inspired by his kids, we ask him if any of the film’s characters were directly informed by his own brood, which leads to us being shown a family portrait on his phone. “Do you want to see my kids’ pictures?" he asks. "They even look similar.” Sure enough, a lot of the people pictured in the photo resemble the character designs in the film. “The father is different,” he concedes. “Obviously, I’m not that good looking.”

Although staged on a comparatively smaller scale to other Hosoda films like Summer Wars and The Boy and the Beast, Mirai still has an element of fantasy informing its portrait of family relations. It’s closer in spirit to his excellent drama Wolf Children, which spanned several years in the lives of a pair of lycanthropic children and the human mother struggling to raise them. Mirai also features troublesome children, though its exploration of time comes through the unique hook of a magical garden enabling a young boy to encounter his relatives from different eras, with a future older version of his younger sister Mirai acting as his guide.

Despite the fantastical scenarios in which they're set, Hosoda’s films regularly contain some of the most realistic depictions of children’s behaviour and thinking in contemporary cinema, be it animation or live action. Mirai is no exception. “I think when I became a parent,” he says, “I thought I'd be the one teaching my kids things, but I learn a lot from them. The four-year-old boy character is my son, but at the same time, he’s me. And I felt like I was directing the film as a four-year-old myself. So, I think that's probably why it looks sort of realistic. Although, I was quite a disciplined four-year-old-boy while making this movie.”

Thanks to the efforts of distributors like Anime Limited and Manga Entertainment in collaboration with National Amusements, as well as the annual Scotland Loves Anime festival, it’s the best time it’s ever been for British animation fans to see anime features on the big screen with regularity. We wonder what sort of state Hosoda finds Japan’s theatrical industry for anime in right now. “I think we're doing pretty well with box office hits,” he says. “We've got really good amount of animation movies, not just in feature films, but television. We've got quite a lot of animation going on. I think we are in a better position than ever before. I think everybody's really trying to keep animation movies in the mainstream. I think animation can be just one of the techniques, methods for movies. I do believe in possibilities in animation and also animation’s widening potential for filmmaking. I think we're in a very interesting time.” 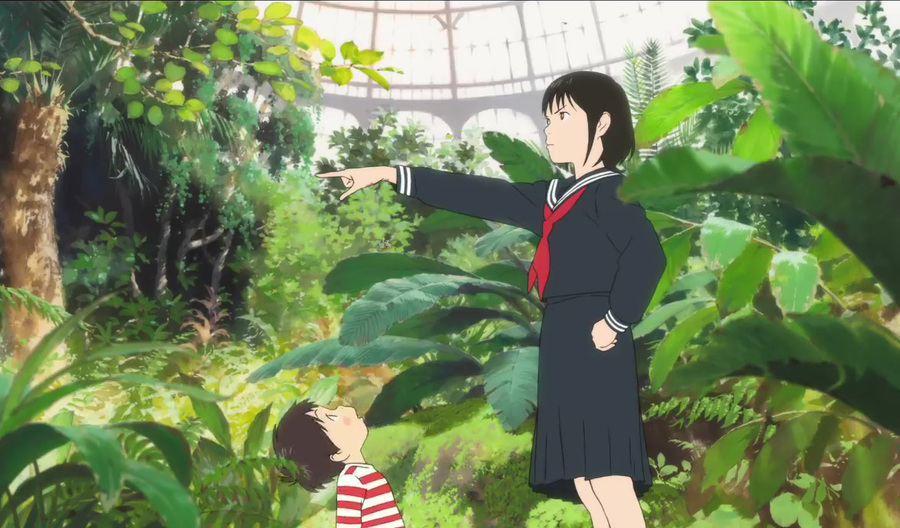 Speaking of widening potential, Mirai has the status of being the first anime feature to ever premiere at Cannes, which happened this past May. “It was totally unexpected,” Hosoda says of that experience. “I never thought that was going to happen, it was such an honour. But I think it’s a good trend. There's no barrier between animation and live action. I mean, Annecy [International] Animated Film Festival derived from Cannes, so I thought Cannes wouldn't deal with animations, but we got invited and we were there, so I think it's a big shift in trend and I'm really pleased. I think the whole film industry is changing, so animation isn't a category anymore. They look more at the stories of animation movies, rather than the fact it’s made in animation. I think that animation is one method for filmmaking, it’s not a genre or category. I think the general public's perception of animation is changing, as well.”

Animation directors often get asked who their influences are among fellow animators, but we wonder if any live action filmmakers have had a major influence on Hosoda. Instead of a writer or director’s name, his nomination is just one film. “To choose one,” he answers, “I’d say [Victor Erice’s] The Spirit of the Beehive. I saw it when I was at art college and I was totally shocked and I wanted to make a movie like that. I wanted to become a filmmaker after seeing that movie and I wanted to make it my job. It’s been 30 years since I first saw it, but I’m still trying to learn from it. I'm sure pretty much all of my films are influenced by that film.”

One of Hosoda’s films, The Girl Who Leapt Through Time, which was based on a novel, has also received a live-action adaptation. We wonder if he feels the stories of Mirai and Wolf Children, for example, could only work in animation. “As an animation director,” he says. “I choose stories that would suit animation the best. I have gotten asked if I want to turn any of my films into live action, but I simply think that's just meaningless. Actually, somebody asked me to direct a live action version of one of my animations, but I really just don't see the point... I consciously choose animation because for that particular work, animation works the best."

As he continues, we realise we might have broached a touchy subject, but Hosoda remains jovial while expressing dismay about a certain trend related to the connection between live-action films and animated ones: “I actually do get frustrated about live-action versions of animation because the general concept, probably, is that live-action films are superior to animations. So by making a live-action version, they think that they are trying to improve the animated movie. No, that's not true. Or people may think live action may be better for being accepted by a general audience. I don't think that's true. It’s all about good stories, good movies. It just happens to be through animation, it’s not better or worse because of that. I think we should be given artistic freedom to express or tell our stories, be it animation, be it live action. It could be a musical, it could be paintings, music, whatever. I chose animation because I want to tell my stories in animation, but definitely making it in live action wouldn't improve anything at all. I feel really strongly about that.”

We suggest that we can think of one big American studio that should probably stop remaking all its beloved animations into live-action films. “I love Beauty and the Beast, Snow White,” says Hosoda. “The Disney animations were fantastic. Why do you want to make a live-action version of it? And what annoys me the most is they don't respect us. When they turn them into live-action movies, sometimes they don't respect the original and think, okay, live action, we could make more money out of it. No, it's not the case. At least they should respect the original.”

Mirai is released 2 Nov by Anime Limited and National Amusements