We speak to Alejandro Landes about the extraordinary Monos, a war thriller set during an unnamed conflict. He discusses creating an allegorical film that's fluid in terms of genre and political ideology as well as its characters' gender identities

Monos, the third feature from Brazil-born Colombian-Ecuadorian director Alejandro Landes, will make your jaw drop. It’s a hallucinatory assault, taking you high on to a mountain ridge, way above the cloudline, where a ragtag group of teen soldiers (both boys and girls) prepare for war. Who they’re fighting, we’ve no clue. Where they are is a mystery too, although the language they speak (Spanish) and dramatic highland setting suggest somewhere in South America (the film was shot in Colombia). We’re not even sure when the film is taking place.

We’re introduced to a team of fresh-faced grunts with intimidating codenames like Rambo, Bigfoot, Wolf and Boom Boom, but their baby-faces and peach-fuzz moustaches can’t quite live up to the fearsome monikers. Their de facto leader is an adult called the Messenger, but he’s towered over by all the kids, even the one dubbed Smurf. He puts them through strange callisthenics and army drills that recall the idiosyncratic workouts performed in Claire Denis’s Beau Travail. Their chief responsibility is to guard an American prisoner-of-war they call ‘Doctora’, although the reason for her abduction is never made explicit. Despite their rigorous training, this guerrilla platoon is still a bunch of hormonal teens – so partying, irresponsible use of semi-automatic weapons and sexual dalliances are never far off.

We meet Landes in London’s West End, a few days before Monos will pick up the top prize at London Film Festival, winning Best Film in the official competition. He tells us his fuzzy approach to time and location in Monos comes from two places. First is his feelings towards the Colombian conflict, an asymmetric war between the government of Colombia and communist guerrilla fighters that has been going since the mid-60s, with a bilateral ceasefire only announced in 2016.

“The civil war has been raging for 60 years, on so many fronts, and it's been talked about in the newspaper, at the dinner table and on TV to the point of saturation,” explains the 39-year-old director. “So now that my generation is having its first chance at peace, I wanted to create a sort of political allegory to talk about this very moment in a way that's subversive, in a way that's fresh, and in a way that basically goes around all those prejudices.” 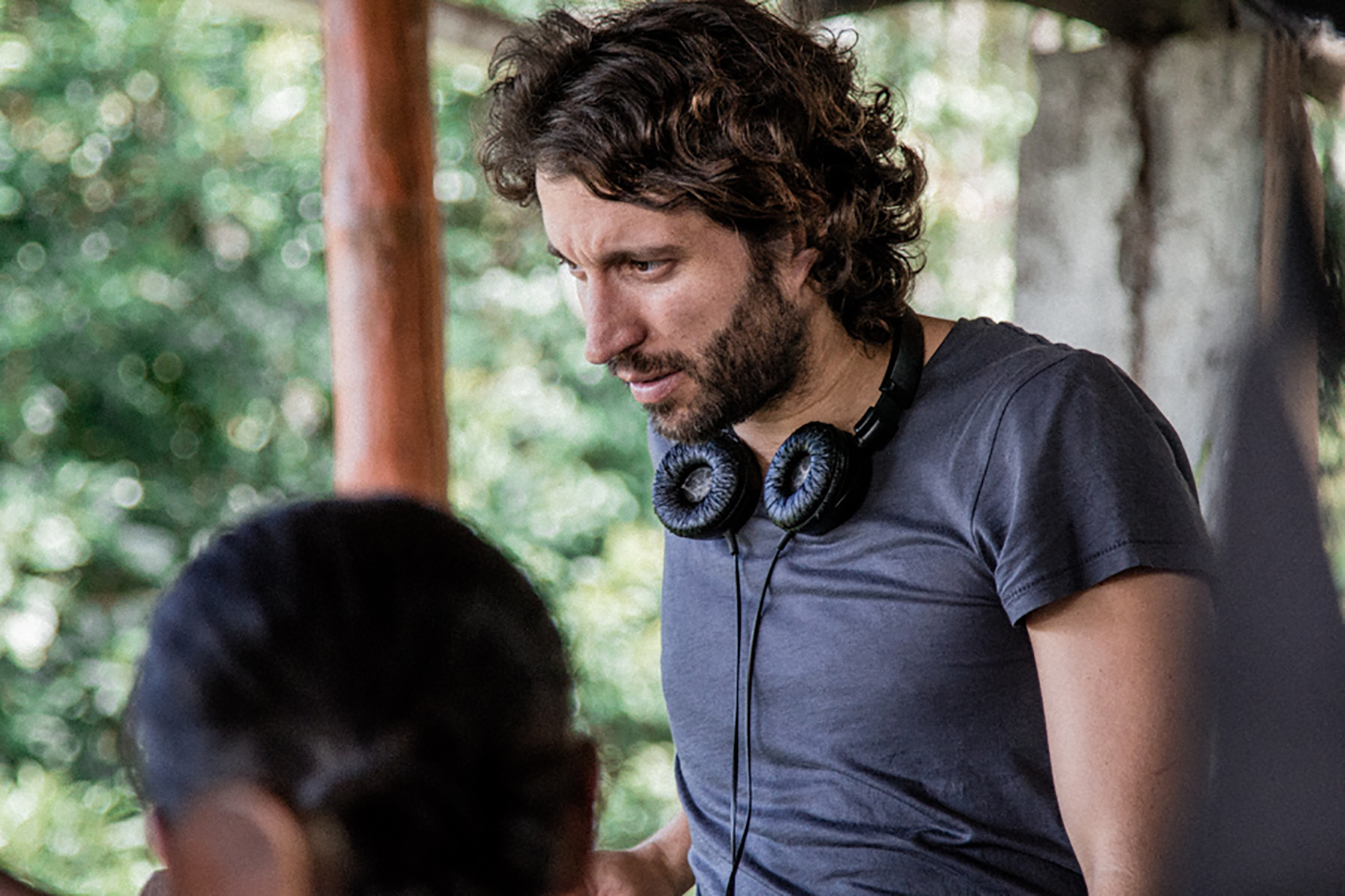 He also reckons that not knowing exactly who is fighting whom and for what reason is pretty typical of modern warfare. “Think of the wars of Syria, Iraq, Afghanistan; these are conflict fought from the back lines, no clear idea of the end or what winning is,” says Landes. “Alliances keep shifting, the uniforms are not distinctive, there's a lot of clandestine special ops – that type of thing that creates that fog of war.” Like with sculpture, the negative space Landes creates around Monos is just as illuminating as the form that we can see. “It forces you to latch on to the humanity of the fighter,” he suggests. “So you don't know whether they’re fighting for the left or the right, and in the same way you don't know whether Doctora is a hiker or an NGO worker or a CIA operative.” It’s an effective technique, leaving you free to abandon your personal prejudices and experience the film in the present.

We’re first introduced to Rambo, Bigfoot et al while they’re playing a game of football while blindfolded. It’s an image that sets up what’s about to unfurl – children at play in a war whose rules of engagement they’re blind to. It also suggests for a moment that war can be fun. “It's funny, I read a diary in The New York Times a couple of weeks ago by a guy who went to go fight in Afghanistan,” Landes recalls. “He was 18 years old, parachuted in and he was really excited. He’d been preparing using video games as training, and then lands in this situation and all of a sudden people are shooting at him; it could have been written by one of the monos. It's not just in a scenario like this with a guerrilla operation, but even in the most well-financed and equipped armies you have that situation where people have an almost playful view of it.”

That’s what army advertising implies, we suggest to the director. It tends to make joining the army look like going on a gap year. “Exactly,” says Landes. “What is it the commercials say, ‘Be All You Can Be! Be in the Army’. That idea of belonging is very powerful, particularly at that age when you have a big sense of wanting to be part of something bigger. A lot of people think that child soldiers, they end up there because they're just forced. But a lot of them, they go there to be part of something that's bigger than them.”

As well as being out of time, Monos often feels out of this world. Landes’ use of surreal imagery and time jumps creates the impression of a waking dream that becomes increasingly feverish as the movie progresses. “Sometimes the film looks entirely otherworldly and then it presents you with an image that's almost like a pop image, which is like the pig's head on the stick,” says the director. It’s an image that pretty much every critic has picked up on – although Landes rolls his eyes at the idea this is some clue to his film’s connection to William Golding’s classic story of children run riot in the wilderness. “Oh come on,” he says. “Some critics were like, ‘Wait, Lord of the Flies!’ That image is on the cover of every single textbook that's assigned reading for half the world when they turn 11 years old – it's almost like Warhol’s Campbell's Soup Cans.”

Adding to the film’s fairytale quality is a beguiling score from genius composer Mica Levi (Under the Skin, Jackie). Like the images in Landes’ film, it’s full of contrasts, dancing from twinkly electronic sounds and lyrical wind arrangements to bone-rattling drones. “Mica came on board when there was already an unfinished cut, so I think she really connected with the temporal, disoriented notion of time," he explains. "And even the production design: the uniforms, some were inspired by old Russian uniforms worn to go into Crimea without a flag, and some were inspired by old Rastafarian rebel movements, and some were inspired by Colombian illegal armies. And so Mica, she likes that mash-up as well, so we did everything from digital sounds that sound like they come out of a Berlin nightclub to like a traditional string quartet to that very primal kind of a whistle you hear that's was just Mica blowing into a bottle.”

The film begins as an ensemble piece, but as alliances shift and morph within the group, one of the grunts emerges as our chief protagonist. Their character name is Rambo, played by newcomer Sofia Buenaventura, although when Landes first saw Buenaventura he believed their name to be Matt. “I was watching this casting video where a bunch of boys were playing basketball,” he recalls. “I said, ‘I like that boy for Rambo,’ and everyone was calling them Matt. The other kids were all screaming ‘Matt, Matt.’ And it turned out Sophia's nickname is Matt because sometimes she goes by Matt. And so that was kind of very inspirational for the character because I saw so many videos, I became blind to gender and I was like, who cares? Because it doesn't change the deeper sensations of the film.”

Buenaventura isn’t the only actor in the cast with an androgynous look, but pleasingly the characters’ gender identities stay in the background of the drama. “If their sexual identity or their gender became the defining conflict and characteristics of the characters, then it would be like a film from the 90s,” explains Landes. The fact the characters don’t conform to traditional gender cues also chimes with the fluidity in the rest of Monos: of political ideology, place, time and genre styles. “Exactly,” says Landes. “Just like the left or the right politically, because you look at a paramilitary army like this or a gorilla army: at the heart of it, we’re all pretty much the same.”

Monos is released in UK cinemas on 25 Oct. For more information visit www.monos.film