As with almost every film festival in 2020 since the start of March, Fokus: Films from Germany, presented via a partnership between the Goethe-Institut in Glasgow and Edinburgh’s Filmhouse, is moving online for its sixth edition. The now fully-digital festival, running from 3 to 17 December, will be shorter and smaller than in previous years, moving from its usual late-November start. But despite the (hopefully) one-off format that won’t involve any cinema screens, the event should still offer an exciting snapshot of Germany’s contemporary film scene.

Producer Florian Koerner von Gustorf – a regular collaborator with Christian Petzold (Transit, Phoenix, Barbara, the upcoming Undine) – makes his own directorial debut with What Might Have Been. It's a romantic drama that looks to have a touch of Petzold about it in its intertwining of passion and trauma linked to societal upheaval. It follows a woman in her late 40s named Astrid (Christiane Paul), who has fallen in love with a man named Paul (Ronald Zehrfeld, of Phoenix and Barbara), with whom she heads on a weekend trip to Budapest. But while there, she bumps into Julius (Sebastian Hülk), her first great love, who she met in the GDR just a few years before the Wall fell.

Debuting at this year’s Berlinale in February, writer-director Eliza Petkova’s A Fish Swimming Upside Down also explores a complicated love triangle. In this case, it's between a father, his son, and the father's new girlfriend who initially fills the gap left in their household after their wife/mother dies, only for an attraction to form between the younger man and the surrogate matriarch. Another three-hander tale can be found in writer-director Michael Fetter Nathansky’s drama You Tell Me. It’s one story told from three different perspectives, in which the apparent answer to questions of who is the victim and who is the perpetrator shift with each change in POV.

Another Berlinale 2020 premiere, Sisters Apart, from writer-director Daphne Charizani, chronicles Rojda (Almila Bagriacik), a German soldier and native Kurd, volunteering for a mission in Iraq to train female soldiers to fight ISIS. But unbeknownst to her higher-ups, Rojda deliberately requested redeployment there to find her long-lost sister.

A largely improvised film made before the pandemic’s global effect on the hospitality and music industries that likely has a different feel now, Christian Klandt’s Leif in Concert uses a pub setting as a microcosm for society; a portrait of a music bar and its patrons, their issues and longings. For anyone who enjoyed Bloody Nose, Empty Pockets at the digital London Film Festival in October, this could be very much up your street.

On the documentary front, Chichinette: The Accidental Spy explores the life of Marthe Cohn, a French-Jewish woman approaching 100, who was a spy in Nazi Germany during the Second World War, delivering vital information about troop movements to French forces. Having never spoken about her experiences for 60 years after the war, she now travels the world to entertainingly and passionately tell her story of risking life and limb, all while losing some of those dearest to her during the conflict. 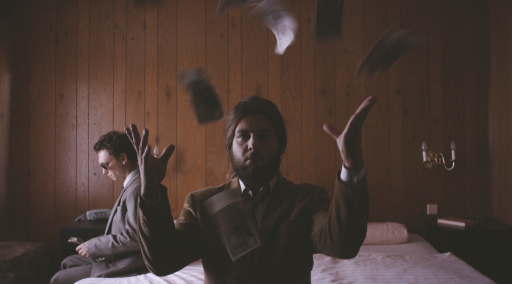 Elements of documentary are also present in Sven O. Hill’s hybrid feature Coup, which incorporates animation for its study of a rocker who ended up pulling off a robbery of 2.5 million marks in Hamburg in the 1980s. His plan: to disappear to Australia, where extradition was not allowed, for a life of luxury. The dilemma: his girlfriend doesn’t want to follow him to the land down under. [Photo: Sven O Hill]

Back to fiction, Erik Schmitt’s Berlin-set Cleo reportedly has an air of Michel Gondry’s The Science of Sleep about its fantastical reckoning with its title heroine’s past, in which a treasure map dating back to the Weimar Republic era is said to lead to a magic clock that can reverse time. It apparently includes appearances from historical figures dispensing valuable advice, from Albert Einstein to Marlene Dietrich.

Finally, Naked Animals, which also debuted at Berlinale this year, is said to be an intense and electric debut feature from writer-director Melanie Waelde. Centred on five dysfunctional young people in provincial Germany, living largely without adult supervision in their last winter together before they leave school, it’s a coming-of-age film as more of an ethnographic study.

Fokus runs online 3-17 Dec
Tickets available at goethe.de/en or via websites of participating cinemas, which include Filmhouse, GFT, Ayr Film Society and The Byre Theatre