Catalan director Pere Portabella – confined to his native Spain by General Franco’s regime for his part in producing Luis Buñuel’s 'blasphemous' Viridiana a decade earlier – had been looking for a way to produce a revisionist Hollywood genre picture, with a stated aim to both deconstruct and demystify the process of industrial cinema, and push the medium forward. When the director heard that Jess Franco was scheduled to shoot a faithful adaptation of Bram Stoker’s Dracula with Christopher Lee in Barcelona he asked permission to film the production with his own crew.

The resulting film, Vampir Cuadecuc, contains echoes of the great early vampire films by Dreyer and Murnau in the drifting, high-contrast black and white photography. Portabella, with one notable exception, strips his images of dialogue and diegetic sound, and instead impose upon them Carles Santos’ varied score of dreamy music and harsh discordant sounds. The effect is gorgeously dreamlike, as the actors, who are captured alternately in character and as themselves, appear as automatons, moved by some shadowy unseen force.

Portabella playfully strings together moments of Franco/Stoker’s familiar narrative, but adds touches of documentary – such as shots of set dressers or actors applying make-up – in order to produce an unclassifiable, yet fascinating film that is neither entirely documentary nor fiction. It is ironic that as Franco toiled nobly to produce a true-to-the-text rendering of Stoker’s novel, Portabella used the same basic ingredients to simultaneously craft a radical, avant-garde mood piece that is among the most mysterious artefacts in cinema. 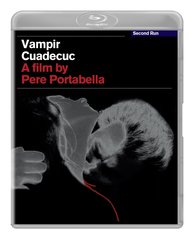 This beefy package includes two of Portabella’s recent shorts and a lengthy appreciation of Vampir Cuadecuc by writer and curator William Fowler. Most significant is an exceptionally insightful 29-minute interview with Portabella himself, in which the director skips lucidly between authoritative discussion of film theory and the nitty gritty of the production. [Tom Grieve]