The Man with the Iron Heart

This World War II drama starring Rosamund Pike and Jack O’Connell is prettily framed and powerfully acted, but doesn't leave an impression as the credits roll

Adapted from Laura Binet’s historical novel HHhH, Cédric Jimenez’s World War II biopic recounts the heinous rise of Nazi leader Reinhard Heydrich and the bold plot to bring him down. It takes an excellent, eclectic cast containing Rosamund Pike, Mia Wasikowska, Jason Clarke and Jack O’Connell, and gives each of them space to shine even if the film around them fails to quite match their lustre.

Pike is icy as Lina Heydrich, who builds her husband into the iron-hearted Butcher of Prague. Clarke, as that Nazi leader, meanwhile, is all cold, unfeeling fury. With a springing step and loving eyes, O’Connell plays a plucky young resistance hero. Even Stephen Graham is good, once again stepping right up to the line of caricature in his portrayal of Heinrich Himmler, but never letting a toe slip over. Jimenez draws the very best out of every member of his ensemble while delighting in his own starring role as director, never missing an opportunity to show off his eye for a stylish shot.

In an early montage depicting the Heydrichs’ blooming romance, Jimenez skips through a scrapbook of movie clichés – the camera spinning joyously as they dance together, their hands finding one another in the dark of a cinema – with impish delight at the fluffy vision of these two monsters. There are times when his desire to display his visual prowess begins to feel a little overbearing but The Man With The Iron Heart is, without question, a damn fine looking film.

Ultimately, though, it never finds a shape for all the talent it contains. The plotting and pace feel undesigned, moving from one scene to the next with little sense of narrative momentum. Each scene itself is so prettily framed and powerfully acted that this absence is felt less during the film than afterwards, the sum of these excellent parts drifting too easily out of memory once the credits roll. 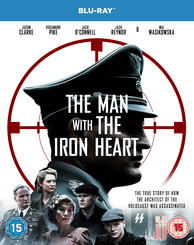