The recently departed Japanese director Seijun Suzuki has had a resurgence of late in the world of British home distribution. Though a couple of his more famous films – like pop art classic Tokyo Drifter – got put out with middling transfers by small companies in the early aughts, the last few years have seen labels like Eureka’s Masters of Cinema, and, particularly, Arrow Video, raid the man’s archives for some remastered pleasures.

With Arrow's latest package, the distributor is on its third Suzuki box set in as many years, and interest in the filmmaker’s output is evidently high enough to justify a collection bundling together some of his earliest efforts, all of which are making their home video debuts outside Japan with this release.

Focusing on Suzuki’s youth-centred movies, the films assembled here rarely branch into any of the eccentricities the director would later become best known for with offbeat works like Branded to Kill. That said, the likes of Teenage Yakuza (1962), The Incorrigible (1963), Born Under Crossed Stars (1965) and The Wind-of-Youth Group Crosses the Mountain Pass (1961) all showcase his talent at injecting verve into even the simplest-seeming stock tales.

The oldest film in the set, The Boy Who Came Back (1958), is a particular highlight in its portrait of a tempestuous hoodlum struggling to make a clean break after various stints in reform school and the relationship he forms with the young woman assigned to aid his transition back into society. It’s notable for being Suzuki’s first collaboration with future regular stars Akira Kobayashi and Jo Shishido. 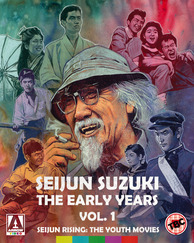 Arrow Academy’s limited edition boxset – only 3000 copies are being produced – is a dual format collection, providing buyers with both Blu-ray and DVD. The few special features include an introduction to the films by critic Tony Rayns and a selection of trailers and stills from films’ original release. The set also includes a 60-page illustrated book that features new writing by critic and author Jasper Sharp. [Josh Slater-Williams]