A fascinating and absorbing western starring Veronica Lake, whose character comes across as a noir femme fatale who's been dropped into the middle of cattle country

Veronica Lake might not be the first actress you'd think of to play a no-nonsense ranch owner, but she is outstanding in Ramrod, which was directed by her then-husband André de Toth. The masterstroke of the film is that she plays it like a classic film noir femme fatale who has been dropped into the middle of cattle country, and uses her feminine wiles to control the men around her. She's determined to do things her way, she says, “and being a woman I won't have to use guns.”

It takes a while for Ramrod's narrative gears to slip into place, but this soon becomes a fascinating and absorbing western. As Lake and her right-hand man (McCrea) face a campaign of intimidation by cattle baron Frank Ivey (Foster), de Toth develops a slow-burning tension and stages a number of scenes as a series of power struggles, with Lake at the centre of them all. The violence, when it occurs, is abrupt and brutal, with one prolonged beating having a particularly savage edge to it. Ramrod is a tough and stark western, but it's also a remarkably beautiful one, thanks to cinematographer Russell Harlan's elegant, shadowy images, and de Toth's imaginative direction. 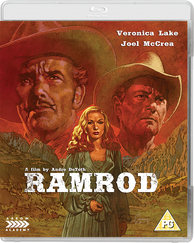 Both the commentary track by Adrian Martin and the video appreciation by Peter Stanfield are well-researched and illuminating, placing Ramrod in context both within its genre and its era, but the real draw here is André de Toth himself. In an audio interview with Patrick Francis, he offers some interesting nuggets of information (after a little prodding), and he is on highly entertaining form in a 1994 interview that was filmed at the BFI to promote his autobiography Fragments. He has some great stories to tell, even if he does keep telling the audience to buy the book to read the best of them. [Philip Concannon]