A transition for Godard between his early pop masterpieces and the more politically explicit films that followed, La Chinoise alternately interrogates, skewers and champions the radical politics of the late 60s

Released in 1967, the year before the unrest of the May '68 uprising, La Chinoise, Jean-Luc Godard’s stylishly assembled depiction of a young Maoist cell in Paris, alternately interrogates, skewers and champions the radical politics and political radicals of its time. The French-Swiss director reworked the flat he shared with his then-wife Anne Wiazemsky into the summer outpost of a fictional group of university students (including Wiazemsky and Nouvelle Vague icons, Jean-Pierre Léaud and Juliet Berto) who decorate it with bright primary colours, political slogans and stacks of Mao’s Little Red Book.

The group call themselves the 'Aden Arabie Cell' and over the course of their summer break, they debate and lecture each other on the Vietnam War, American imperialism and the split between Maoist and Soviet-style Marxism. By the end of the film the would-be revolutionaries have turned their theories into action with a plot to assassinate the Minister of Culture of the Soviet Union. To what degree the film and its director agree with their politics is up for debate: Godard treats the ideas seriously and sympathetically but frequently undercuts his bourgeois characters with sight-gags and moments of absurdity. Regardless, given the events in France the following year, La Chinoise would prove to be prescient and even influential.

Formally, the film is tremendously exciting, combining direct to-camera sections in which we can hear the director coaching the actors with dynamic camera movements and impeccable mise en scène. Meanwhile, students of cinema will recognise the film as a point of transition for Godard, part way between the narrative pop-masterpieces like Breathless and Bande à Part that made his name and helped launch the French New Wave, and the more politically explicit works that followed. 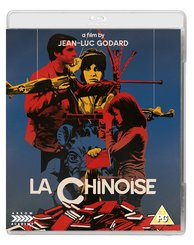 La Chinoise is easy to enjoy but difficult to fully parse. The Arrow Academy edition provides a wealth of contextualising material including new and vintage writing, audio commentary, interviews and contemporaneous footage of Jean-Luc Godard, cast and crew. [Tom Grieve]