Michael Cuesta’s American Assassin opens with Mitch Rapp (O’Brien) filming a home video of himself and his girlfriend (Charlotte Vega) splashing around on a sun-soaked beach holiday. Moments later, terrorists attack and she is gunned down while he helplessly looks on, greenlighting his transformation into a dead-eyed killing machine by the next time we see him.

As he infiltrates the cell responsible and is subsequently swept up into a CIA programme designed to create the apex predators of urban combat, the movie flirts with a few interesting ideas. The notion that the people whose homes have had hellfire rained down on them daily by a faceless, dispassionate foreign force might see their own revenge quests similarly to Rapp’s. That the military’s appeal to traumatised individuals with personal vendettas might be worth inspection. That the obsessive pursuit of vengeance only leads to more destruction.

Unwilling or unable to actually engage with any of these ideas, the film throws in a white American mega villain (Kitsch) to draw away from its political posturing, adds a helicopter and a nuclear bomb, and decides to be a goofy, globetrotting action flick instead.

It looks to Michael Keaton to redeem it but while he hurls himself into his role as the movie’s maniacally masculine father figure, even his eye-popping energy can’t shock a heartbeat into a script that turned up dead on arrival. Similarly, O’Brien and Kitsch are tasked with playing the “two sides of a coin” trope without enough character between them to make up one full person.

Without a ringer to elevate it, Cuesta’s film still manages to hold the viewer’s attention by keeping the pace high and fights frequent and crunching. Ultimately, it’s not a film designed for the attentive eyes of viewers who actively sought it out but for the half-engaged, hazy-eyed ones who stumble on to it flicking channels late at night. 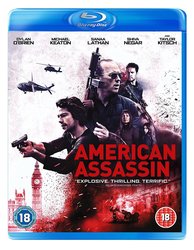 Highlight is an on-stage Q&A conducted at the Alamo Drafthouse, as well as some less interesting character featurettes. [Ross McIndoe]