Celebrated British photographer Richard Billingham moves to moving image with first feature Ray & Liz, and its portrait of his own unruly family is as meticulously framed and bursting with detail as his stills. We discuss memory, influences and class

Richard Billingham shot to fame in 1996 with the photobook Ray's a Laugh. An unflinching portrait of his alcoholic father, Billingham’s photographs were hailed as a highly personal document of working-class identity. Now, almost 25 years later, he's returned to the Black Country with Ray & Liz, a film about growing up as the heavy industry that once dominated the region was being decimated by Margaret Thatcher’s economic policies.

“I didn’t sit down one day and decide to make a film about my family,” explains Billingham while discussing the origins of his debut feature. “The film came from an idea I had for a gallery piece that charted a few days in my father’s life. The moments in the film where you see Ray drinking his homebrew, those are from that original concept. However, as I was shooting these scenes I decided I wanted to write a short film about my uncle, and then I wrote another one about my brother. The structure just emerged organically from there.”

These scenes of Ray slipping in and out of an alcoholic daze provide Billingham with the framework to revisit two formative moments in his life. The first, dated around 1980, shortly after Ray had been laid off from his job as a machinist, centres on the time his baby brother Jason was left in the care of his uncle Lawrence. Billingham’s family later sold this house and moved into a nearby council flat. This is where the second chapter unfolds, in which a teenage Jason is seen fending for himself in the days leading up to him being taken into care. 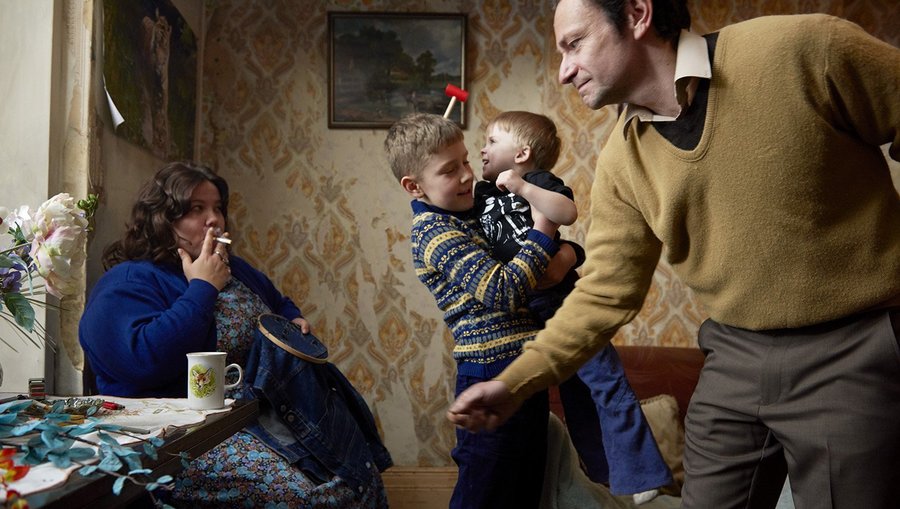 Billingham’s ability to communicate his lived experience through his mise-en-scène illustrates a rarely seen aspect of working-class life. Blending various textures, patterns and objects, he has created a deeply personal memoir that eschews melodrama in favour of the type of photographic detail he’s famous for. The result is an arresting vision of urban hardship that’s unique in its understanding of the link between household objects and memory.

“When you're a kid you look at things so intensely,” he explains. “For example, you might sit and stare at the electric fire for half an hour, or at a painting on the wall. Back then these objects felt closer and more significant, and maybe that's why they play such a large role in remembering.”

At odds with the gritty kitchen-sink realism commonly associated with depictions of life on the breadline, Billingham understands just how important the ornamentation and decoration of the home is in defining identity. “A few of these objects were items I still possessed, but most had to be sourced from charity shops,” he tells us. “It took a long time choosing the right objects because it was important to me that they looked authentic. I wanted them to resonate symbolically with the rest of the props so they’d resist any simple allegorical readings.”

Despite his fastidious attention to detail, he remains surprisingly blase about how it felt being surrounded by these mementos of the past. “I didn’t feel anything to be honest,” he breezily replies. “You’re always fighting against time when you’re filming. You’ve all these people telling you to hurry up, and to move on to the next shot. You never get a moment to reflect on what you’re working on. It’s probably not the answer you want, but my brother has seen the film. He told me afterwards that it was exactly how he remembers it. So, I must have done something right.”

There's a degree of intervention in each of these snapshots of Billingham's life that only a photographer could bring to the table. The result is a film that occupies a middle ground between fiction and documentary, setting it apart from similar autobiographical works, something Billingham was keen to achieve. “I didn’t look at other films for inspiration,” he claims when asked about his influences. “I just tried to make the film look as realistic as I could. Visually, I was inspired by Jeff Wall’s photography, especially the way he constructs his scenes. He makes them look incredibly real – almost hyperreal. There’s this one image he did called Insomnia, where a guy is photographed lying on the floor of a kitchen. If you look closely you can see all these grubby marks on the walls. If you tried to recreate these marks quickly it wouldn’t look real. It takes a lot of time and attention.”

Billingham has always denied there’s a political agenda behind his work, but the parallels between his depiction of life in the 1980s and the austerity measures of today are hard to ignore. At a time when there are very few working-class voices exerting any influence within the creative space of British film, Ray & Liz gives pause for optimism, illustrating the potential of art to offer an escape from the harsh realities of life. “I always loved drawing as a kid. I got a lot of pleasure from it. But back then in the 80s you had a lot of time on your hands. We didn’t have after-school classes and there were only three or four channels on the TV, so we had to find something to do. Today kids play computer games but back then you only had board games.”

Ray & Liz was funded in part through Kickstarter, a platform that has helped provide more opportunities for artists from underprivileged backgrounds, but Billingham believes the key to greater diversity is education. “When I came back to that tower block after school, subjects like mathematics felt abstract to me in a way that art didn’t. Applying to university was a way of escaping that estate. If I hadn’t gone to university I probably would have stayed there forever. But I never felt like I didn’t belong at university. For me it was more awkward when I went back to working in the supermarket with all the other lads from school. I’d just had my first photo exhibitions and they didn’t really get what I was doing. So, I kept it a secret.”