A year where Glastonbury sat it out, TRNSMT morphed into an unabashed lad rock endeavour, and Leeds and Reading began to suspiciously resemble Rewind, 2018 presented an opportunity for smaller festivals – those championing music from the sonic fringes – to take centre stage.

Daring Sheffield weekender No Bounds, moving into its second iteration, certainly falls into this category: a festival just as focused on celebrating the Steel City’s rich electronic music heritage as it is promoting boundary-pushing sounds from further afield. "It’s a unique premise for Sheffield, and we like to think it’s a unique event for the wider electronic community," wrote festival founder Liam O’Shea (better known as Lo Shea) in the programme’s foreword. The ambitious timetable – which includes panel debates, film screenings and production workshops alongside the music itself – certainly reinforces this assertion.

There was certainly plenty of room for error, with much of the day programme running in tandem at various venues across the city, but things proceed with a seamlessness that suggests pre-planning had been nothing short of meticulous. French DJ, producer and vocalist Coucou Chloe supplies the first eye-catching performance of the weekend, emerging onto the main stage of the sprawling Hope Works Warehouse just after midnight on the first night. Despite early moments falling victim to sound bleed from the neighbouring courtyard stage, the earth-shuddering bass of her deconstructed proto-trap anthem GS quickly sees her reclaim the sonic space. Toying between full-frontal maximalist beats and a more groove-focused, mutant take on R'n'B, her tripped-out, obfuscated vocals lend the performance a welcome sense of consistency.

Next door, it's the aptly-named Off Me Nut Records crew that prove to be the unlikely stars of the night. Bringing with them a dedicated band of glowstick-clad revellers, the local collective take over the aforementioned courtyard for an unrelenting, no-frills onslaught of rapid-fire 4x4. The bpm rarely drops below 140, with the DS1 bassline edit of Tempa T’s Next Hype sending the crowd into an impossibly raucous state when it drops towards the end of the set. Giving a genre of music as maligned as bassline a starring role is a bold move, but one that ultimately helps convey the image of No Bounds as a festival devoid of pretension. 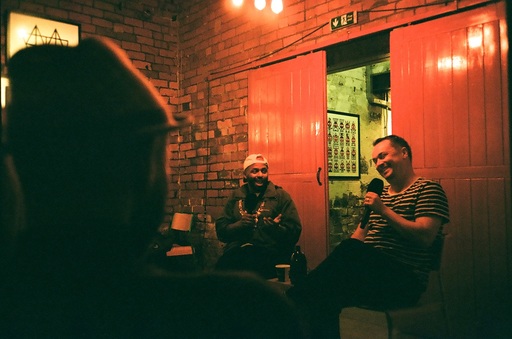 Day two begins with a flurry of thought-provoking panel debates – the most hotly-anticipated being that with Sheffield’s Trump-hating renegade mayor Magid Magid. Somali-born Magid, who migrated to the city’s Burngreave district as a child, gives a refreshingly honest account of his own musical education – which included stealing his sister’s hip-hop CDs and sneaking into former bassline mecca Niche with a fake ID aged 15.

Over at Trafalgar Warehouse, a 1930s industrial complex in the heart of the city, some of the festival’s finest (and most adventurous) moments take place. Canadian compositionist Sarah Davachi, drawing on music from her recently-released Gave In Rest LP, eases in the crowds in perhaps the gentlest way possible. Seated for the whole performance, Davachi’s impossibly nuanced dronescapes send most of the crowd into a semi-meditative state (at least two nod off altogether).

Later in the day, dub scientist Adrian Sherwood swashbuckles his way through On-U Sound classics old and new, giving the monstrous Sinai Sound System the workout it deserves. Similarly bass-oriented is DJ Kampire of the Kampala-based Nyege Nyege crew. Armed with a laptop and the most basic of Apple earphones, she delivers a refreshingly contemporary set of pan-African electronics. But it's South London sound collagist Klein who is the weekend’s standout. Invisible behind a thick layer of red smoke, a bewitching combination of eerie sounds and beguiling vocal samples soon flicker through the air before making way for the occasional ear-splitting burst of noise. "Come closer, dunno why everyone acting shook," she insists, with the crowd tentatively obliging. Uncategorisable, unhinging, but simultaneously utterly captivating, it's a performance that leaves a lasting impression.

Returning to Hope Works that night, it's difficult to shake the feeling that the bulk of the techno on offer in the main room is a little straight-edged. The High Density Energy Chamber on the other hand – a sweaty techno bunker tucked away in the corner of the venue – throws a welcome flurry of curveballs. Ifeoluwa’s playful, hardcore-centric set features an inconceivable footwork edit of the Macarena, the multi-talented Afrodeutsche dazzles with her DJ-live show hybrid, and electro revivalist Jensen Interceptor closes with seminal LFO bass throbber Freak – a fitting tribute to late Sheffield pioneer Mark Bell.

Only two years in, already No Bounds has established itself as a permanent fixture in the British festival calendar. A wildly diverse, all-encompassing line-up is one thing, but it’s the unwavering attention to detail and genuine respect for attendees that helps elevate it to a truly special event.