Jupiter Rising blossoms into its second year, proving itself an essential player in preserving, expanding and celebrating Scottish culture and arts

An environment more akin to a cult, Jupiter Rising blossoms into its second year in a mood that resonates as less of a festival, but rather more as some sort of exclusive arts retreat. Neighbouring the iconic Charles Jencks Cells of Life landform, we have the Roundtop stage – a multicoloured bell tent, the festival’s humble focal point – positioned in such a way its performances bleed into other nearby activities, with echoes lingering as the setting sun meanders over the textures of the landform. We are surprisingly gifted with lovely weather for the festival’s duration, seeing folk swimming liberally in the lake, or enjoying the expanse of the Artland’s sculpture park.

Friday night very much feels like a grunge renaissance. We begin with Glasgow’s Overwhelmed, who pull out an energetic, bass heavy set, reminiscent of Chicks on Speed, and very much in keeping with the riot grrrl resurgence. Next up is Alpha Maid, aka Leisha Thomas. A more experimental set, we find sonically-immersive grunge-informed guitar music, textured with thundery field samples and electronic reverb. Her music melds wilding ambience with traversing vocals that feel best described as sultry echoes.

Our first night comes to an end with The Vaselines, who seem to thrive in such an intimate setting. They draw an inter-generational crowd, who unsurprisingly bumble in excitement as the set nods towards those songs canonised by Nirvana’s Incesticide (Son of a Gun, Jesus Doesn’t Want Me for a Sunbeam). 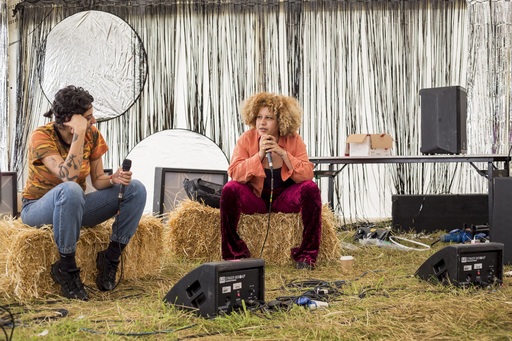 Our Saturday takes an early start with a brunch talk from Sarra Wild (OH141) and Aisha Mirza, discussing accessibility, queer and poc visibility, and Misery Party, Mirza’s sober club night project. “We’ve always just been in places [that] let us party,” Mirza explains, on the importance of a club night that ensures a safe environment for people or colour and queer folk. The talk is followed by a workshop that sees all in attendance discuss their own approaches to self-care and dealing with mental health, culminating in a highly valuable, educational talk from Wild and Mirza.

After a wander through the sculpture park with Jupiter Artland’s ORBIT Youth Council, we find ourselves at the Jencks Stage – a small stage, waterside, literally within the landform – for a performance by Ain Bailey. Bailey’s field recordings fluctuate her sound between hyperreal and natural, expected and unexpected. Traffic blurs into waves crashing ashore, while we're simultaneously centred in an underlying Kubrick-esque sonic beehive. Her impact on the audience is fascinating, as there is an urgency in their transition from standing to seated to laid down, as if her work emits some unspoken rule for how it's best enjoyed.

We move on to the lake, by which Communal Leisure and Glasgow’s Rattle Library are hosting a series of small reading and discussion groups through the day, alongside their jointly curated zine library. It's at this point that the festival’s intimacy can really be appreciated, as Manchester "genre-evading" band ILL poetically soundtrack our discussion on activism from the Roundtop stage.

It is Saturday’s headlining acts that ultimately win the festival, though. Edinburgh Leisure’s surrealist performance art verges on hilarity, as Tim Fraser’s static 'Happy Birthday' chants are lulled against Keith Farquhar staple-gunning onto a wood board. The highlight is Farquhar’s attempt to harmonise with his Guinness tinny, before he sincerely "plays" rolls upon rolls of masking tape: it really is an anything-goes performance, though surprisingly enjoyable. 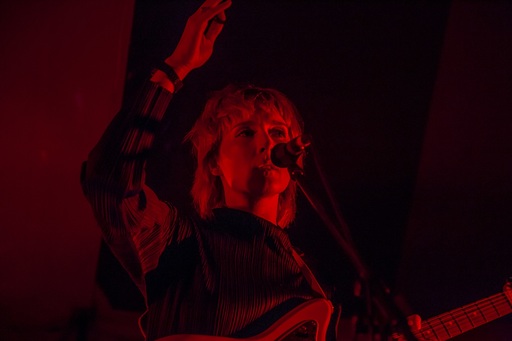 Following this, we find ourselves in the presence of Cate Le Bon, whose set is nothing short of exceptional. Exhibiting the majority of her latest record Reward, her band dazzle in indulgent jazz around her unique, beautiful, surrealist vocals. Le Bon delivers an awe-inspiring performance, its specialness heightened by the surreal intimacy of the festival; as the band hang around packing up their van post-set, Le Bon is more than willing for a quick wee chat.

Last on the Roundtop is the enigmatic, divinely energetic The Comet is Coming who perform music from their latest album Trust in the Lifeforce of the Deep Mystery. A sax heavy, high energy dance party of a set, their celestial synths and explicit political views ('shoot the prime minister'), The Comet is Coming land an excellent performance, owning control over the crowd with great ease and showmanship. We wrap up our evening at the Sarra Wild-curated OH141 stage, a small mesh-lined stage found through an opening in the woods. It's the perfect location for a final celebration of a wonderful weekend.

A weekend embedded in riot grrrl punk, experimental ambience and forward-thinking workshops; Jupiter Rising is in its essence futuristic. As it looks back to the past, learns from it; artists reimagining music, artists canonised by 90s grunge, workshops dedicated to self-help and mental wellbeing, voicing platforms for marginalized groups, specifically queer-folk and people of colour. It feels that even in its youth, this festival is an essential player in preserving, expanding and celebrating Scottish culture and arts.