SQIFF headed to cyberspace in this age of pandemic; one writer reports back on how the festival reflected our increasingly dystopian world back at us

This year has been stranger than fiction. Queerer than science fiction. And SQIFF has revelled in exactly that through its Every Utopia is a Dystopia collection. Scottish Queer International Film Festival in 2020 has been a homecoming; for many, we found our queer identities online. To find ourselves, and our queerness, on a laptop screen once again was a welcome comfort. The collection ranged from the normal to the abnormal, exploring queerness both subtly and overtly. These films are escapism – in the most necessary and queer way.

To position Jamie Crewe’s horror Ashley as science fiction makes it all the more terrifying, forcing a further confrontation with the boundaries of mind and body, as the film explores. It follows Ashley, played by Crewe, attempting to escape their troubles on a weekend away to an isolated cottage. Rather, it sees them grapple with their identity and their past, while something more sinister seemingly lurks. The internal monologue, voiced by Travis Alabanza, creates this dissonance – the self is undergoing a splitting, and it’s painful to see Ashley struggle with it on screen.

We view Ashley, as a character, with such closeness but they are ultimately out of our reach – and this creates an even deeper empathy for them. It is a film of simultaneous comfort and discomfort, and, arguably, that’s what we all need right now. Ashley is a haunting joy of a film. 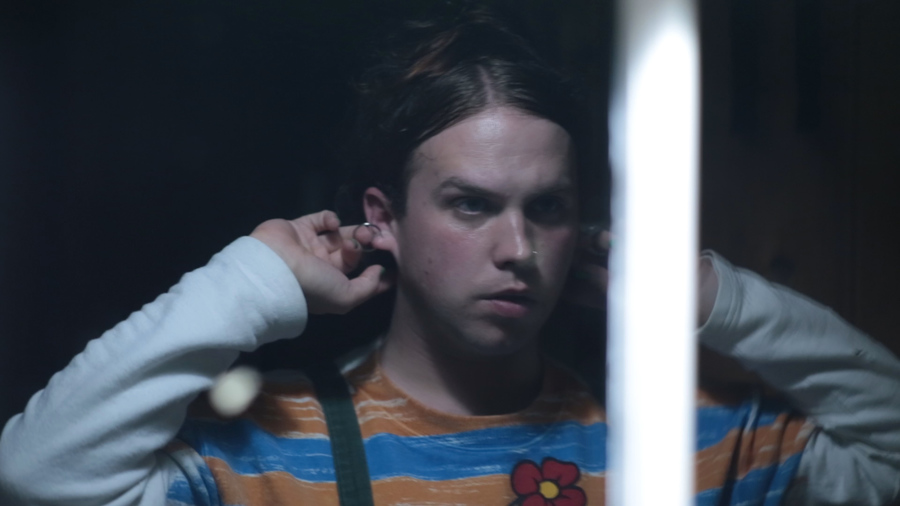 Likewise exploring gender identity are Prototypes I and II, the first two instalments of Doireann O’Malley’s recent trilogy. Set in the modernist Interbau housing development in the Hansaviertel area of Berlin, the film looks at trans identity through psychoanalysis, speculative technology and parallel realities. At times, it’s hard to follow: it doesn’t grip to any one character, it slips between German and English (sometimes even leaving us non-German speakers subtitle-less), and it sacrifices explanation for exploration. While this isn’t an easy watch, it is a watch for our times: connection at a time of disconnection. This is a film that knows what it’s doing – even if you don’t.

Certainly, there is no knowing what Flaming Ears is doing. Set in 2700, this sci-fi entanglement of three women pushes conventions. It’s hard to put your finger on what’s going on – pyromania, comic books, club nights – with lurid shots, shadowed frames, and little narrative coherence making this all the more difficult. Between rollerblades and red plastic, its aesthetic is as queer as its sex scenes, ensuring that the film draws you in visually even when lacking narrative clarity. If parties are ever a thing again, this is a film to bring up while rolling a cigarette amid a mildly pretentious conversation, casually dropping it in to impress the art school lot.

From forceful sci-fi to a gentler variety, Keyboard Fantasies: The Beverly Glenn-Copeland Story returns us to home comforts. The film takes us through Glenn-Copeland’s life and music, with a focus on the resurgence of his Keyboard Fantasies, a 1968 album which effortlessly blurs electronic and folk. The film is a kind celebration of life and art – one to save for your weekly pandemic burnout. Some of its most touching moments are scenes of the band’s live shows: Glenn-Copeland opens with a sense of closeness and intimacy to the live audience, so true us laptop viewers feel it too.

It seems science-fictional now – a packed room, un-masked, un-sanitised, un-distanced. Its existence, and the existence of Glenn-Copeland’s story, is powerful in itself, queer art transcending timely constraints: it revives itself, it travels in time. Keyboard Fantasies, finding its audience several decades after its original release, reminds us that better things are coming, no matter how far off – an essential for queer audiences now more than ever.

Time is bent yet again in SQIFF Shorts: Every Utopia is a Dystopia. The three unconnected shorts in the programme – 35, Transmission and The Fathers Project – rest on this intersection between grief and hope: both are present, existing not in opposition but in harmony. These films offer a tender look at life and death, playing out with a carefulness that each narrative is then eager to disrupt in a powerful dismantling – of time, of systems, of realities. Perhaps the collection’s finest programme, these films are personal, political and purposeful.

If every utopia is a dystopia, is every dystopia a utopia? Probably not. But there is joy even in the bleakest dystopias – and SQIFF 2020 was one of those joys. To be displaced into the realm of impossible possibilities is grounding. To know that our queerness knows no bounds is affirming. To return to science fiction, to the alien – whether outwith or within us – is a reminder that there is always more. We don’t always understand this 'more' – my sincerest apologies, Flaming Ears – but it’s always there: to guide, to comfort, and to offer hope.

Eilidh Akilade was selected from an open call for a Scotland-based QTIPOC writer to cover SQIFF for The Skinny
For more of Akilade's writing, head to twitter.com/eilidhakilade_