Bo Burnham on Eighth Grade, teens and the internet

Comedian and early YouTube celebrity Bo Burnham makes his writing and directing debut with Eighth Grade, a tender, funny teen movie; we speak to him about presenting kids realistically and what most films about the web miss

Of all filmmakers to tackle the subject of the relationship of young people to the internet as it is now, Bo Burnham would be among the most qualified. After all, these platforms are responsible for where he is now. The 28-year-old American comedian, musician and actor began his performance career in 2006 with YouTube videos of self-penned comedy songs. The full trajectory of his path since is too convoluted to divulge here, but the important thing is that he has written and directed his first feature: a wonderful film called Eighth Grade that’s had a healthy box office run stateside and has gone on to receive numerous major awards wins and nominations, including a Golden Globe nod for star Elsie Fisher, a thrilling new talent, and a Directors Guild of America Award win in the First-Time Feature category for Burnham just days after our phone conversation.

Eighth Grade follows the life and struggles of middle-schooler Kayla (Fisher) during her final week of classes before graduating to high school. Despite suffering social anxiety, she produces vlogs giving life advice for an audience of almost zero – when there are views, it’s likely they came from her possibly-too-supportive single father (Josh Hamilton). During these final days of eighth grade, she navigates a crush, a rare party invite, and the chance to hang out with a high-schooler she aspires to be like. It may sound small-scale, but the film is a personal epic that really captures the heightened confusion of this particularly awkward age range.

Burnham’s said on record that his own struggle with anxiety inspired the project’s inception, but he collaborated with Fisher constantly to make sure that the fictional diary of a teenage girl they were creating felt true to both a 13-year-old girl and, crucially, a 13-year-old girl right now. “I had never thought of a boy ever,” he says of writing the film. “Part of that was just because I didn’t want to do my own experience. I was not interested at all in transferring that to the decidedly new eighth grade experience which wasn’t mine. It being a girl fully made it so I could not project my own experience on to it, which helped a lot. I wanted to come into this experience fresh and without authority, which I didn’t want to have, because I think a lot of movies about kids feel like they come from an authoritative place. And I just wanted the focus to be the kids.” 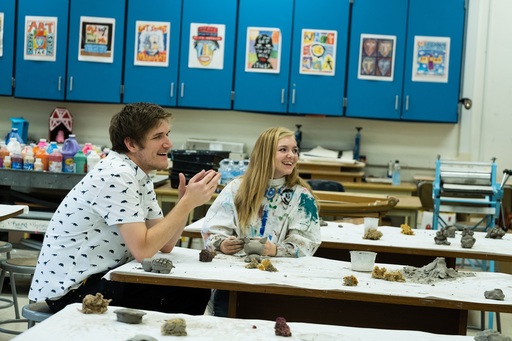 This search for authenticity extends to the young characters' dialogue, which is naturalistic and free from the kind of smart alec zingers screenwriters tend to write for their teen characters. The high school students Kayla encounters are allowed to be inarticulate, even when they may project a lot more confidence. “The problems that you have as a kid you can’t articulate yourself, so to try to fix that part of being a kid for the purpose of putting it on screen, where kids are written to be super articulate in explaining their awkward teen problems, to me it robs the kid of the interior dynamics that makes them interesting to watch.”

Burnham describes the camerawork in Eighth Grade as “very subjective” and focused on how to “evoke what Kayla is feeling right now”, but the film's dynamic aesthetic doesn’t solely concern its visual representation of its protagonist's interactions with her devices and other people. British composer Anna Meredith, whose debut studio album Varmints won the 2016 Scottish Album of the Year Award, scored the film and provides what Burnham describes as “the subconscious of the film”.

“I wanted an electronic score but I wanted something a little more human and not so aggro,” explains Burnham. “Electronic scores can be a little cold. I wanted the score to not make [Kayla’s] experiences small but make them bigger and more visceral. Anna’s music was exactly what I was hoping for and more. I wanted someone to be bold and take risks, and she’s incapable of not being bold.”

The experience of the internet shown in Eighth Grade is one we rarely get to see in cinema: that of quiet, nervous people just trying to express themselves through a means that’s easier than their daily offline lives. Burnham says: “For a lot of people, the internet is this strange, heightened, higher-stakes and lower-stakes social meeting place where you can try out your own personality in a lower-stakes situation. When I was 13, what I had was AIM, this instant messenger where you would have conversations you could never have to people face to face.

“[The internet] is a strange arena for anyone. There was this unmentioned experience of the internet which wasn’t the narcissistic losers that you see satirised all the time in media, or a super depressing story of a kid who’s severely cyber-bullied. It came to be between those two types of stories and we don’t really get to see the middle ground that most of us live in, which is, yeah, we’re on the internet and we live our lives that way. But it’s not some giant crisis, it just depends – living with it is what I was trying to visualise.” Less judgemental commentary, more honest portrayal.

We mean it as a compliment when we tell Burnham that watching Eighth Grade is like experiencing a 93-minute sustained panic attack. For people who can relate all too well to certain elements of it, the film can, in parts, play like a horror movie about ‘being online’. We wonder then what Burnham makes of the recent trend of genre movies – mostly horrors or thrillers – that are set in or around the online world, largely or sometimes entirely told through screen-based interfaces.

Pleasingly, he seems to have seen most of them. “I think it’s great,” he says. “Unfriended I love, Searching… I really liked Cam, as well. It’s really cool and I think it’s an obvious thing that makes sense. The internet’s pretty horrifying, so it makes sense to set horror movies there. It’s also very inventive in that we watch all these movies on screens. With movies like Searching and Unfriended, people actually watch those movies on their laptop; that’s what’s fun about those things. And even with my movie too, I want people to see this in the theatre but there is a sort of magic to watching a movie about a girl on her laptop while alone on a laptop. I think it’s great that people making movies like that are engaging with devices that we have as devices. It’s really smart.”