Friedrich Engels is coming home! Artist Phil Collins tells us why he's dragged a Soviet-era statue of the Communist Manifesto co-author across Europe to be permanently installed in Manchester

Berlin-based artist Phil Collins was born in Runcorn, but his outlook on politics and art was formed in Manchester. He moved to the city in the early 90s to study English and drama at Manchester University, and ended up working part-time as a cloakroom boy and pint-puller at the legendary Haçienda nightclub, where his eyes were opened to the power of pop. “I saw how pop culture could be a radical force for change,” the 46-year-old artist tells us. “Through acid house and the beginning of rave culture, it was something where you understood the propulsive nature of pop – it could literally change legal frameworks.”

Collins is speaking to us by phone from an undisclosed location in Salford, where he’s working on his latest artwork, Ceremony, which will help bring down the curtain on this year’s Manchester International Festival. The artwork centres on another man, like Collins, whose life was significantly shaped by Manchester when he moved there in his early 20s: Friedrich Engels.

The German writer and radical thinker came to the city as a 22-year-old in 1842 at the behest of his father, who felt the young Engels would find living and working in the world’s manufacturing epicentre to be a formative experience. Engels Sr. was bang on the money, although not in the way he had hoped. It’s reported that Engels Sr. thought a spell working in the management office of Weaste, the family’s cotton mill in Salford, would make his son reconsider some of his lefty opinions. It did quite the opposite.

The city and its people helped radicalised Engels further, and inspired him to write his seminal chronicle The Condition of the Working Class in England, which was first published in 1845. Three years later he would co-author The Communist Manifesto with his friend Karl Marx.

Engels is well known throughout Eastern Europe and Russia – “he’s such an icon people can draw him!” says Collins – but his legacy is less celebrated in the city that most inspired his philosophy on life. “That was part of the project,” says Collins. “More people should know that somebody changed the world from Weaste in Salford, which he oversaw for 19 years. That’s the basis of Understanding Capital, because Engels takes those findings and delivers them to Marx, basically.” 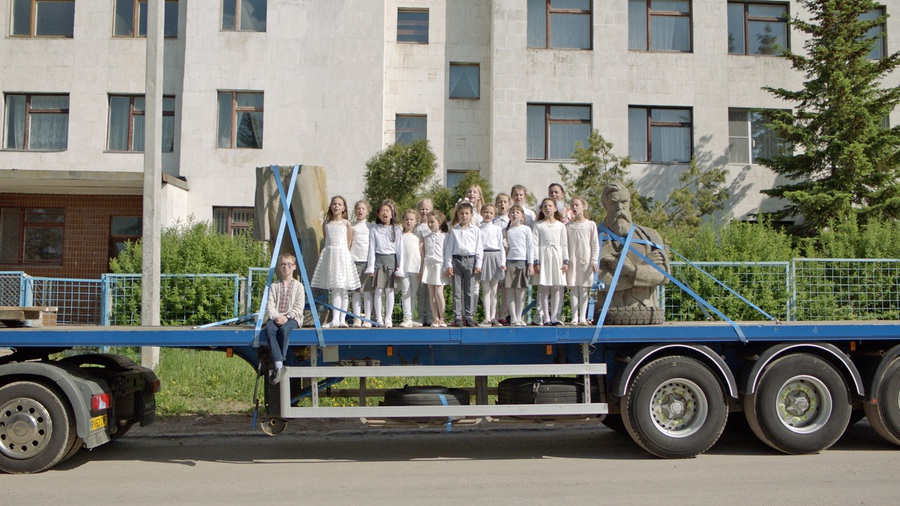 Another inspiration for the project was a short passage from Dave Haslam's book Manchester, England. “There’s a bit in Dave’s book that talks about a woman called Christine Derbyshire,” explains Collins. “In the 1990s, as part of the Central Manchester Development Cooperation, she wanted to find a statue of Engels and bring him to Manchester, but she couldn’t find one.” Collins’ pitch to MIF was to complete Derbyshire's proposal: find a Soviet-era statue of Engels, drive it across Europe via places close to Engels' heart, and hold a ceremony to welcome him back to the heart of Manchester.

Collins’ first problem in procuring a statue of Engels was that there were few monuments made of him on his own; he tends to be paired with his more celebrated co-author. “He’s pretty much always in the shadow of Marx, and that was also an inspiration for the project.” Collins’ search took him to Engels in Russia, the port city named after the author, and across Belarus, with no success, but he struck gold in the Ukraine. “There’s a decommunisation policy in place there since 2015, so you have to remove Soviet-era street names, statuary and motifs that identify with the Soviet Union, that’s by law. So I found our Engels in a tiny village near the Russian border. He was cut in half and hidden under two raffia bags.”

Once procured, Collins took the bisected statue, which will be 3.5m tall and weigh three tonnes when reassembled, on a peripatetic trip across Europe. “It felt like a lifetime,” laughs Collins. “We took the statue on a flatbed truck through Kiev and Poland, and to some of his old haunts, including Berlin and Wuppertal, where he was born, on to Calais, Dover and round Manchester. It was great.”

MIF will come to a close on 16 July with a ceremony to mark the installation of Engels in Tony Wilson Place, which will take the form of a live film scored by Mica Levi and Manchester electronic duo Demdike Stare. Gruff Rhys, meanwhile, is currently coming up with an anthem to inaugurate the statue. For Collins, who often talks of his subject in the present tense, the Engels statue will feel right at home in the city.

“The thing about Engels is that he was such a joyous figure,” says Collins. “He was a party animal, he loved a good time. He’s very Mancunian in lots of ways; he’s very much a German-born Manc.” The artist also reckons the statue will make a fine symbol for the city. “Engels embodies a lot of the great qualities of Manchester, I think. He is interested in the emancipation of the working classes, solidarity, and he’s loyal. He stood in the shadow of his best friend, Marx, throughout his life, and finishes the last two volumes of Capital from Marx’s notes but he never takes centre stage, which is something that is really admirable about him. He’s a really beautiful figure.”