From techno to chamber pop via post-punk and country, La Route du Rock's line-up ticks many boxes, but what rings loudest is the geniality of every soul encountered

Arriving at your destination by sea carries with it an inherent sense of adventure. In the present instance, the elation for what lies ahead is heightened by a rising sun that blankets the walled city of Saint-Malo with a golden glare. This former privateer stronghold on France’s north-west coast is a convenient access point from Portsmouth to La Route du Rock.

Fort de Saint-Père (a 20-minute shuttle-bus from Saint-Malo) serves as LRDR’s stunning locale for the weekend’s international line-up and those camping. Risks aplenty feature on the roster of acts, but as is the nature of any smorgasbord, some options are devoured by the masses while others are delectable only to a niche. Veterans share the bill with a carefully selected pool of rising talent, and a stage that showcases garage-rock by day can host the heaviest techno by night. It’s safe to say that the fort’s 18th-century ramparts are given a rumble.

On Thursday evening, LRDR commandeers local venue La Nouvelle Vague to present a trio of artists that display the festival’s variety in microcosm. Marlon Williams’ set is a swaggering dream, populated by soulful duets, eruptions of power, and a cover of Screamin’ Jay Hawkins’ bluesy Portrait of a Man, which utilises every morsel of Williams’ vocal ability. By contrast, Ezra Furman’s hypnotic sincerity when broaching tender subject matters with a half sung/half broken mien makes it impossible not to draw a tear for their unpasteurised display of emotion – Ordinary Life being a particular mention. The pulsating post-punk of The KVB rounds out the first night with menacing reverb and marching machinery. Call us smitten by the fest’s inaugural offerings.

LRDR’s time-slots operate under a non-overlap policy, giving the chance to witness every band on the bill. The duelling stance of the two stages allow for acts to follow on within moments of their predecessor. It’s almost possible to swivel on your heels to catch the next band. This is a fine example of LRDR’s spirit for showcasing their carefully curated selection in a way that all can be heard.

Facing Friday’s setting sun, The Limiñanas grasp the crowd with their progressive percussion and relentless stamina. Lionel and Marie Limiñana, the married pair at the band’s core, record as a duo but on stage their numbers balloon to a septet. Their black attire under an intense solar burn gives them an unwavering mystique. Extrapolating on this, at their loudest the stage is crammed with five guitars strumming furiously, and you know the bass has you under its command when your shirt shakes. From Funeral Baby onwards, the set is a god damn riot. Their cover of Gloria channels the essence of garage-rock in all of its jangled lo-fi glory. When the finale arrives, the lead couple lean in for a kiss, in potentially the most charming and climactic note of the weekend. 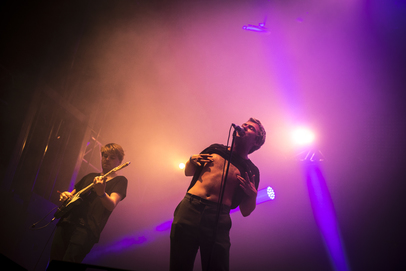 Shame follow with an instrumentally and authoritatively buzzing set. Shirtless, nipple-tweaking frontman Charlie Steen’s dual wielding mics ups the group’s anger, embodying their burning punk vitality. Josh Finerty roams the stage with his rumbling bass one moment, before leaping back across it in a blind, demented fit, kicking as he goes. Rolling on to French royalty, Étienne Daho enamours his spectators with swells of vibrant new-wave. Although seen as a controversial addition to the bill, due to his mainstream appeal opposing the festival’s alternative guise, the audience sways, sings and breathes in sync with him.

The Brian Jonestown Massacre’s late night psychedelia has a hard time melding with the depths of the cosmos and the audience. Occasional moments of glory have the power to captivate: their setlist’s inclusion of Pish suits their weary demeanour, tiny percussive bells manage to twinkle above a barrage of guitars, and A Word’s grunging finish. But ultimately, what could have been a star-sailing voyage is closer to a descent into a tar pit. Under heavy cloak of night, DJs Ellen Allien and Veronica Vasicka play a B2B set, pumping out pounding techno that oozes with a plethora of noise, obscurity and deep cuts for the vampire set. Dawn is fearful of their presence so stays well away.

Discoveries are on hand to be made. Saint-Malo hosts a beach stage, situated flush under the looming town walls, and beside a tidal swimming pool for those partial to dipping a toe. Its focus lies with flaunting fresh French talent to international patrons and yet-to-be-enlightened locals. We catch Marc Mélia’s 2001 synth odyssey floating away on the sea breeze – jealousy is real when we clock kayakers listening in from their choice watery vantage point.

Saturday sees the festival return of country gent Josh T. Pearson. The Texan’s drawling demeanour is received with a mixed response initially, but when Give It To Me Straight fires up, so do the crowd. At the set’s mid-point, Pearson says, "I traded in my cool to play these songs," and what follows are a pair of wonderfully affecting numbers that draw in and weigh on those present. Jonathan Bree and his phantasmic four float on stage clad in milky-white morph masks. An unsettling presence, given their faceless aesthetic, but it's incredibly hard to fight the lure of their ornate theatricality. The swarming sensation of their beguiling chamber pop is elevated by pre-recorded melodies and Bree’s haunting vocal. A man capable of displaying the entire emotional spectrum in one set, Ariel Pink’s aggressive mic-to-amp smashing is in polar contrast to his goosebump-inducing rendition of Baby, where the stage blossoms into a purple bloom and his ethereal tones serenade us into bliss.

Honesty and passion resonate richly from Patti Smith and we love her for it. From her admission of singing in the wrong key for Dancing Barefoot and restarting, to her statement of, "I know everything is fucked up in the world, but I still feel happy!" she addresses her mass like a sermon, preaching her views to a crowd whose mouths hang agape and sport unblinking eyes. Her punk still thrives with an unrivalled poetry, and the thundering psychedelia of Ain’t It Strange entrances both young and old. We defy anyone to tell us that her delivery of Elvis Presley's Can’t Help Falling In Love – which she dedicates to fallen friends, most recently Aretha Franklin – is not the most poignant moment of the festival. The drive Smith has for her causes and music at her age instils faith that life persists with an abundance of fruit in store.

On account of sticking out like a Celtic sore-thumb (a lobstered complexion and a rouge mane are the giveaways), we're often approached by French nationals, curious as to our origin. Hearing that we have travelled from distant plains to attend, they are touched and grateful for our presence. Many nouveau amis are to be made around these parts and this gratitude is a testament to the geniality of the locals.

Sunday brings with it a sadness, that by the night’s end all of this will be over. However, Charlotte Gainsbourg’s overwhelming clutch of muscular synth-wave, which backs her delicate vocals and empowered keys, rouses us back into fighting spirit. Flickering white neon frames adorn the stage, capturing the action with a dramatic luminance, and coupled with the band’s denim on denim stylings, blind in equal measure. Her dirty disco vibes, witnessed under still lighted skies feels like she's giving us access to the clandestine midnight underground. Deadly Valentine’s endless electronic expedition, strobing scythes of light, wailing siren and unabated thumping groove is a moment of true collective splendour for the revellers of the fest. 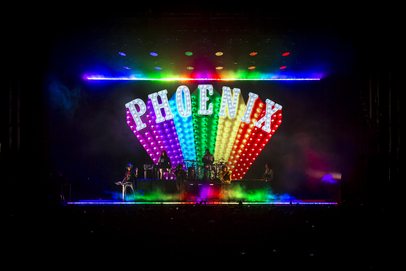 Phoenix’s poppy sensibility and boppy set burns end-to-end with a wildly infectious energy. Chromatic visuals silhouette the band as they blast out their rollicking melodies, while frontman Thomas Mars floats around the crowd, personally administering a dose a jovial bounce among us. A limitless conga line is conjured out of the jolly night air – further highlighting the fervency of the fine French folk of the fest – and snakes all the way into the pure delight of The Black Madonna. An onslaught of disco and house bangers are thrown at us for this closing shindig, and Thelma Houston’s Don’t Leave Me This Way sends us off on our merry way into the night feeling like we’ve all just been hugged. We hate to go, but if we have to leave to any tune, we’re glad it’s this.

If you want to relive your 2018 La Route du Rock, or live vicariously through us, then we've put together the below playlist for your listening pleasure.