As was to be expected, the 2018 instalment of the Eurosonic Noorderslag (ESNS) festival in The Netherlands was overwhelming, but in a good way. Over the course of the festival, 352 up-and-coming acts lit up the stages of 52 venues performing to crowds made up of the festivals’ 40,000+ visitors. A critical festival on the circuit, ESNS offers artists of all genres from all over Europe the unique opportunity to showcase their talents and be discovered by agents, promoters, festivals and fans alike in the beautiful city of Groningen.

For our visit this year, we focus on electronica from the poppier end of the spectrum to the more experimental, witnessing talented producers, future pop queens, creative noise and suitcases played in place of drumkits along the way – all in all our ESNS 2018 is a pretty fun adventure and one we'd happily go on again and again.

Here are ten of the acts we saw that are worth checking out online, or keeping an eye out for on festival bills and in venues across Europe in 2018.

FENN @ Brouwerij Martinus
Our first port of call is the dark gothic pop of Dutch producer Fenneke Schouten, aka FENN, who plays everything from straight up dance cuts to drum and bass-tinged numbers. Performing live with Frank de Boer, Schouten commands the diminutive, dimly-lit brewery space with the crowd circled round her as they sip on schooners of delicious beer, presumably from the tanks situated behind the band. It’s an exciting way to kick off our festival and gets us well and truly in the mood for our first night in Groningen. fennmusic.com

Sigrid @ Stadsschouwburg
Next up we head to Stadsschouwburg for Sigrid. Firstly though, a bit about the venue; the stunning neo-classical theatre space – which is the former home of the National Ballet and Opera – is given a makeover for Eurosonic, flipping the space round so that what is usually the stage becomes the dancefloor and a temporary stage is built over where the floor seating is. The grand balconies of the theatre act as a very classy and plush backdrop for performers this weekend.

Sigrid is our first experience of Stadsschouwburg and there’s a real zing of excitement in the air as everyone patiently awaits the arrival of the Norwegian pop princess. Fresh from being crowned the winner of the prestigious BBC Sound of 2018 award, and having just performed at tonight’s Jools Holland-hosted European Border Breakers Awards (she was one of the evening's winners) just around the corner, Sigrid is fresh and full of energy, with a strong backing band to boot.

The 21-year-old singer-songwriter is pop through and through, and the electronic bleeps and beats of her music on tracks like Strangers, really shine through. Sigrid herself is incredible to watch, chatting comfortably between songs, and flawless when in the moment; it truly feels like even bigger things are just round the corner for her. thisissigrid.com 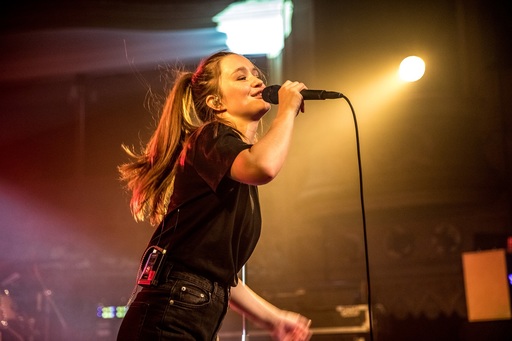 Meute @ Grand Theatre
Having been impressed by Meute before with their flash-mob appearances at 2016’s Trans Musicales festival in Rennes, we’re chuffed to finally catch them in a full live setting tonight. Techno isn’t the first thing that springs to mind when you hear the phrase 'marching band', but this German group have got it down; the bass drum sounds better than any electronic bass beat we’ve heard.

Comprised of sousaphone, saxophones, trumpets, trombone, vibraphone and drums, the sound created by the Hamburg collective is massive and the control they have with light and dark dynamics are impeccable. Better than any DJ you could hope to see at two in the morning, and the theatrics that come with it are amazing. Red military-style jackets? Check. Confetti canons? You better believe it! Dancing? Non-stop! meute.eu

Museless @ Simplon
Set to a backdrop of colourful constantly evolving visuals in the upstairs of the Simplon venue, Catalonian producer Laura Llopert who performs under the moniker Museless is the perfect start to our Thursday evening. Hidden behind a table of cables, synths, pedals, effects pads and a laptop, Llopert is a thoughtful producer and one who’s as colourful in person as her visuals; she’s wearing an awesome 90s shellsuit jacket with a line of red paint smeared across her face, and she looks cool AF. Her productions, built on beautiful melodies, delicate piano parts, driving beats and nice squelchy wubs would be equally as comfortable in a nightclub setting as they would soundtracking a sci-fi film. We're sold. museless.es

Ruby Empress @ Minerva
Ruby Empress are one of our Eurosonic highlights, providing us with one of the most ridiculous sets we see all festival, and we of course mean ridiculous in the best of ways. The Gothenburg four-piece are led by rambunctious frontman Tom Serner, who is tonight done up beautifully in red eyeshadow, a fancy white shirt tucked into leather trousers with a chunky chain belt adorning his hips. At one point someone in the crowd heckles Serner: “Why are you wearing leather pants?” His reply: “You don’t like that I wear leather pants!? Why don’t I take them off?” and instead of his pants, he rips off his shirt to reveal he words ‘Unity in Diversity’ written across his chest.

Ruby Empress work the crowd non-stop; from the tight drumming of see-through-raincoat clad Gustav Hyllstam, to Serner practically doing the splits in mid-air at points via his constant off-stage antics where he gets up close and personal with the crowd, namely a girl called Anna who is up on the stage by the end being serenaded to a cover of ELO’s Evil Woman. Live, Ruby Empress are incredibly fun and infectious camp-disco/electro-pop, and we can't help but grin when we think about them. rubyempress.com 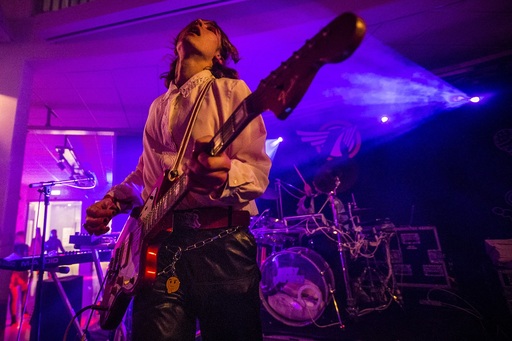 Housewives @ Vera
We rush quickly from Minerva to Vera, a venue famous for once playing host to the mighty Nirvana back in the late 80s. Other bands who have played here before becoming famous include U2, Pearl Jam, Interpol, Sonic Youth, The White Stripes, and the list goes on…

Tonight we’re here to see experimental outfit Housewives – we sadly only catch the last few songs, but what we hear has us fully in a trance; full of repetitive beats, wheezy drones, squealing sax and unintelligible vocals, the London band are oozing with energy and the whole thing is pleasingly discordant. We’re sad we couldn’t have arrived at the venue sooner in all honesty. housewivesband.bandcamp.com

Surma @ Vrijdag, Basement
The first thing you notice about the Portuguese artist Surma is how teeny-tiny she is, in contrast how much equipment she has (your eye is also drawn to the miniature plastic cactus amid her kit). At one point during her set, she’s crouched down on the floor and all you can see are her dinky socked feet under the table, but even those are hard to spot amid the reams of pedals and cables. Surma is a one woman band playing everything from guitar and bass to keys and bells to drum pads and a suitcase. Yes, you read that right, a suitcase which she plays like a drum – and it all sounds fucking magical.

Surma’s compositions are masterfully built each time from the ground up and it’s a pleasure to watch her work. On top of the music, her vocal is astonishing, like a more childlike cross between Joanna Newsom and Grimes, it works perfectly and seems effortless. surma.bandcamp.com

Ellis May @ Grand Theatre
After catching the last few Superorganism songs at Machinefabriek, and Naaz’s last song at Huize Maas, there’s a real busy feel to Friday and we’re desperate to see Ellis May, so we find ourselves standing in the drizzly rain for a solid half hour or so until they finally let us in. The Danish artist is performing in the upstairs of the Grand Theatre tonight, which is a seated auditorium above the main room. Sadly the beginning of her set is somewhat ruined by sound bleed from a very loud (and, based on the timetable, possibly over-running) Jacob Banks playing in the room below.

Ellis May is playing as part of a three-piece tonight and despite the disruptive start the band sound great, although it could’ve done with all being a little louder and perhaps in a non-seated venue. A lot of May’s music is based on really lovely dark electronic beats so it feels a bit weird to not be able to move about. May’s production is excellent and her voice is next-level; with an impressive vocal range she can one second sound like Portishead’s Beth Gibbons, the next like Austra or PJ Harvey, and even at times like Jehnny Beth of Savages. Her debut EP is due out at some point this year, so keep your eyes and ears peeled. soundcloud.com/mayellis

Lydmor @ Praedinius Gynasium
Heading to the gym isn’t the norm during a music festival, but that’s where Eurosonic takes us tonight, not for a workout, but for a bags-of-energy performance from Danish producer and singer-songwriter Jenny Rossander aka Lydmor. Arriving at the gym, we fight our way through an attentive, already-dancing crowd to see a neon UV paint-covered Lydmor centre stage surrounded by blacklight tubes.

Her electro-pop sounds huge in this room, and the more uptempo numbers would make for an excellent workout playlist at the gym, so our surroundings feel perfect. Her techno cover of Blur’s Girls and Boys has us in absolute disbelief but it’s so much fun we can’t stop smiling. Constantly up in the crowd during her set, Lydmor is a great talent with loads of potential. For now, get So Cool on your gym/running playlist and Drugs in My Pocket on for your cool down. lydmor.bandcamp.com

AV AV AV @ Grand Theatre
After another long wait to get into the Grand Theatre, we finally catch a bit of Denmark’s AV AV AV, who close out our festival with an exhilarating performance of big beats, bleeps and impressive lighting. The three producers (ELOQ, DJ E.D.D.E.H and Unkwon) have an impressive onstage rapport and effortlessly work the crowd into a frenzy with massive builds, drops and beats. There are familiar samples from the likes of Wiley thrown in for good measure too, and the crowd can’t get enough. If this trio are on a bill near you this summer, then be sure to give them your attention/time, you won’t regret it. They’d be a great end to any day if you’re desperate for a hands-in-the-air danceathon. soundcloud.com/av-av-av

Exploring Groningen
And that’s our music festival complete. We gobble down some eierbal from the vending machine on the corner and take refuge from the snow in a pizza shop round the corner before calling it a night. A multi-venue showcase festival like Eurosonic Noorderslag is not only a great way to see new and exciting talent, but it’s also a glorious way to explore a new city, and after getting lost on several occasions on our first night in Gronginen, we finally got to grips with its grid-like structure by the end of our last full day (insert sad trombone here).

If you find yourself in Groningen, our advice would definitely be to get lost on your first night, as you never know what you might find or who you might bump into (unplanned accidental culture is the best after all), but don’t wait until the last day to go on a bike tour, like us… the Groningen Tourist Information Office took us on an excellent tour of the city which culminated in a 365-step hike up the tallest tower in Groningen – Martinitoren – at twilight. It was a wonderful way to see a different side to the city and we wish we’d done it sooner.