As the full Edinburgh Fringe programme reveals itself, our comedy and theatre editor pick out some early highlights

As with every Fringe, you’ll stumble across hidden gems. For us, that means a rare quiet corner with a plug socket, perfect for frantically scratching out reviews or scouring Twitter for sleb spots and reading about shows that are brilliant but slipping under the radar, much like the mounds of flyers you'll be skidding down the Grassmarket on when the weather is inevitably inclement. But right now, we can certify these shows should be the top of your agendas.

David Callaghan: Dance like Nobody’s David Callaghan
First up, David Callaghan. At the almost unthinkably early timeslot of BEFORE MIDDAY, make sure to catch the Mat Ewins-cum-Simon Munnery of Glasgow gaggle, Chunks. Ferociously inventive. Just the Tonic (The Mash House), 1-25 Aug (not 12), 11.55am

Lucy Beaumont: Space Mam
It’s lift off for Lucy Beaumont's first show at the Fringe since she was nommed for Best Newcomer in 2014. Space Mam sees Lucy ruminate on womanhood and its many forms. Expect a show as warm and inviting as a cuppa and some buttery toast, and as weird as making a Marmite and marmalade toast sandwich with it *chef kiss*. Pleasance Courtyard (Upstairs), 31 Jul - 25 Aug (not 12), 4.45pm

Spencer Jones: The Things We Leave Behind
The maestro of absurd mumbling returns to Edinburgh. Prepare to grin ear-to-ear from Spencer Jones’ trademark brand of innocent idiocy. This may well be your last opportunity to see Jones before he’s a household name. Pleasance Courtyard (Beneath), 31 Jul - 25 Aug, 5.45pm

Fern Brady: Power and Chaos
Brash and ballsy Fern Brady is back in town. Tackling identity in all shapes and forms, it’ll be another firecracker of an hour from the Scottish stand-up. Monkey Barrel (Monkey Barrel 1), 1-25 Aug (not 12), 6pm

Moon: We Cannot Get Out
Finally, we suggest taking a punt on Moon. Their debut hour last year was a frantic, disgusting and surprisingly techy sketch show. This year, we hope their fresh style of comedy continues to win plaudits as their venue tries to kill them. Pleasance Courtyard (Pleasance Below), 31 Jul-25 Aug, 9.30pm [Polly Glynn] 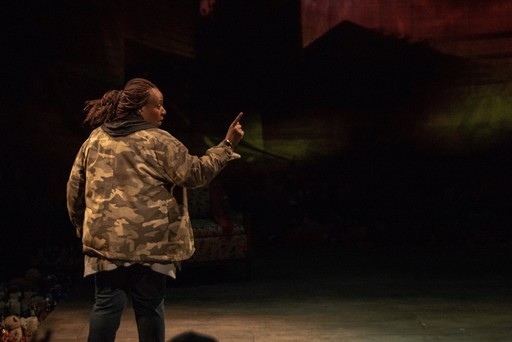 Traumboy / Traumgirl
Exploring the sex work industry from different perspectives, Traumboy is a solo-show by performer Daniel Hellman that has toured internationally, and Traumgirl is a brand new response piece created by performance artist Anna Welenc, premiering at the Fringe. Both shows explore the relationship between sex, money, shame and identity, as well as touching on themes such as gender and capitalism, using hybrid elements of music, theatre and dance. Traumgirl will be performed on odd dates, Traumboy will be performed on even dates. Summerhall (Old Lab), 31 Jul-25 Aug (not 1 & 19), 8.10pm

Solitary
An intense and thought-provoking look at the reintegration of America's most harshly treated prisoners into society, this wordless piece of physical theatre examines the impact of solitary confinement on one man using ensemble, LeCoq-based techniques and classically trained musicians. Assembly Rooms (Powder Room), 1-24 Aug (not 12) 9.35pm

Narcolepsy
Chris Goode's new solo show uses the 1991 film My Own Private Idaho, and the premature death of its star, River Phoenix, as the focal point for this piece about coming of age and coming out as a cis-queer man in the mid 90s. Summerhall (Red Lecture Theatre), 3-26 Aug (not 12 or 19), 1pm

Until the Flood
On August 9, 2014 a police officer shot and killed Michael Brown, an African American teenager in Ferguson, Missouri. Darren Wilson’s shot ignited weeks of social unrest, propelled by the activist movement known as Black Lives Matter. Based on interviews with dozens of people who were shaken by the shooting and its aftermath, Dael Orlandersmith has created eight characters who embody a community in shock in the aftermath of an event that forced us to face America's dark history. Traverse Theatre (Traverse 2), 1-25 Aug (not 5, 12 or 19), times vary

Cat Hepburn: #GIRLHOOD
Cat Hepburn, a fixture on the Scottish Spoken Word scene, debuts the stage adaption of her poetry collection #GIRLHOOD this year. The show assesses the pressures that young women face in what promises to be a hilarious, touching and authentic show – the collection was described in this magazine as 'the lovechild of slam poetry and the snatched rant over coffee or in the loo'. Gilded Balloon (Rose Theatre), 31 Jul - 25 Aug (not 12, 19), 4.45pm [Eliza Gearty]