Matt Palmer's debut film Calibre, a sinewy thriller set in the Highlands, is soon to make its world premiere at Edinburgh International Film Festival. We talk to him about channeling 1970s genre films and casting Jack Lowden before Hollywood comes calling

Nothing good ever came from taking a walk in the woods – not in the history of the movies at least. From the campers of Friday the 13th to the film students of The Blair Witch Project, a stroll through the pines is just asking for trouble. This is something Vaughn (Jack Lowden) and Marcus (Martin McCann) learn the hard way in Calibre, a sparse, slow-burn thriller set over a weekend hunting trip in the Scottish Highlands.

Written and directed by Matt Palmer, Calibre belongs to a rich lineage of films concerning city slickers venturing into the wilds for a relaxing getaway, only to find violence and death. John Boorman’s Deliverance is the obvious touchstone, and like that 1972 film, Palmer's picture utilises the wild, open landscape to menacing effect.

We meet Palmer to discuss Calibre in the Traverse Theatre bar, with the incongruous sounds of children's laughter in the air as we appear to be discussing this bruising horror in the middle of a school trip to the theatre. Above the din, the Kidderminster-born, Edinburgh-based filmmaker describes the idea for Calibre coming to him like “a bolt of lightning.”

“I was sitting on the sofa one night with my eyes closed, almost half asleep,” he recalls, “and I just saw this image in my mind.” What he describes seeing is the central image of the film, and it's very much the fulcrum incident that turns this weekend of male bonding into a verdant, mud-speckled nightmare. Suffice it to say, it’s too spoilerific to reveal here. “From there, I very carefully built the film around that image,” he explains.

Where does he think the image came from? “I saw a Peter Strickland interview at the Edinburgh Film Festival a few years ago, and he was on stage talking about Berberian Sound Studio and he said, ‘With the good ideas, it feels like they’re sent down mysteriously out of the sky,’ and it really was like that. I’d sat around trying to think about possible stories and rationally come up with feature ideas, but this one it was literally channeled into me; it just landed in my brain.”

The image concerned two men hunting in a woodland clearing, so whichever movie god zapped this scene into Palmer’s consciousness, it meant venturing out of the city. The Scottish Highlands seemed an obvious choice, and he had the sense that the setting would add to his film’s existential dread. “It’s just the isolation you get up there,” he says. “I think in some areas of the Highlands there’s sometimes three police for three villages in a 50 mile circumference. And that opens up the possibility of stuff happening that just could not happen in the city.”

The rural setting also appealed because it would plunge the filmmaker into the unknown. “That was what was quite exciting to me, the idea of going up and getting a real sense of those kinds of isolated places. The world of the city is the world that’s around me, so it’s not very exciting to me, whereas out in the wild it’s much more unknown. It had possibilities.”

Palmer may be making his feature debut, but he’s well-known in the Scottish film community. Many local film fans will know him as the programmer behind Psychotronic Cinema, the late, great cult movie night at Filmhouse and GFT, and the much-loved All Night Horror Madness, the annual horror marathons he holds at the Cameo. It goes without saying, then, that he knows his genre movies, and this means he’s also well aware of the cliches he wanted to avoid while making Calibre. “I love those [man-versus-nature] films like Deliverance,” says Palmer. “But there’s a sense in those films that the odds and the morality is stacked heavily in favour of the city people, which always felt counter-intuitive to me, because they’re the disruptive force, going in and causing trouble. And so as I started writing the script, I had the sense that it was an opportunity to sort of do some revision of that dynamic.” 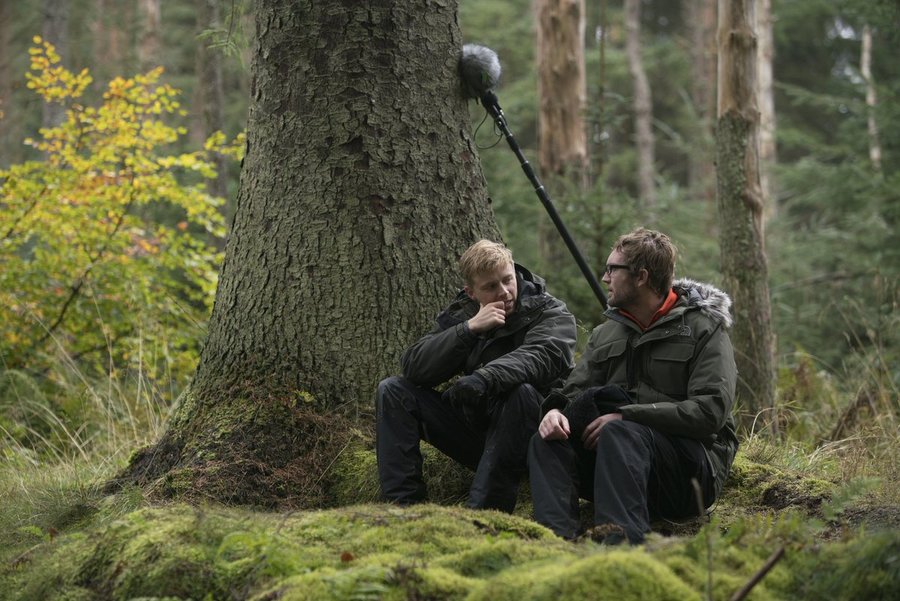 Jack Lowden and Matt Palmer on the set of Calibre

Palmer’s film doesn’t just share thematic DNA with Deliverance. Calibre’s atmosphere, lived-in look and classical film grammer – all slow dissolves and crisp widescreen images – makes it feel like it could have been plucked from the same era of filmmaking, an era where horror films seemed less enthralled to rigid genre conventions. Palmer agrees that his film’s aesthetic and pacing is closer to a 70s movie.

“In the last decade or so, something has happened where genre movies have become kind of Genre Movies in capital letters, so you expect to go and you expect massive bloodshed and cars flying off cliffs and nuns having their heads chopped off, or whatever it is,” he explains. “Those kinds of movies are a lot of fun, but it seems like the kind of genre movies that existed in the 70s, there’s not so much space for them anymore.

“Like Deliverance, say; it’s a genre movie but it’s also a drama and it’s also about something. Those were the kind of films that influenced me.” He also cites Ted Kotcheff’s Ozploitation masterpiece Wake In Fright and Walter Hill’s Southern Comfort, in which some National Guardsmen get on the wrong side of backwater bayou trappers. “Those films were intense and quite extreme in some ways,” says Palmer, “but there’s enough breathing space for the audience to be thinking while the film is unfolding, as opposed to just an insane acceleration of pace.”

Capturing this very particular 70s look was talented Romanian cinematographer Márk Györi, who throws up another Peter Strickland-EIFF connection. “I think I’d either just finished the first draft of Calibre, or I was just about to write it, when I went to see Katalin Varga, Peter Strickland’s first film, at Edinburgh Film Festival,” recalls Palmer. “I was looking at the screen and I was just thinking, ‘this is exactly what I’ve been seeing in my head’. It was ridiculous, it’s all set in Transylvania, shot on 16mm, and I was like, ‘this is exactly how I want the film to look’.”

A few years later Palmer made his first short film The Gas Man, and on a whim asked Györi, director of photography on Katalin Varga, to shoot it. Much to Palmer’s surprise, the Romanian said yes (“I think he got paid £100 for five days”) and they’ve been sympatico ever since. “It was like we just had the same brain,” he says.

Palmer’s real coup, he says, was casting the on-the-rise Scottish actor Jack Lowden – who’s fresh from playing Tom Hardy’s wingman in Dunkirk – as his likable lead character, Vaughn. Lowden has become something of an EIFF stalwart. He was the star of the festival’s 2016 opening film Tommy’s Honour, a solid but dour golfing drama, and in last year’s closing film England is Mine he played a young Morrissey. Calibre is an improvement on both those films, and a much meatier role for Lowden, but Palmer admits he’s been lucky to get his leading man.

“It was literally the last moment we could possibly get Jack at this independent film level before he wasn’t going to be castable anymore,” says Palmer. “My producer warned me when I first met Jack not to call the part ‘the everyman character’. He was like ‘Jack’s going to be a movie star, he’s not an everyman’. But when I sat down with Jack, the first thing he said was, ‘So this is the everyman role.’ Jack got Vaughn instantly.” 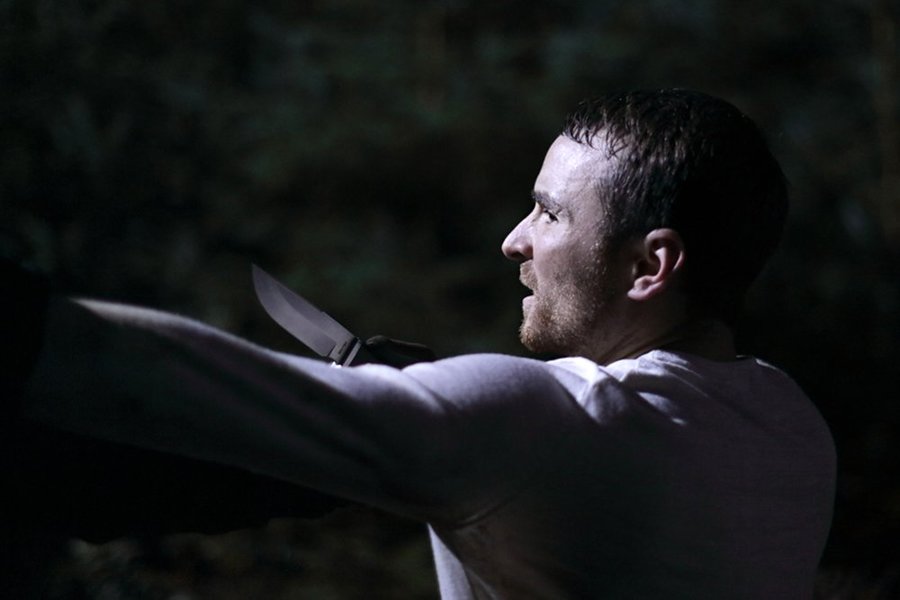 Lowden certainly impresses, but we reckon the real find is Martin McCann, the actor who plays the flinty Marcus, Vaughn's more morally complex best friend. McCann’s performance came as much of a surprise to Palmer as anyone. “I think Robert Altman said, ‘I’ve never read a script that’s in 3D’. You can write and tweak all you like, it’s only when the actors come on and inhabit those characters that it fully takes shape,” says Palmer. McCann’s casting saw the film take on a shape that Palmer hadn’t quite envisioned on the page.

“Originally I’d imagined the Marcus character as possibly English, possibly upper class, and definitely taller than Vaughn, physically imposing, and chiseled and classically dashing. But Martin is shorter than Jack, he’s not English, he’s Irish, but his audition tape came in and within the space of two minutes my entire perception of that character changed. I'd got it wrong, this is Marcus. He’s taken the essence of what I had on the page, but Martin was so inside the character and the character felt so vivid and real in his audition tape, I don’t care about any of those details. It’s him.” Together, Lowden and McCann make a formidable team. “When those two were confirmed, my fears of making a dreadful movie switched to, ‘Oh my god, the potential with these two is enormous’. So suddenly the project just lifted.”

Before we wish Palmer well with the film’s world premiere at Edinburgh International Film Festival, we ask what he’d pair Calibre with if he’d programmed it in a slot on All Night Horror Madness. The question stumps him at first. “Normally I tend to try to programme for variety as opposed to theme, because the thing is, the obvious answer would be Wake in Fright and Deliverance, in a sort of survival triple bill, but whether anyone would want to sit through those three movies in a row, I don’t know.”

The answer then comes to him: Pieces, the outrageous 1983 horror-comedy that he’s programmed more than any other film – so much so that Palmer is undoubtedly responsible for this obscure little horror’s cult status among Scottish movie fans. Yes, he says, his mind is set: “I’ll take any excuse to show Pieces, basically.”

Calibre has its world premiere at Edinburgh International Film Festival, screening 22, 23 and 30 Jun – more info and tickets here – and streams on Netflix from 29 Jun