Mark Cousins on The Eyes of Orson Welles

Mark Cousins' latest film explores the life and work of Orson Welles through the huge archive of drawings the Citizen Kane director made across his life. Cousins tells us how studying these sketches brought him closer to his filmmaking hero

Picture the scene. Belfast, 1973, and a nervy eight-year-old boy is sitting crossed legged in front of the TV watching a black and white thriller. A feverish noir, it concerns a straight-laced cop from Mexico who goes toe-to-toe with his corpulent US counterpart who’s running a corrupt border town. Full of bold lighting and baroque camera moves, not to mention the greatest opening shot in film history, this pint-sized cinephile’s mind was blown.

That kid was filmmaker Mark Cousins, and the movie that so transfixed him was Orson Welles’ 1958 noir Touch of Evil. “When you’re eight or nine, you can’t really understand that film,” says Cousins when we sit down to chat at a bar near his flat in Edinburgh, the city that's been his home for three decades. “When you’re 50 you can’t fully understand it, either. It’s definitely about sexuallity, it’s definitely about racism, but back then I knew it was something so intense, for me, so visceral, so like a tractor beam. It was the first time that I realised films could have a texture. David Lynch talks about the ‘texture of film’, so I felt that.”

The reason we’re discussing this Orson Welles classic is that Cousins has just made a wonderful new film about the legendary director, called The Eyes of Orson Welles. Fresh from going down a storm at Cannes, it’s due to have its UK premiere at Edinburgh International Film Festival this month.

As the title suggests, the Irish filmmaker’s angle into discussing this giant of cinema is through the way Welles looked at the world, specifically through the drawings and paintings he made since he was a boy. Cousins had encountered a few of these sketches over the years, on the internet or in Welles biographies, but a chance meeting with Beatrice Welles, the Citizen Kane director’s youngest daughter, at Traverse City Film Festival, lead him down a rabbit hole.

“I’d no idea that [Welles’ archive of sketches] was so huge,” says Cousins. “I would estimate there’s almost a thousand. I’m the first person, I think, to look at all of the drawings anywhere in the world, so the scale of it was completely new to me.”

Beatrice Welles, it turned out, had been a fan of Cousins’ previous films, which include his rapturous love letter to his hometown I Am Belfast and his epic study of cinema’s history The Story of Film. Over a few cocktails, she suggested he make a film about her father. After a moment’s trepidation (“the world doesn’t need another Orson Welles film,” was his initial thought) Cousins started to warm to the idea. Within ten minutes, he says, the shape of the film had begun to form in his mind.

“I’d been toying with the idea of a chess piece structure, or a kind of archetypal structure for some time,” Cousins explains. “I’d been looking for a subject whose life you could look at over and over again, like Groundhog Day.” The structure he came up with was in five parts. “I didn’t want to start at the beginning and go to the end, but I wanted to look at almost the best of a person first, in this case Welles and his social justice, wholly admirable and brilliant, and then rewind the clock and look at him again in love, and then rewind the clock again and look at his fascination with Fascism, and rewind the clock again and look at his sense of humour and irony.”

The Eyes of Orson Welles’ structure may be rigid, but the filmmaking is anything but. Playful ideas and imaginative connections abound as Cousins uses the director’s sketches to explore the man and his work. Seeing the doodles Welles made for his adaptation of Franz Kafka’s The Trial, his expressive set designs in charcoal for Macbeth or his charming character studies for his unfinished Don Quixote project juxtaposed next to scenes from the finished films is akin to going to an exhibition of a great master painter where the curators have hung the pencil sketches or watercolour studies next to the famous masterworks.

‘When you get into these Orson Welles drawings, you can see him thinking, thinking visually’ - Mark Cousins

“And I prefer the sketches,” says Cousins of this analogy. “I always have. If you go through the Prado or the Louvre, they’re full of these perfectly finished canvases. It’s far more exciting to see the unfinished ones. If you can see the paint movement, the movement of hand, then you feel closer to the artist. It’s like ripping the lid off of those paintings and looking into the unconscious mind. When you get into these Orson Welles drawings, you can see him thinking, thinking visually.”

“This is a drinker’s image,” Cousins confirms. “There’s a big drinker’s nose there, as you can see, and the sort of slightly cartoony eyes. He has a big smile, and yet look at the grey background, there’s none of the colours you’d expect in a christmas card. Where’s the green and red?” This quick doodle, knocked off in a few minutes, works as a kind of peephole into Welles’ unconscious, says Cousins. “There’s something a bit autobiographical here. It is Santa, but it’s also a bit of King Lear, it’s a lot of stuff. So surprise, surprise, the artworks have a Freudian quality about them. They’re contradictory, they’re all the things the man himself was.”

Cousins’ film’s form adds to this intimacy. In his distinct Irish brogue, the film opens like a personal correspondence to his hero – “Dear Orson, look where we are…”. Cousins’ almost whispered voiceover makes it feel like we’re eavesdropping on a private conversation. This vocative mode of address runs throughout Cousins’ work. It’s there in his whimsical travelogue What Is This Film Called Love?, in which he wanders around Mexico City chatting to a portrait of Sergei Eisenstein, or in his monthly film column in Sight & Sound, which often takes the form of open letters to actors or filmmakers.

“I’m slightly suspicious of the kind of middle-aged white male view of things where it’s objective, it’s professorial, it’s ‘I’m telling the history of Orson Welles’, ‘Orson Welles did this’, ‘He did that’,” says Cousins. “There’s something in the affirmative of that that’s almost too macho.” Cousins more personal approach frees him up to explore Welles from new angles. “It becomes more subjective, in a good way, and allows me to touch on some things about Orson Welles that not many other people have. It makes you use more emotional language too frankly; it makes you more playful, you can make little jokes, you can tease a bit. And that style of writing is the kind of writing that comes more naturally to me.” 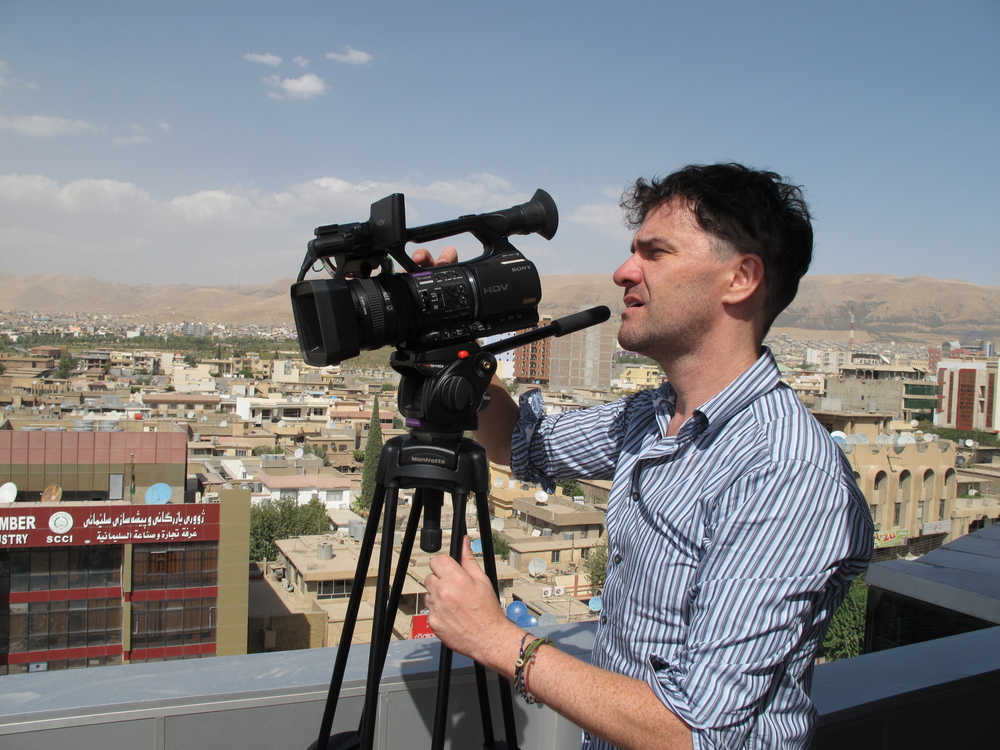 In other words, Cousins is a filmmaker who wears his heart on his sleeve. He wears the names of his heroes there too – in the form of tattoos. On this balmy May morning he’s wearing a tank top, so many of these heroes are visible on his arm: we can see Soviet master of montage Sergei Eisenstein, the great impressionist painter Paul Cézanne, architectural genius Le Corbusier, Iranian poet and filmmaker Forough Farrokhzad. Welles is there too, in the form of his swirling signature on Cousins’ right bicep.

What’s the criteria to make it on to his arm, we ask. “Well, they have to be dead, first of all,” he laughs. “If they’re dead, they’re less likely to turn into Trump supporters or something like that. But they’re people who, in some simple way, have astonished me. And beyond that, these people tend to be quite wild in some way. Or innovative. And in the case of Welles, he was certainly both.”

If you think you can’t get any more intimate than this most permanent of inky tributes, Cousins has another surprise inside his satchel. “I bought them online,” he says sheepishly, pulling out a huge pair of Welles’ old boots. “This was one of the last pairs he had commissioned. He’s no longer distant.” Cousins reaches in to the black leather and pulls out something white and plastic. “Look,” he says proudly, “he can’t be distant when I’ve got his orthotic.”

The Eyes of Orson Welles has its UK premiere at Edinburgh International Film Festival, screening 24&25 Jun, before being released across the UK 17 Aug by Dogwoof