Thumpasaurus
We were fortunate enough to catch the LA-based funky five-piece last August at Underbelly Cowgate so are delighted to see they’re back for another run of late night weekend parties throughout this year’s festival. Drawing influences from the likes of Talking Heads, Jimi Hendrix and Black Flag, and sounding like a rude, high-powered Flight of the Conchords with lyrics like “I’m too funky for my motherfuckin’ grandma”, we’ll no doubt be back again and you should go too if you want a guaranteed good time.
Underbelly Cowgate (White Belly), 3-5, 10-12, 17-19, 24-26 Aug, 11.59pm, £10

Autobiography
This is a bit of an odd one to include in music as it’s part of EIF’s Dance programme, but what do people dance to? That’s right – music. Our interest was piqued when we discovered that the original music for Autobiography is by experimental electronic musician Jlin. Collaborating with scientists from the Wellcome Trust to determine what shape Wayne McGregor’s trailblazing choreography will take each night, each performance of Autobiography will be unique. Combined with immersive lighting and Jlin’s body-shaking electronic beats, this is going to be a one-of-a-kind experience.
Festival Theatre, 11-13 Aug, 7.30pm, £14-35

Crow Hill
To say we’re intrigued by Neil Pennycook’s latest project under his Meursault moniker would be an understatement; a series of urban horror story vignettes set in the fictitious Scottish town of the same name, Crow Hill comprises of a studio album, feature film and graphic novel. 'What!?' we hear you cry! What’s more, for the live show Meursault will perform the album in its entirety accompanied by dancers, projections and actors. A unique show not to be missed this August.
Summerhall (Dissection Room), 15-16 Aug, 11pm, £14

Anno
Anna Meredith has been an unbelievably busy bee of late with multiple projects all seeming to come to a head this month. Anno is just one of these, with six performances of her brand new record taking place over the course of two days. It's a contemporary reworking of Vivaldi’s Four Seasons with electronics and 360 degree visual arts. Throughout the 60 minute run-time, you’ll be fully immersed in a year-long journey through the seasons via the power of music and art courtesy of Meredith, her sister Eleanor and the Scottish Ensemble.
Pleasance at EICC, 17-18 Aug, various times, £14-16.50

St. VincentWith five solo records, a collaborative album with Talking Heads’ David Byrne, her own signature guitar design and several other amazing things we don’t have room to list here, Annie Clark is one lady we can’t wait to see this August on a rare trip to Scotland as part of her I Am a Lot Like You! tour at the Edinburgh International Festival. After causing a bit of controversy late last year due to touring 2017’s Masseduction on her own, God forbid, Clark is always one to surprise in a live setting so we’re super excited to see what she’s got in store for her Edinburgh fans.
Playhouse, 26 Aug, 8pm, £25-40

White Feminist
From US performer Lee Minora, White Feminist is a one-woman show that explores privilege, class and the danger of white womens tears. This new piece of theatre holds a mirror up to the state of US feminism and asks, “Are you one of the good ones?” One for people wanting to laugh and change the world for the better.
Tolbooth Market (Room 6), 4-25 Aug (not 13), 9.45pm, Free

Director’s Cut
Fancy something that’s a real horror show? Kill the Beast’s Director’s Cut is a ghost story-comedy staged on a 70s B-Movie set, where a terrible presence is wreaking havoc on the shoot but the director is determined that the show will go on, whatever the cost to the cast and crew.
Pleasance Courtyard (Pleasance Two), 21-27 Aug, 6.30pm, £9-12.50

Hot Brown Honey
Cabaret with sass, style and politics, Hot Brown Honey are back in Edinburgh with their signature genre-defying blend of music, dance, and empowerment. The people who produced this also produce Briefs, don’t ya know.
Gilded Balloon Teviot (Debating Hall), 3-27 Aug (not 8, 15, 23), 7.30pm, £12.50-16.50

Mark Thomas – Check Up: Our NHS at 70
Our NHS is 70, but how healthy is it? Mark Thomas, with his masterful storytelling and trademark wit, looks at this brilliant but underfunded institution and wonders what will it look like when it is 100?
Traverse Theatre, 4-26 Aug (not 6, 13, 20), various times, £9-21.50

Eleanor Morton: Great Title, Glamorous Photo
Taking a look through the lens towards her glamorous photo, Eleanor Morton is examining the expectations that come with being a female performer. It’ll be delivered with imaginative surrealism and some characterful whimsy, and from a comedian with original things to say.
The Stand Comedy Club 4, 1-25 Aug (not 2, 13 & 20), 12.05pm, £7-9

Foxdog Studios: Robot Chef
Lloyd Henning and Pete Sutton return to reinvent our ideas of IT consultancy. Foxdog Studios' shows are unique in the joyousness with which they bring interactive technology to the Fringe. This year they join Heroes' roster at Boteco, where amid the servings of Brazilian cuisine the duo are setting a Robot Chef on the loose.
Heroes, Boteco (Basement), 2-26 Aug (not 9), 1.20pm, £5/PWYW

Henry Paker: Man Alive
In his previous show, Guilty, Henry Paker played a Gaviscon-swilling illustrator caught up in a noir-style thriller. He seems no less ill-at-ease now, hiding out in the 'Travelodge' that is Banshee Labyrinth for a show not listed in the Fringe print programme. Man Alive is set to be both a dark night of the soul and a story told over an open can of John West's tinned tuna.
PBH, Banshee Labyrinth (Chamber Room), 4-26 Aug (not 6, 13 & 20), 5.10pm, Free

Rob Auton: The Talk Show
Poet and comedian Rob Auton has something of Daniel Kitson's versatility, and he comes recommended by Kitson himself. Not one to skim the surface, he dives deep into single topics: past shows include meditations on hair, sleep, water, faces, the sky and the colour yellow. His latest offering is about talking, or to paraphrase the often paraphrased Raymond Carver title: what we talk about when we talk about talking.
Just the Tonic, The Caves (Fancy Room), 2-26 Aug (not 13), 6.10pm, £5/PWYW

Ashley Storrie: Adulting
Now is the time to see Ashley Storrie if later you want to claim, with any dignity, that you saw her before she became a household name. Her profile is certainly on the ascent, with a little help from Margaret Atwood (the author shared Storrie’s video tribute to – and Scottish version of – A Handmaid's Tale). More importantly, Storrie is also on the ascent as a live performer: she continually gets better and better. After a powerful debut in 2017, this time she's considering adulthood, or at least how we all pretend we're grown up.
Laughing Horse, The Counting House (Ballroom), 2-26 Aug, 8pm, Free

Shilpa Gupta: For, in your tongue I cannot hide
For, in your tongue I cannot hide brings together recordings of imprisoned poets, making a poignant reinstatement of the voices of censored artists. There will be frequent performances in the Burns monument, including poets who will write to other poets still in prison.
The Fire Station at Edinburgh College of Art, until 26 Aug, 10am-6pm, free

Ruth Ewan: Sympathetic Magick
For the young at heart, Ruth Ewan is working with magicians to consider the politics of magic and potential to change the world. Ewan has teamed up with the socialist magician Ian Saville, who brings Karl Marx to life in his shows.
Various venues and times, until 26 Aug, free

Palm House
Last year, Bobby Niven built the Palm House structure as part of the Commissions Programme and it will be open again through this month, in response to the site of a community garden built in the nineteenth century by the social theorist Patrick Geddes. Every Friday through August, there will be an open mud oven afternoon from 2-5pm.
Johnstone Terrace Wildlife Garden, 3, 10, 17, 24 and 26 Aug, 2-5pm, free

Hemispheric Phases
Hemispheric Places is the culmination of a six-month residency period and combines the work of Scotland-based sculptors Birthe Jorgensen and Scott Roger with Argentina-based Santiago Poggio. They’ve all made extensive and productive use of ESW’s world-class facilities to make ambitious new bodies of work.
Edinburgh Sculpture Workshop, until 25 Aug, 11am-5pm, free 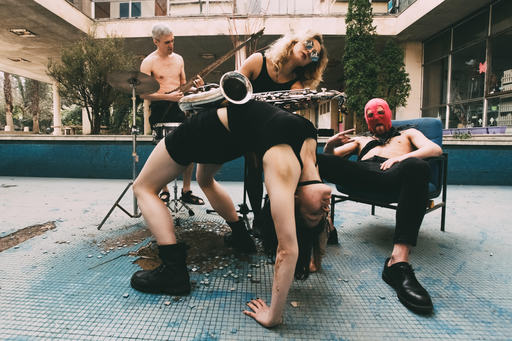 Pussy Riot, appearing at the Edinburgh Fringe and Book Festival this year.

Adam Kay
Kay’s diaries as a junior doctor gave hilarious insight into the NHS; he brought the human element to a national treasure, all the more stark when he leaves humour behind to show the cracks in the service and strain for those working in it. A brilliant book, and sure to be an equally brilliant event.
Spark Theatre on George Street, 16 Aug, 7.15pm, £10-12

Pussy Riot's Maria Alyokhina with Yanis Varoufakis
Pussy Riot fight for free speech in Vladimir Putin’s Russia, irrespective of the personal risk. Their balaclava-clad performances are seen the world over, their name synonymous with protest. Alyokhina will join Greek economist Varoufakis to discuss her life and work on the frontline of dissent against the establishment.
Baillie Gifford Main Theatre, Charlotte Square, 18 Aug, 1.30pm, £10-12

Salena Godden & Molly Naylor
The Book Festival is celebrating spoken word in a dedicated strand and two of the finest voices in the scene are putting on an event to remember. Godden and Naylor’s work is sharp, witty, lyrical – hang on their every precise and powerful word. New to spoken word? You’ll find no finer welcome.
Spiegeltent, Charlotte Square, 18 Aug, 6.45pm, £10-12

The Last Poets
The godfathers of hip-hop. They’ve stormed the Book Festival before and they’re heading back to Charlotte Square Gardens to do it all over again with their first album in 20 years, Understand What Black Is, bringing author Christine Otten along for the ride – hop in with them.
Baillie Gifford Main Theatre, Charlotte Square, 23 Aug, 8.30pm, £10-12

Akala
MOBO award-winning hip-hop artist, poet, political commentator – Akala is a vital voice in modern Britain. In Natives, he holds a mirror to the country around us, navigating the social, political and historical context that brought us here. A thought-provoking, powerful speaker – a real must-see.
Baillie Gifford Main Theatre, Charlotte Square, 24 Aug, 8.30pm, £10-12