As Edinburgh International Book Festival returns in hybrid form for 2021, The Skinny team have been diving into some of the programme highlights – here's our recap of week one

Caleb Femi: Poet of the People

Tice Cin opens the event with a beautiful introduction to Caleb Femi and his debut poetry collection, Poor. A work of poetry and photography, Poor is concrete surrealism and – as wonderfully described by Cin – "looks like a North Peckham estate."

Femi is insightful, humourous, and cuts to the core of conversation, whether it falls to class issues, death, religion, or parties. Much of the discussion centres around the complexities of working class experiences and the joy that can be found at their core. "Facelessness of conversations that surround working class-ness, there’s a violence to it," Femi says, "because that reductiveness is erasing the nuances of the people and drains that humanity." Poor opposes this one-sided conversation, bringing to the fore a multitude of working class perspectives through poetry and photography.

At the heart of the event are not only the folktales and architecture from the North Peckham estate from where he grew up, but also Femi’s intuitive love of stories. It’s this passion for communicating stories and art, in all its forms, that drives the discussion between Cin and Femi. (Beth Cochrane)

‘Modern Families, Baby’ – sponsored by The Skinny – sees powerhouse author Torrey Peters beaming in from Brooklyn in conversation with Extra Teeth co-founder Heather Parry. Detransition, Baby felt less a book of ‘what if’ but more ‘why not’, suggests Parry – why not centre trans lives, why not propose a method of motherhood that isn’t yours? Peters was influenced by Toni Morrison, she notes, who centred the black experience and didn’t assume no one else would care – her story, too, could be universal.

From her work being in conversation with Ferrante, Cusk and Offill, and how the trajectory transition mirrors much of the trajectory of divorce, Peters touches on how it was to speak back to these authors who, in a lot of ways, shaped how she saw her 30s. From shaking off and playing with expectations of trans writers and genre itself, to subversion, and finding audiences, it’s a brilliant pairing that makes you feel like you’d read anything Peters pens.

What’s next is a ‘queer financial thriller’ – words you don’t expect to see together, laughs Peters – but all the more to look forward to after an excellent event. (Heather McDaid)

Julian Aguon has witnessed first-hand the impact of globalisation and colonialism on the island of Guam; The Properties of Perpetual Lights is a memoir-meets-manifesto exploring much of this. Nina Mingya Powles, winner of the inaugural Nan Shepherd Prize for Nature Writing, travels the natural world in Small Bodies of Water.

"The personal is political," explains Aguon, diving straight into the event's lead topic on their intersections. “Writing about the landscape is an inherently political thing to choose to do,” picks up Powles. There is much to think about what it means to be alone in the landscape, and who gets to write these stories.

An incredibly insightful event, the authors – alongside chair Andrés N. Ordorica – tread the slim lines between personal lives and the world around, and how writing feeds into that. Aguon’s favourite writers “do language, but they also do battle” – their words are more, they’re bridges to young people who don’t yet have access to the language to exert their will upon the world. Toni Morrison appears again – her speech on doing language, being intentional, using language in service of a larger project. From belonging, to beauty, exploration, to making space for joy; both Powles and Aguon speak to something bigger in their work, sometimes loudly, sometimes quietly, always inviting to lean in and listen. (HM)

Open Water by Caleb Azumah Nelson is a book with a pulse; when readers enter it, they are consumed. Joining poet Salena Godden, the duo explore the story behind the story – the rejections along the way, how Open Water pulled itself out of Nelson, their affinity for the British Library and access to books.

Photography, Nelson notes, elicits a very immediate feeling – you look, you see and feel; language, you’re bending and shaping and warping how sentences appear to elicit a feeling. He talks of learning the power of his own vulnerability; if he was to present himself honestly and note hide, that there was something there. “I just want to be a good man and an honest writer,” he says, in a nod to James Baldwin. How can he lean into that? What does that look like beyond the page but also in life?

With a background as a photographer, even when he’s not making images he’s constantly seeing things – he sees the small details that look so astounding and feel special, and that feeds into everything he does. As he traverses notions of home, of Ghana, of storytelling, of music, this is an event that highlights how his work lives and breathes. (HM) 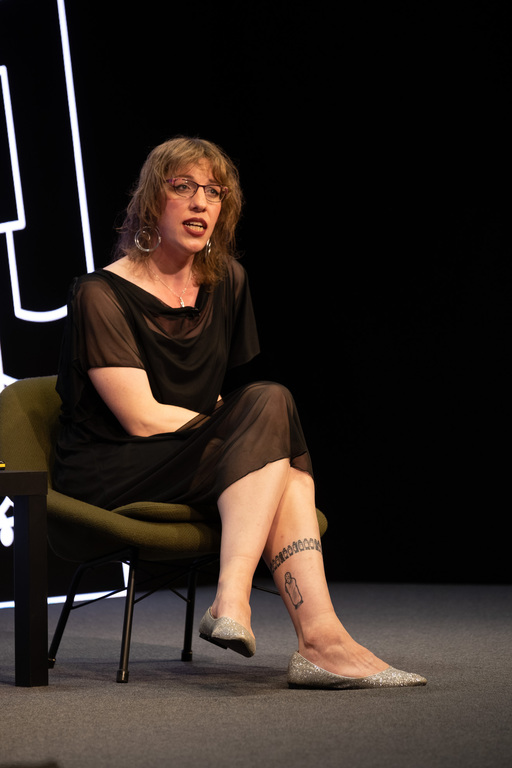 Harry Josephine Giles & Ely Percy: The Drama’s in the Dialect

Harry Josephine Giles (pictured) and Ely Percy’s latest works feel quite different on the face of it: Giles' Deep Wheel Orcadia is a ‘gay space community fantasy’, while Percy's Duck Feet follows Kirsty Campbell’s teenage life in working class Renfrew. They are, however, bonded by the depths of their dialect into which they dive.

Kirsty’s voice just appeared to Percy one day, and so her life unfurled one short story at a time, before they threaded them together into a novel over a decade later. Percy was receiving good feedback, but some notes that it wouldn’t work outside of Scotland due to being in Scots. Giles nods along – though, this ‘not working’ often feels more a nervousness than a reality. It can be harder work to publish minority languages, and more effort to read a language you don’t know, but it is worth it.

Minority language writing often has the expectation of home, or nostalgia. “What do I do to counter that?” says Giles. “Let’s go to space.”

The duo talk about their favourite books, their own viewpoints on a standardised language, refusal to engage with language as tea-towel words, complex utopias, how the suppression of language comes from colonialism and empire, a celebration of language itself and more. A real stand-out event, and two books to add to the to-be-read pile. (HM)