Michael Pedersen pays tribute to friend and comrade Scott Hutchison at the Edinburgh International Book Festival. We talk to Pedersen to find out what's in store at his Oyster Party for his dear friend

Words have power. Shuffle them around even just a little bit and entire meanings can change. ‘Michael and Scott’s Oyster Party’ becomes ‘Michael Pedersen’s Oyster Party for Scott Hutchison’. Such a little change says so much.

“It was to be a story-filled, sumptuous and lovey gig where we nattered through the past year together: shows, holidays and the realms in between,” explains Pedersen, about the reimagined event. “There would be an oyster or alternative included in your ticket price for a giant toast of champions.”

The event has transformed instead into a celebration of Hutchison’s life featuring powerful, playful verse from Pedersen alongside some of Hutchison’s close friends – Hollie McNish, Withered Hand and E A Hanks. The five-piece have performed together before – as the Cold Turkey Collective – so their involvement was self-evident.

“We will perform our own work, new work inspired by him, and maybe a group finale (as we did before, with Scott in tow),” he says. “Elizabeth Hanks is an LA-based writer and friend of Scott’s from his time in the States. I invited her to join the bill as we've become close, post-Scott's passing – having only known of each other through the stories he told us both. I like to think of this as completing a circle he started drawing for us.”

The Oyster Party’s oyster in question is Pedersen’s second poetry collection, released in 2017 and illustrated by Hutchison. As friends clearly working from the same wavelength, Hutchison’s drawings go hand in hand with Pedersen’s words as they wander the pages together: wild, sensual doodlings served on ice.

“In Scott’s words, illustration is the only thing he was trained to do – I loved every glimpse of the art he showed me,” says Pedersen. “His illustrations boast deft hidden detail, hilarity, naivety, they take childlike leaps, as well as confronting head-on that more lugubrious stuff. They share a kinship with my poems and I loved knowing he was drawing prolifically. It seemed to open something playful in him; playful yet accomplished.”

Poet Hollie McNish had been planning to attend the original event in punter capacity, before being invited to take part in this new evening, this time as a pal of Scott’s and fan of his work. For her, the correlation between song lyrics and poetry is a strong one that highlights a mutual emotional stimulation and a sense of community in shared thoughts.

“It’s that feeling when something you’ve been thinking or feeling is then articulated by someone else in such an exciting or passionate or beautiful way and you’re like: ‘That! That’s it!’” she says. “That feeling is a lovely one. I love it at gigs when someone reads a poem or sings a song about something I feel passionate about and I think: ‘Well, I don’t have to try to write about that now, it’s been done!’”

While it’s the atmosphere and reforged camaraderie that McNish is most looking forward to, the toughest part of the evening, by her own admission, may be having to eat an oyster – she’s been a vegetarian since she was a child. Her overall ambition for the night, though, is to honour Scott with a performance worthy of his affection.

“I will try my best to do a set that I think he would have enjoyed and respected,” she says. “Well, no. Enjoyed, not respected! I think for me, that’s all I can hope to do. So, likely the ruder side of my writing.”

Pedersen’s hopes for the evening are equally as humble. Despite being sure he’ll be too concerned with making sure everything goes off without a hitch, he also has firm plans about what he hopes the event will entail.

“It’s a safe space to cry, laugh, lament, chant and cheer for someone you love and miss amongst kindred souls,” he says. “No judgement, no egos, no questions asked.”

More than anything, it’s a place for people to reminisce, share stories and remember what it is about Scott that is so special. The outpouring of grief when Hutchison passed was remarkable: fans across the world shared stories about how his music helped them through rough times, while his good and kind heart was celebrated in lesser-known anecdotes from fans and friends alike. Pedersen is ever-eloquent and un-editable when describing his old pal.

“I called him H-Craft,” he says. “This sentient creature was in many ways a wizard of human emotion, casting out spells of song against fierce forces that rallied in the murky firmament above. He was consistently processing the great cliffs of human experience that would tumble down upon him – sculpting from the rock majestic shapes. His imagination was vivid and abundant and this came across more starkly in his illustrations – the forlorn made funny, the melancholic shadowed in love, every whip of wonder. He was Owl John as well as Scott Hutchison of Frightened Rabbit. That’s worth exploring.”

The value in banding together in times like this is hard to overstate, and the fact that the Oyster Party goes on is important. A crucial occasion for friends, family, loved ones and fans to come together and honour his legacy, it quietly reminds everyone involved that keeping his memory alive is a vital way of remembering Scott and getting over the stigma of talking about loved ones and mental health. As Pedersen says: “I think you lose a bit of yourself when someone so close leaves this spinning planet, a little more goes if they were younger and tragedy is close at hand. We’re not getting the clever bastard back (not as we know it) and I get that, so will take little tastes whenever we can. I really, REALLY fucking miss him.”

An excerpt from Oyster's title poem: 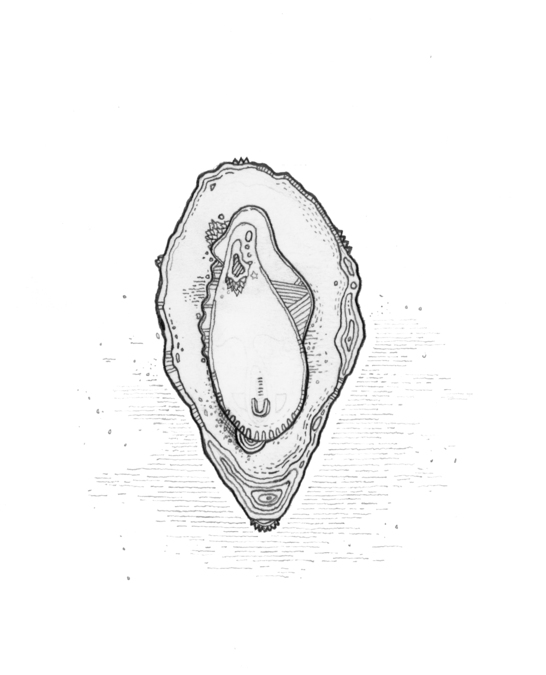 No bones in tongue nor oyster,
though a marvel nonetheless:
a zinc-pumped seabed filter system,
oyster has many magics and molluscy mischief, is worthily lickable –
yet she had never licked an oyster!
Her tongue recoils gingerly, processing
them flavoursome fecundities;
the fleshy grope is silent and wordless,
the moment’s après, noisy and weird,
rattle around, shake out a timid smile.
Not to be bested, the oyster too tastes
tongue, zaps back, a shiver to the spine
from the aquatic journeyman.
How does tongue taste to oyster?
Best not to know.