Each year, the Platform exhibition presents four early career artists in the prestigious context of Edinburgh Art Festival. For 2019, the artists have been selected from an open submission by Monster Chetwynd and Toby Paterson

Driven by research into fantasy fiction and environmental responsibility, Anna Danielewicz considers critical ecological questions by exploring the relationships between human and non-human subjects. Voun Town is based on a speculative fiction story about Vouns, a species who exist between verbs and nouns. Danielewicz expands her fiction beyond writing itself to include sculpture and video in an installation environment. annadanielewicz.com 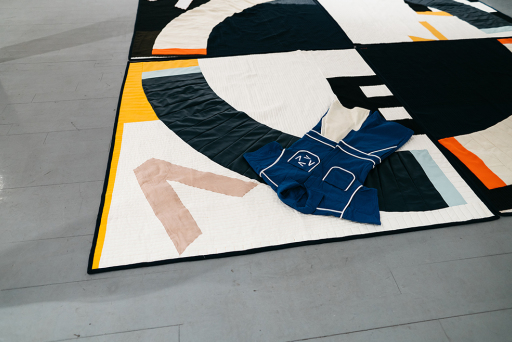 (Born 1993, Sheffield, based in Glasgow)
Dawson graduated from Glasgow School of Art in 2015 with a BA in Fine Art: Painting and Printmaking. Recent exhibitions include Passé, with Aniela Piasecka and Francis Dosoo, as part of the MScR in Collections and Curating Practices, The Fruitmarket Gallery, Edinburgh (2019); It Leaks, Enclave Lab, London (2018); Rousing, Slugtown, Newcastle-Upon-Tyne; Watertight, Holmwood House, commissioned by Glasgow Doors Open Days, Glasgow (2017) and Keep the Pavement Dry, VoidoidARCHIVE, Glasgow (2017). Dawson was the recipient of the Dewar Award in 2016 and has recently been awarded the commission for a new public mural at Queens Park Arena in Glasgow, due to open summer 2019.

Inspired by her research into the history of smocking and pleating, Joanne Dawson’s sculptural works are derived from traditional textile techniques and related social histories. Smocks often had embroidered symbols or imagery of the occupation or trade of the wearer; drawing on these histories of object and place, Dawson explores how our social histories and identity can often be shaped through embellishment. joannedawson.co.uk [Image: Joanne Dawson, Aniela Quilt 2019 by Daniel Cook]

(Born 1993, Ipswich, based in Glasgow)
Maberly graduated from Edinburgh College of Art in 2017 with a BA in Intermedia Art, and as part of this course he studied for an exchange semester at the Estonian Academy of Arts in Tallinn, Estonia. Recent exhibitions include Casual Nexus, The Glue Factory, Glasgow (2018); Simply Beaming, Screened at HOPE, Engaru, Hokkaido, RAT HOLE GALLERY, Tokyo and Embassy Gallery, Edinburgh (2018); The Waiting Room, The Number Shop Studios & Gallery, Edinburgh (2017).

Documenting his efforts and motivations as a Kate Bush fan, Harry Maberly makes recreations of the music videos for Bush’s Wuthering Heights and Babooshka. Combining performance and film, he investigates the phenomenon of fandom and the role of re-enactment in society’s consumption and regurgitation of mass media. harrymaberly.com 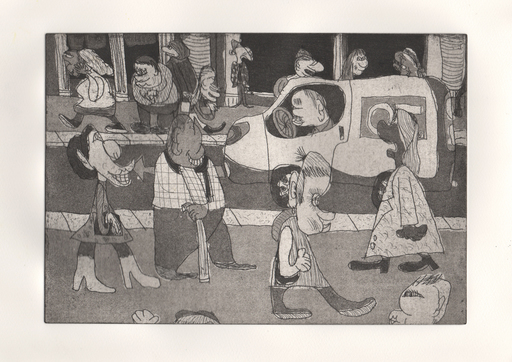 (Born 1994, Belfast, based in Glasgow)
McKenna graduated from Glasgow School of Art in 2016 with a BA in Communication Design. Recent exhibitions and performances include KNOCK KNOCK: Humour in Contemporary Art, South London Gallery, London (2018) and Total Enlightenment, Good Press, Glasgow (2018). McKenna has performed at Fantom Salon, Old Hairdressers, Glasgow International (2018) and was recently awarded a place on the Dumfries House Scottish Artist Residency (2019). He has published three books including HEY YOU! (Umpteen Press); Total Enlightenment (self-published) and Bunged (O PANDA GORDO) and is a regular illustrator for Elephant magazine.

Suds McKenna’s series of crowd studies record busy high streets, food courts, train stations and parks, often employing the aesthetics of cartoon and comic traditions as a mode of communicating character and identity. McKenna uses humour to address issues of identity, personal narrative and mental wellbeing, in a series of character-driven works that include drawings, comics, prints and sculpture. sudsmckenna.com [Image: Suds McKenna, Outside Bar Burrito 2018 courtesy of the artist]