More like 'Merry Christmas and a Ha-Ha-Ha-ppy New Year' from The Skinny!

The Off Menu boys have become unlikely faces of the professional and (let’s face it) somewhat sickly sheen to which comedy podcasts have succombed since brands realised their PR potential. Which is what makes former Ghostbuster Dan Aykroyd steamrolling through their usual format so delicious to listen to. Clearly there solely to flog his Crystal Head vodka, Aykroyd monologues from start to finish, rattling through his menu breathlessly, before ending with, “I hope I helped you guys out with your little project.” It’s tragi-comic to hear the hosts realise their comedy-legend guest has brought no sense of humour, no awareness, and no care for their chart-topping success. [Louis Cammell]

Very genuinely one of the things that kept me going through lockdown, it feels like I’ve been waiting an age for a new installment of the lovable Charalambos family from Stath Lets Flats. The new season entered my life not with a bang but a beep beep beep beep beep beep. Now it feels like a gap has been filled, I’m back to exclusively communicating with my pals through Stath quotes, and oh my crump, I couldn’t be happier. If you catch someone running down Princes Street in a suit, very gently holding their tie, and 5ive blaring out of their back pocket, I can’t guarantee it won’t be me. [Yasmin Hackett]

Tom Mayhew's Edinburgh Fringe show From Rags to Slightly Newer Rags (Tom Mayhew's living room, Zoom) told how Mayhew became an out-of-work 'working class hero'. He has a nice way of letting the audience into his world, so in my memory I forget this was Zoomed-in. Like many comedians over the pandemic he knew how to make this apparent drawback work for him over an hour that felt both warm and uplifting.

On a Monday night in November, The Jinkx and Dela Holiday Show (Queen's Hall) made up for a lot of staying in over the last two years. A festive romp with Drag Race stars BenDeLaCreme and Jinkx Monsoon was like watching a glorious old-school double-act take down the queer-baiting of modern Christmas. Take that Santa! [Ben Venables]

The past 18 months have provided me with a heady mixture of crying and laughing, often simultaneously. While I’ve been privileged enough to maintain a job, my health and a roof over my head, the pandemic ravaged my mental health – such that even the question “funniest thing you’ve seen this year?” provokes a kind of hollow, fatalistic chuckle. Joking? At a time like this?

I’m hesitant to promote Inside – the third Netflix ‘comedy’ special by tall American wunderkind Bo Burnham – as a laugh-a-minute ride. Its claustrophobic 90 minutes certainly pack a punch – full of wry, satirical musical numbers (easily his best songwriting to date) and frankly jaw-dropping lighting and visual compositions, all written, shot and edited by Burnham. But – appropriately for a time full of unshakeable gloom – the jokes (it IS funny, I promise!) gradually give way to a vulnerable exploration of lockdown’s psychological toll. An unmissable spectacle. [George Sully] 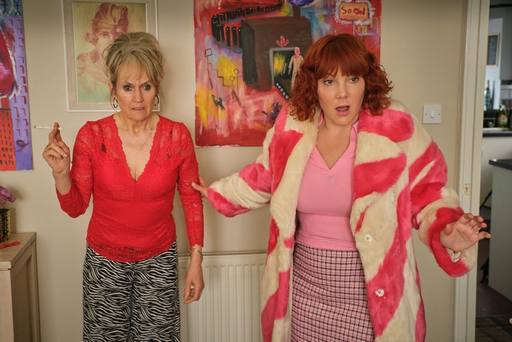 I can’t not shout about the stone-cold successes which are We Are Lady Parts and Alma’s Not Normal. No doubt if the main characters or writers were male, you wouldn’t be able to move for their praise. As it stands, I’m ecstatic to be their cheerleader. Absolutely shattering sitcom conventions, both series could give the gammon parade copious heart-attacks (here’s praying) with care-experienced sex workers and Muslim women actually enjoying being Muslim front and centre. If subverting social norms for laughs were a game, both Alma and Lady Parts would be home runs.

Oh, also overhearing a 14-year-old boy trying to impress some girls by saying "Uh yeah, I took a load of paracetamol recently and got REALLY high." [Polly Glynn]

“This is the funniest thing I have ever seen. I am scream-laughing in the middle of the street at Malcolm right now!!! Hahahahahahaha,” went my response to the funniest thing I saw on the internet this year. My friend Laura didn’t check the dimensions of a coffee table before buying it and when it arrived she posted about it on Twitter alongside a photo of this tiny table which absolutely broke me. It reminded me of that scene in Zoolander: "What is this? A centre for ants? How can we be expected to teach children to learn how to read... if they can't even fit inside the building?" [Tallah Brash]