Comedian, writer and podcaster Siân Docksey submerges herself in the pastel hues of much-loved 80s sitcom The Golden Girls

I’ll be honest: I got into The Golden Girls for real-life long-term planning. Sharing a house during your senior years with three older women in Miami? Sounds cracking, and strategically sound. The only missing detail from a millennial’s perspective is the absence of climate crisis. Between snarking about incontinence and hitting on priests, I see retirement as mostly insulating my house from complete atmospheric annihilation. Luckily, if The Golden Girls speaks truth, there’s always plenty of chiffon.

The sitcom follows divorcée Dorothy, her widowed friends Rose and Blanche, and Dorothy’s 80-something mother Sophia living in a chintzy, pastel-coloured Florida house. Yes, it’s bad form to introduce female characters by their previous relationship to men, but that’s the premise of the show: finished with raising families and having outlived or outwitted their husbands, the three women join forces and make a home together. Dorothy’s mother turns up unannounced in episode one after her retirement home burned down, and her deadpan commentary makes the other three seem like scurrying, hapless 20-somethings.

And between jokes about ageing and toupées, the show unfolds just like that. The girls worry about exes turning up at parties, about your landlord-slash-housemate getting married and leaving you in the lurch, and oddball family members launching crackpot business ideas. Dorothy’s teaching job is stressful and paints a cartoonish picture of the Florida landscape outside: a Mad Max-style wild west of crime, anarchy and queer punks that never crosses the threshold of the Golden Girls’ palm tree-shielded pink home. Sweet, daydreamy Rose fusses over her more worldly friends who tease her relentlessly for being dippy and naive. Beautiful Blanche twirls coquettishly through a whirlwind of lovers, being unapologetically horny about the pool attendant in a wet shirt and anyone within a 60-year age span.

I’m not going to pretend it’s my new favourite show. The Golden Girls doesn’t hold back on open sentimentality, and the women saying loudly and clearly, over and over again, that in the end what matters is they’ll always have each other. A few episodes in I was drifting off during the hugging and hand-holding, and snapping back to attention when Sophia marched onscreen to be a mean old lady. She’s a brilliantly-written character who point blank refuses to be patronised and coddled like an old person. Except when it serves her to conveniently 'forget' it’s inappropriate at a buffet to make jokes about wee.

However, each episode has plenty of farce, flashes of dark humour and sweetness. You can’t help getting occasionally blindsided by the actors’ performances. Dorothy in particular, played by Bea Arthur, cycles effortlessly between delivering acidic one-liners, being a clown, and letting rip dramatic monologues packed with frustration and vulnerability. I feel like I’ve met this character and I want to be her friend. You feel the wry cynicism that comes with getting older clash against wanting to believe in romance and dreams; we watch her strident confidence occasionally crumble under self-doubt. She’s a big personality who holds the other two and her mother in check, taking Blanche’s wide-eyed pining and Rose’s stubborn idiocy with eye-rolling panache. The women take it in turns to lift each other out of their worries, social disasters, and self-inflicted hot messes, in a friendship group dynamic that’s instantly recognisable for any generation.

Every character is supported by a script that’s warm, silly, and never leaves a scene without a solid gag. It’s very comforting to visit The Golden Girls’ world of ice teas by the pool, witty philosophising about marriage, friendship and family, and vivid power suits for every lunch. My actual flatmate caught me chortling quietly at jokes that have staying power beyond the mid 80s, and walking round singing 'thank you for being a friend' to tins of tomatoes, which I’m sure is exactly what the producers wanted.

Like the characters at its heart, The Golden Girls has aged stylishly and self-assuredly. You become fond of the gang immediately, and start wondering who in your friendship group you’d retire to Florida with. Depends on the rising sea levels. Whichever friend could fight an alligator, probably. 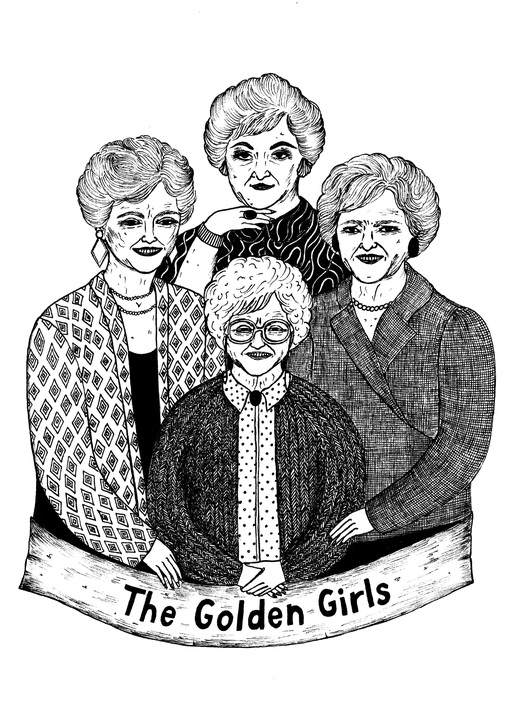 Siân Docksey hosts Pole the Other One!, a podcast about Pole Dancing available at rss.com/podcasts/poletheotherone or wherever you get your podcasts

If you happen to be in the Big Smoke in November, she’s performing her solo show, We Live in a Human Dream, at London’s Museum of Comedy on 18 & 19 Nov

The Golden Girls is streaming now on Disney+