I read about The Rag Trade years ago. A 1960s workplace sitcom about female textile workers with the punchline that they’re always going on strike. It sounds interesting! It sounds risky! Sometimes when delving too far back in the archives of 20th century comedy the best you can hope for is an artifact best viewed with the humorless curiosity of an archaeologist meticulously brushing silt off a cacked glob of bronze, and the worst is a low-res bigotry winceathon.

In researching this article I watched the original 1961 series of The Rag Trade, two episodes of On The Buses (episode 1, and episode 60), the first episode of The Rag Trade 1977 remake, and one episode of the 1990 Norwegian remake of The Rag Trade ‘Fredrikssons Fabrikk’ (which I didn’t really get a lot from). The Rag Trade is not only a good time, but worth your time. The original unblemished The Rag Trade is purer and better than anything its later incarnations could replicate. It carves out a pristine and undiluted form of the workplace sitcom the likes of which I have not seen before or since. It’s a candle that burnt briefly, before the winds of change brought colour television, content deregulation, and a dismal era of 1970s bawdiness.

The show is formulaic. Comfortingly so. Episodes begin with Peter Jones’ character, Harold Fenner, the long-suffering but duplicitous boss of Fenner’s Fashions, assuring a client of his workforce’s dedication. Cut to the factory floor where ‘the girls’ are invariably dancing, gossiping or cooking an egg on an upturned iron.

The show’s main strength is the female ensemble cast of the shop floor workers. The writers tried to make all the characters funny and engaging, but as the cheeky underdogs the workforce are clearly the protagonists. We cheer when they skive, and weep when they are caught. 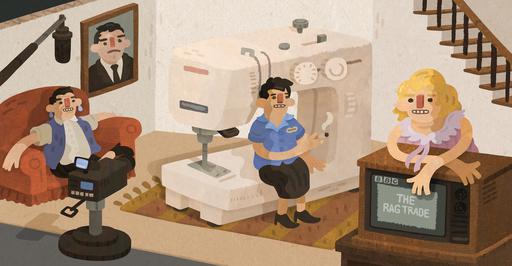 Miriam Karlin plays a militant union leader, Sheila Hancock a 60s ‘bimbo’ and Esma Cannon is an easily confused elderly worker. Cannon’s performance steals the show. She’s incredible; imagine Mrs Doyle but fast. Her approach to physicality looks like the sped up footage from a 1920s hand-cranked camera. It is incredibly absorbing to watch a comedy from 60 years ago where the funniest character is a 56 year old woman.

I’m a sucker for sight gags. There’s a golden era of comedy where all the writers and performers had developed instincts from vaudeville and music halls. Gags and props were designed to be seen from the 50th row of an auditorium and are rendered ludicrous by tight shots of BBC cameras working in confined sets. In every episode Reg Varney either falls off a piece of furniture or has a torrent of liquid squirted in his face; each time scaled up into pantomime proportions. In Episode 1 they accidentally steam press a baby’s bottle and it comes out a meter wide and stiff as a board. Characters are constantly repositioning each other by the arm so they just-about-plausibly can’t see the absolute mayhem unfurling in their peripheral vision.

The show is fascinatingly, unwaveringly about work. You can watch the whole of The Office and not really have a great idea about what these people actually do. In The Rag Trade, the show and its humour never strays too far away from textiles: Miriam Karlin accidentally sewing a winning betting slip into the collar of a client’s dress, Esma Cannon slicing a loaf of bread with huge fabric scissors, Sheila Hancock sewing a Rizla shut because she’s struggling to make a roll-up. Plots revolve around clients, orders, pay rates, punchclocks, catering, childcare. In one episode the girls go on strike to demand a creche so domestic obligations don’t force women out of the job. This would be considered a radical idea to depict in a sitcom 60 years later!

The Rag Trade is a refreshing kitsch classic for clownish 21st century sensibilities. Although, just as I was writing the final draft I watched the series one finale: a Christmas special where the girls start a side hustle making racist dolls. Once again, the long shadow of the British empire has left a dollop of poo on an otherwise lovely relic.

Catch Sean on Twitter and Twitch (@seanmorl)
Watch Escape The North on Twitch every Friday at 8pm at twitch.tv/escapethenorth
Listen to Sean Morley and Jack Evans' Mandatory Redistribution Party podcast every other Monday, available on all podcast platforms