ICYMI: Planet Caramel on Sorry I've Got No Head

Richard: I guess we never will David.

David: It’s a new sketch show that we can all watch together. It’s called Sorry, I’ve Got No Head and it’s been going for three series and has 39 episodes in total. Also it’s not new, it’s from 2008.

Alex: That sure is a lot of episodes David! How come we’ve never heard of it?

David: Because it’s 'for kids.' Like raves or butterfly farms.

Planet Caramel all watch all 39 episodes of 'children’s' sketch show Sorry, I’ve Got No Head.

Alex: I have consumed an incomprehensible quantity of sketch comedy, and I would categorise that as ‘a pleasant surprise’.

David: That was as good as any sketch show for adults made by the BBC in the last fifteen years. I think the fact it’s aimed at kids means the writers could actually get away with more than they can in most shows aimed at adults. An adult sketch show has three possible settings: 'witty', 'gross' or 'mad'. This manages to be all three interchangeably without showing off or being self-conscious.

Alex: Yeah, SIGNH treats kids with more respect than a lot of adult sketch shows. There are fart jokes – because farts are hilarious – and there are repeating sketches (like the old ladies who think everything costs ‘A THOUSAND POUNDS’), but another repeating bit, ‘Maybe my bees can help!’, is great because you never know where James Bachman and his bees will turn up.

David: This show is obsessed with bees. Which is a refreshing surprise because everyone else seems big into bones/skeletons these days.

Alex: It’s not recurring because it’s afraid of surprise, it works because of the surprise.

Richard: It’s just like a normal sketch show but they don’t talk about blow jobs or say the word cunt. Although there are still quite a few sketches that just didn’t work.

Alex: That true: some of the sketches fail because you’re spending too much time working out why you should find it funny, such as the ‘only child in a school on a remote island’, or the boy who’s ‘getting into a lot of deer stuff’. When I was a pre-teen, I definitely wasn’t self-aware enough to want to watch sketches gently lampooning my burgeoning moodiness.

David: When I was a pre-teen I was watching Fry and Laurie to look like a big clever grown up boy but I wish I’d been watching this. As far as I can remember there are no Fry and Laurie sketches where someone uses a hollow dog to smuggle buffet snacks.

Alex: Do a summary Richard, we’ve got a new hit sketch show to write!

Richard: 50% of SIGNH is sketch comedy in the best sense, and 50% is ‘kids comedy’ in the worst sense. 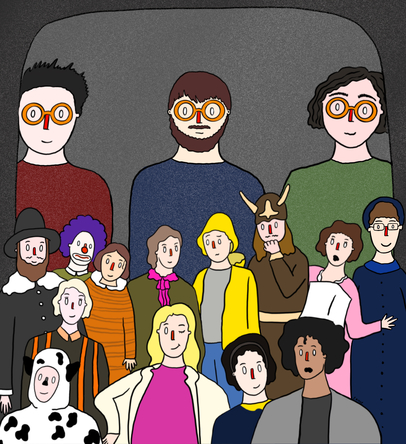