There’s been a lot of talk recently about the new series of Spitting Image: a writers list that boasts of some of the biggest names in comedy but can’t find the joke. I’m a comedian who sees themselves, somewhat delusionally, as a kind of satirist, so I’ve been told for years to check out the original series. Prompted by the remake, I decided to take a look.

First an admission. Through my parents' lack of initiative and my own bone idleness, I confess I was not born when the first series of Spitting Image was released. And even by the time the last episode aired in 1996, when I was eight, I was still woefully uninformed on politics. So while these days I can point out a politician as obscure as Ed Davey, back then I wasn’t so savvy. Admittedly this makes the show a little tricky to understand. To overcome this challenge, I simply pretended I knew who each puppet represented using my most trusted skill – lying to myself.

I was told I would get the cruelty I so badly crave from satire and while it wasn’t enough for my twisted commie soul, I felt fairly sated when in episode five the Queen asks Margaret Thatcher how “all the Nazis in her cabinet are doing.” But perhaps I’m biased. I believe satire can only truly be done justice by angry lefty weirdos. I guess through my rose-tinted glasses, the 80s and early 90s had that sharper knife edge over today’s political comedy, where the inane and the superficial are not a starter but the main course. I suppose it was also easier to mock politicians way back when they were pompous and proud as opposed to today when our political leaders are caricaturing themselves before we’ve even had our Shreddies. 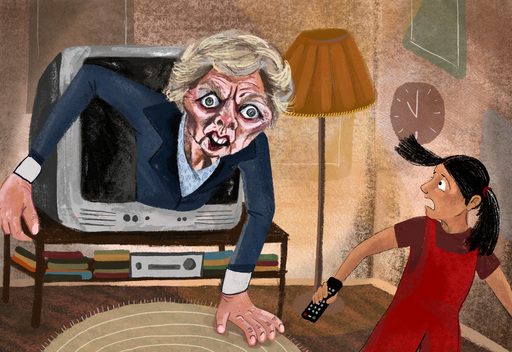 Something I enjoyed enormously about the original series is the sheer speed with which we travel through sketches. As a dedicated millennial since birth, my attention span is shorter than Rishi Sunak (hey, this satire stuff is easy!) so I really appreciate comedy getting to the point. In a concept like Spitting Image, as we have recently seen, it is so easy to come up with an idea and take so long to get to the punch that an audience feels like they are tied to train tracks, longing for the train to make contact. The Spitting Image I watched had much more of a knockabout feel, where, lonely saddo that I am, I derived a lot of fun imagining writers asking “what if?”

The “what ifs” of the show feel so much like spitballing that you get the sense that the writers are playing with the characters like, dare I say, puppets? Hmm? A striking feature of the original series is that there is a fluidity to the humour that pulls it into the surreal which, in my mind, is the key to good satire. The original Spitting Image feels like it has heart because the writers are weaving through reality and absurdity seamlessly.

A troubling aspect of Spitting Image is the depiction of non-white characters. Caricature puppets don’t lend themselves terribly well to “not looking racist” and the depiction of non-white characters seems to focus predominantly on their race. I would be truly amazed if professional satirists couldn’t find another angle on ROBERT MUGABE other than a naff racist joke. It could be that the programme has aged badly but this was the 1980s, not the 1900s, so I doubt it.

When watching anything later than everyone else, the question that cries out to be answered is – “would I have liked this if I watched it at the time?” Sadly, no. While I can appreciate the nuance of the humour now, I think this has been exacerbated by years of watching satire done weakly. I often spend a solemn midnight hour in silent meditation trying to work out what satire could or even should be. While I feel the original Spitting Image is closer to the vision that visits me, looking back at my life, I can’t get away from one thing. As a child, the puppets would have scared the shit out of me.