It was 2012, I was working in a café and bar in central London, the Olympics were on and spirits were high. Instead of having the time of my life, I spent most of my shifts trying to figure out how to pour a pint so it didn’t spill over while simultaneously making a gin and tonic. Between spilling a lot of drinks, I was listening to my colleagues quote Parks and Recreation.

There were lots of other twenty-somethings screaming ‘Treat Yourself!’ as they ate crisps behind the kegs and ‘Bye Bye Lil’ Sebastian’ as they left for the night. Never one to be left out, I would laugh along and try and join in despite having never seen an episode. To me, it sounded like a copy of The Office and despite loving sitcoms I was going through a bit of a snob phase: "Why would I watch a copy? What’s wrong with original thought?" Oh young Helen, so foolish.

I’d watched a couple of bits and pieces before but have only got around to watching it fully during the pandemic. Wow! I could not have been more wrong. Sure it’s a mockumentary but the pure silly fun joy that pours from all the characters makes it entirely its own show. Set in the Parks and Recreation department in Pawnee, Indiana, Leslie Knope (Amy Poehler) and Ron Swanson (Nick Offerman) manage their team through building parks, running political campaigns and office romances.

What makes Parks and Rec such a delightful watch is the love the characters have for each other and the fun they share. There is no villain. Sure Tammy One and Two are not great and some of the older council members aren’t the best lads but altogether they make a cast of characters that you want to jump into the world with, and go to Ron’s cabin for a night with the Pawnee goddesses.

The ensemble cast doesn’t have a weak link among it. I could write an essay on every character, even Gerry/Gary, but let’s just take a moment to celebrate Leslie Knope. She’s not your classic lead. Not everyone knows a Leslie, but my word, what a wonderful world it would be if we all did. Leslie is fearlessly ambitious; a trait often portrayed by women on TV with the caveat that they have no social life and are cold and ruthless. Leslie is not. She works hard and plays hard, men come and go but they don’t run her life.

She’s warm and compassionate and no one would function without her endless enthusiasm. What a joy to see a successful and fun woman living her life. I mean, how can Leslie be so positive when her surname is literally ‘Knope’. Her relationships tie everything together so neatly. The blossoming friendship between Leslie and Ron is a real highlight, particularly when Ron gets married last minute in City Hall and Leslie’s desperate to make it special by handing the bride a bouquet of highlighters.

In classic modern sitcom form, P+R isn’t afraid to take on bigger issues, something difficult to do in episodes lasting 22 minutes. The topics of sexism, privilege and homosexuality are all explored in the show, unerringly with sensitivity and wit. It makes Parks and Rec a big hug full of heart. Its classic sitcom formula of setup, mishap and resolution is comforting but never shy of pulling out a big comedy moment, and in classic American style, a celebrity cameo. We see a lot of regular SNL faces and some of Hollywood’s finest dropping in alongside some of the highest profile names in US politics. Michelle Obama makes a particularly memorable appearance in a later episode as Leslie gets closer and closer to Washington.

I wish I had watched it sooner. Instead of laughing along with my colleagues pretending to know what was happening, I could have joined in with '10,000 Candles In The Wind.' What is life without some regrets though.

Also SPOILER ALERT. Probably should have started with this. At least I didn’t mention that Ben and Leslie have triplets. 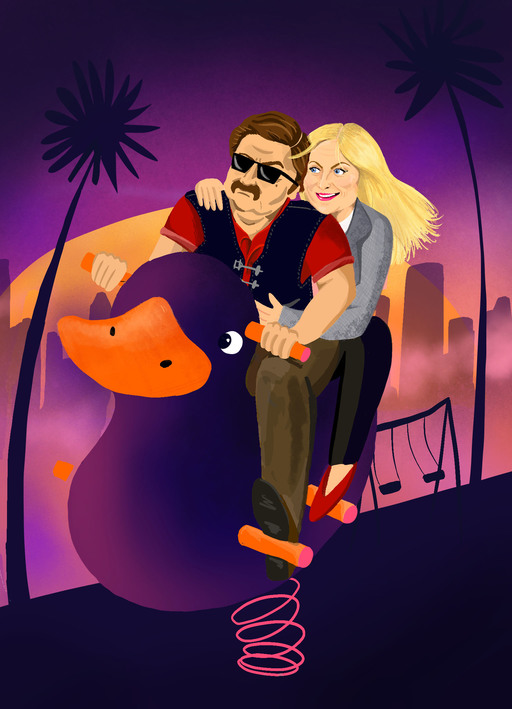 Hear more from Helen on her podcast Daddy Look at Me, co-hosted by Rosie Jones, or catch Helen on Instagram and Twitter @helenbabauer

Parks and Recreation is streaming now on Netflix and NOW TV, and available on DVD