I’m stubborn. If I decide not to watch something, then I’ll stick to it no matter what (like not wanting kids – the theme of my new Fringe show). That’s how I’ve avoided watching The Lord of the Rings for the last 18 years, all because I couldn’t finish the books.

Unfortunately, The Mighty Boosh also fell into this camp. My wife is a fan, and would occasionally suggest watching an episode with dinner, but I was never convinced. (Alas, all she had to do was let me promote my new stand-up show: 3.50pm, Long Room at Cabaret Voltaire, 1-25 August, not 12.) I just got the impression it was too surreal for my tastes; a nihilistic collection of dreams, talking moons and shamans that wouldn’t make any sense.

The Mighty Boosh revolves around Vince Noir (Noel Fielding) and Howard Moon (Julian Barratt): two friends who work in a zoo (initially). It’s clear within seconds that this isn’t a normal sitcom: starting with a casual address to the audience before a stage curtain – perhaps an homage to their Edinburgh Fringe roots – then dropping us into the animated opening credits.

And yet, I was wrong to think it would be an incoherent, surreal mess. Howard still has a clear goal: to defeat a killer kangaroo in a boxing match, so his boss stops circulating nude photos of him. Not a traditional sitcom goal admittedly, but a goal nonetheless which gets resolved neatly by the end. Plus, the show is funny. A particular highlight were the videos Vince finds to learn more about the viciousness of kangaroos.

But, I can’t say it’s aged well. I imagine if watched anew in 2004, it would’ve felt fresh and exciting, like nothing else on television. But while something like classic Simpsons has stood the test of time because it was so good at what it was trying to do, this feels like a collection of ideas that others have done much better. Yes, the training montage was funny, but was it as good as Team America‘s one? I liked the running joke about pocket cups – especially the unacknowledged visual punchline of Naboo selling them for €2 – but was it as skilfully done as those in Arrested Development? And sure, it was funny when Howard felt sad and broke into song, but did it make me laugh as much as Flight of the Conchords’ I'm Not Crying?

I’ll try at least one more episode, but feel I’ve missed the opportunity to fall in love with Boosh. It’s a shame, because I know how beloved it is, and also because Noel Fielding is great and should be in way more stuff (he’s a complete natural on Bake Off, and Big Fat Quiz of the Year still haven’t topped his Goth-Detectiving 2006 appearance). If nothing else, writing this has taught me to perhaps not be so stubborn with avoiding stuff in future. After all, I can’t believe I nearly missed Howard brilliantly punching a kid in the face, followed by a shot of him lying unconscious on the floor. Hilarious! (Did I mention I was doing a show about not wanting kids?) 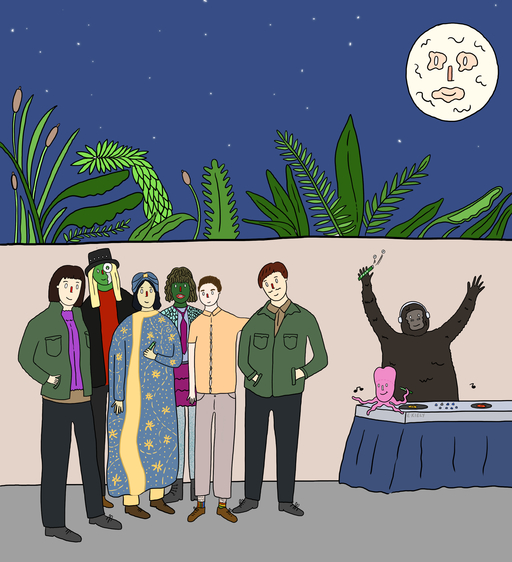