I have never watched The Larry Sanders Show. It’s not that I didn’t know what it was, and indeed I’ve spent enough time with other comedians discussing it to be able to know that when they were holding their pint to their mouth I should say something along the lines of “It’s a metatextual masterpiece.” It’s among a few phrases you learn on the circuit that get you by. Honourable mentions also go to, “I don’t reckon that’s what actually happened,” and, “I saw him starting to do bits about how much of a feminist he was, so it was only a matter of time before something came out.”

For those as uneducated as I was two days ago, let me smugly sprinkle you with some of my newfound knowledge. The Larry Sanders Show is a late-night television show about the making of a late-night television show. Garry Shandling plays Larry Sanders, a traditional American talk show host who deals with the pressures of the entertainment industry while also going on television every night. That’s right, you’re reading an article about a show about a show, which is likely a level of abstraction never intended from the original media.

Admittedly, I am sorely tempted to see how far down this rabbit hole we could go. Maybe someone could write a poem about this article, and then somebody else do a TikTok dance based on that? In 200 years’ time, there could be entire discourses dedicated to one of the many films inspired by the genre created from this piece you’re reading, all part of the sprawling DCLSAU (David Callaghan Larry Sanders Article Universe). Hard right commentators from Reddit 4.0 will voice their disgust that the character Paragraph Three is played by a woman of colour. For the avoidance of doubt, I wish every paragraph to be played by a version of the hologram of Kim Kardashian’s father that Kanye West commissioned for her 40th birthday. They can be made distinct from each other with the use of comical beards and hats. The author has spoken, that’s now canon. Your move, Marvel. 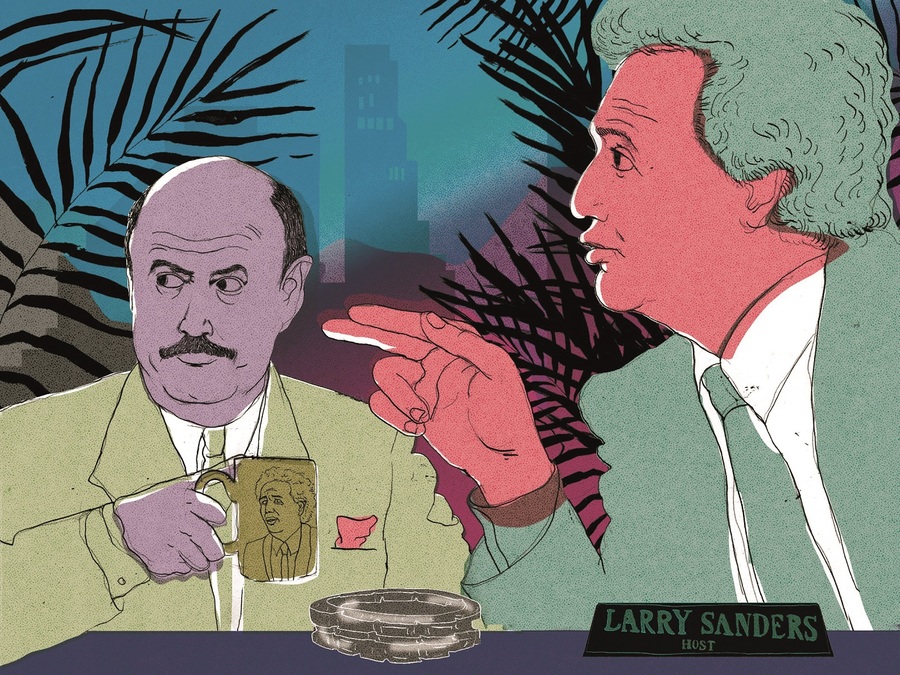 The issue with many sitcoms about other media is that the writers and performers of them are suited to making sitcoms. Whether it’s stand-up or dramatic theatre, the show within a show often feels forced and disingenuous. This is where Shandling shines. Touted by many to be the replacement for Johnny Carson before he handed The Tonight Show over to Jay Leno in 1992, Shandling brings a wealth of experience in late-night television to The Larry Sanders Show. The talk show monologues and wry guest interactions are entirely on point, which makes the contrast with the inner workings of late-night TV production stark and refreshing.

The meetings with heads of the network in the very first episode, in which Larry is asked to perform his own commercials, are so delightfully irreverent of corporate America that they wouldn’t look out of place in a Talking Heads or Randy Newman video. They’re almost Lynchian in parts. That’s what makes this television show great. It’s about a group of people who are 'playing the game', while pointing out how absurd it all is. It respects that the audience has insight into the world they are satirising, gifting comedic moments like Larry’s producer Artie, played by Rip Torn, saying "I didn’t know Harrison Ford did impressions, his Carol Channing was terrific.”

The Larry Sanders Show is stuffed with character-driven anxiety, the best example being Larry’s onscreen sidekick Hank. Played by Jeffrey Tambor, Hank’s whole motivation is to grasp at a showbiz ladder that he is consistently worried will be kicked from under him. This is exemplified by his gratitude when Larry allows him to have two tarantulas placed on him during a show, despite his fear of getting bitten. To him, like everyone else in the show, potential death is a price worth paying for the immortality of showbiz fame. It’s wonderful and horrifying in equal measure; a grotesque caricature of an entire industry that viewers comfort themselves as too ludicrous to take seriously. The irony, of course, being that I am only truly appreciating Shandling’s work six years after his untimely death in 2016 – proving it entirely correct.