Our Favourite Comedy Moments from 2018

From stand-up at the Fringe and across the Atlantic, to the funniest specials on TV and within paperback thrillers, our comedy team found a lot to smile about in 2018

Inside No. 9's Live Halloween Special

Laughter and fear are not so far apart in your brain. Both are triggered when we encounter the unknown: the former in the absence of danger, the latter in its presence. For a masterclass in the trade-off between the two, you needed to be watching the Inside No. 9 Live Halloween Special. The indomitable Reece Shearsmith and Steve Pemberton eased us in to a story of a mobile phone found in a graveyard, then cut away feigning technical difficulties. If you were watching the live broadcast, it was utterly convincing, with only a faint doubt – is there danger here, or is it all under control? The rest of the episode hinted at the ghosts and ghouls present in the show’s TV studio, and left us all with skin still crawling. The danger was never there. For a moment though, I'd say most of us believed the technical difficulties at the nine-minute mark. The laughter was from the jokes peppering the brief episode, yes, but also from shock and nerves, and finally relief. [Jenni Ajderian]

Visiting New York recently for the first time, I’d planned to take in some comedy, and was keeping an eye on various listings to see if anything cool was happening. What I really wanted was to see was Adult Swim's Joe Pera but it didn’t seem likely. Within an hour of dropping our bags, after accidentally walking through an industrial estate, we passed a bar with a sign that read ‘Tonight: Joe Pera’ – either evidence that God is indeed real in the land of the free, or pure luck. I’ll opt for the latter. Pera pairs brilliant character comedy with the ability to spin a good yarn. Adopting the persona of a sweet, gentle old man in the body of one 50 years his junior, his material is both absurd and oddly poignant. The other four acts on the bill all brought some serious laughs, and in a year with no shortage of brilliant live shows, TV and Netflix, it’s still the element of surprise – having your expectations shattered – that triumphs. [Craig Angus]

There’s a lot about Lazy Susan’s Fringe show Forgive me, Mother! that is funny, but nothing quite like the moment when Freya Parker uses kitchen sieves for eyes. One simple movement and – voilà – she transforms into a fly, simultaneously adopting an utterly ridiculous facial expression. It’s a simple visual gag that somehow says everything about these two brilliant, silly and confident comedians. Parker and Celeste Dring have an impressive ability of being mature and juvenile at the same time, mixing subtle social commentary with, well, sieves for eyes. And why shouldn’t they? Sometimes simple does it, and those sieves still crack me up months later. [Veronica Finlay] 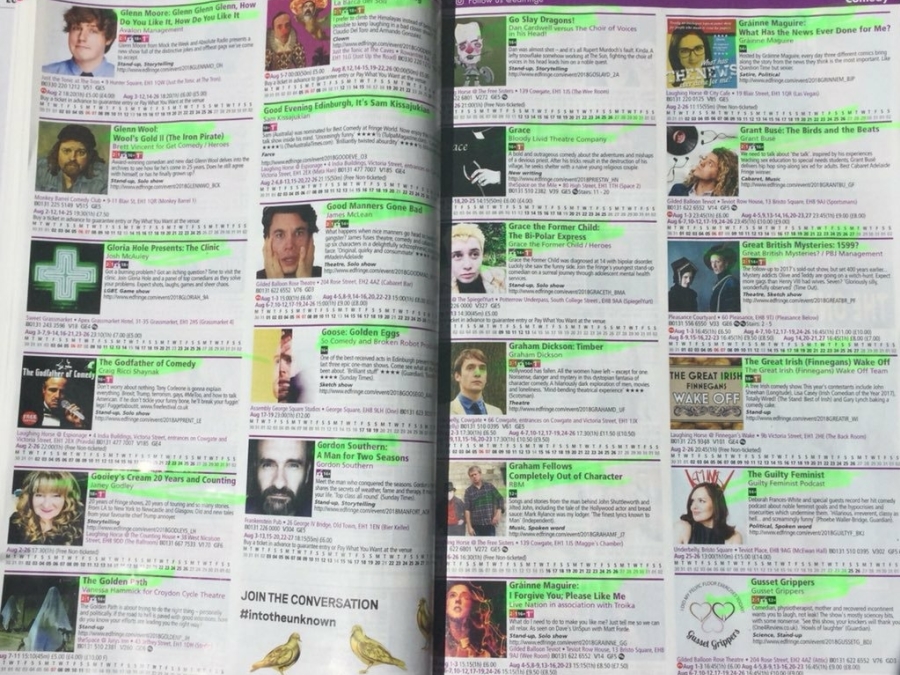 my favourite moment of 2018 was 1 to 27 august .but my editor tell me this is too big to be one moment !!! sooo ,to condense it to one moment it would have to be the thud of edfringe program arriving thru my letterbox in june !!! o boy it the most excitin noise you will ever hear !!! for a little while i even set my alarm clock to make the same noise ,but the excitment of thinkin the fringe program has arrived every single mornin was givin me palpitations !!! [love from fringe dog]

For me, it's got to be seeing Ross Foley as a one-man, Tito Jackson-focused Jackson Five tribute band. There was mention of DILFs and daily routines, but the standout moment was his choreographed dance which proved pretty difficult when his four fellow bandmates were nowhere to be seen. A masterclass in character comedy, the ten minute open spot left me heaving with laughter, and is something I've not stopped quoting since. Genuine inspired lunacy. Tito, I want you back. [Polly Glynn]

Criminally hidden among the never ending deluge of pop thrillers in my big Tesco's two-for-£8 fiction, I stumbled across the dark gem Sweetpea by C.J. Skuse. Glittering with sly hilarity, it's quite possibly the only book about a serial killer that's made me snort-cackle out loud (I was in a cardiology waiting room at the time, there was a minor scene). Rhiannon knows she's a serial killer because she's passed a BuzzFeed quiz. The trouble is, between her frustrating job, cheating boyfriend and the sheer number of bastards who are just ripe for the cull, she's not sure she wants to stop. The sequel, In Bloom continues the story, only now there's a foetus with the voice of Ray Winstone. Smart, deeply original and most of all brimming with inappropriate laughter. [Emma O'Brien]

When a friend messages after midnight to recommend a comedy podcast – "listening to Dear Joan and Jericha – it cracks me up" – you know it's the kind of word-of-mouth recommendation that's a dangerous download if you're hoping to sleep. Written and performed by two of the UK's best comedians and actors, Julia Davis and Vicki Pepperdine, the spoof radio write-in topped the iTunes charts when released in April. And yet, it still seemed to come out of nowhere. The ad-libbing nature of the series – and the obvious joy you suspect Davis and Pepperdine are having during the recordings – gives the quality of the writing an addictive layer. After downloading 'one before bed' you may find the dark humour carries you through, eight episodes later, until dawn. [Ben Venables]