No matter how impressive a line-up Glasgow’s annual Electric Frog & Pressure Riverside Festival delivers – and this year’s crop of acts is particularly enticing – the Riverside crowds prove almost equal value in the entertainment department. The weather – generally sunny with just a smattering of rain over the two days – has the audience in a particularly rowdy mood. One punter getting into the Bank Holiday spirit on the Sunday manages to slip past security guards and clamber aboard the cordoned-off Tall Ship, where he precedes to bust out energetic dance moves for the benefit of the heaving crowd gathered at the Mastermix Stage. At Riverside, you come for the music, but you stay for the debauchery that ensues.

But back to the dancefloor – Slam’s Pressure stage set is a perfect mid-afternoon pace-setter, with the duo dropping bangers by the likes of Johannes Heil and Dustin Zahn to keep the BPM flowing. The rain has stopped, and the vibe is energetic and high in anticipation. Over on the Cocoon Stage, the NYC-based Levon Vincent has drawn a smallish crowd, with perhaps what is one of the more house-skewed sets on what is traditionally known as ‘techno day’. A Jefferson Airplane remix towards the end of his performance goes down a treat, as does his own track Launch Ramp To The Sky, before he rounds out the show with some rumbling beats and jungle vibes, with the kind of seemingly-scattergun but deceptively crafted approach that made his fabric 63 release such a joy.

Slam go back-to back with Alan Fitzpatrick, launching in with some DJ Diego Palacio, and putting on what is surely one of the most energising and crowd-pleasing sets of the Saturday. All great big builds and gratifying drops, it’s a mammoth performance from the Glasgow duo and the We Are The Brave techno heavyweight. Unfortunately it also coincides with ‘peak toilet time’, the moment when many (mostly female) ticket holders are left frustrated with a loooong wait due to an inadequate number of bathroom facilities at the venue.

However, there’s one act on Saturday that everyone is seemingly here to see, and that’s the beloved ‘Papa’ Sven Väth. Closing out the first day on his own Cocoon Stage, he puts on a killer show from start to finish. If you’ve never seen a Väth performance before, you might wonder what all the fuss is about, until you experience for yourself the veteran’s peerless mixing skills and innate knack for knowing exactly when to hand over that long-awaited drop. It’s a jubilant and riotous day-closer from the Riverside favourite. 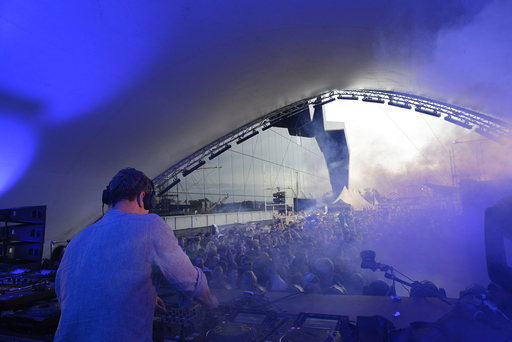 The house acts, many of which include a strong disco inclination, mean a slightly older crowd on the Sunday. Jasper James has an impressively large home crowd for his early afternoon slot on Jackmaster’s MasterMix stage. He creates a summery, Ibiza-esque vibe with some White Isle house; a track that goes down particularly well with the jubilant dancers is Filippo Naughty Moscatello's At The Bar With the Sharks. Throughout the feel-good barrage of tunes Jackmaster can be seen in the wings, enjoying his roommate's uplifting set.

Hunee also appears to be enjoying Jasper James' mixing skills, showing his appreciation with handclaps and dance moves before taking the reins. Keeping up a similar vibe and pace as James' set, Hunee drops an eclectic selection of tracks, with highlights including the old school house grooves of Lil Louis' Music Takes U Away (Vocal Mix) and Acid Blam by Jason Hodges, the latter's harder psychadelic tones setting the scene for some tougher fare to come.

On the Electric Frog stage, taking us into the early evening we have the stalwart techno DJ Derrick Carter produce a disco-esque set for the lovely people as the sun peeks out from behind the stage. It’s not the largest crowd that greets the veteran selector, but house cuts such as Lil’ Louis Music Takes You Away (Vocal Mix) and Dirt Crew’s Rok Da House ensure happy punters dancing along to his groovy beats.

After an ecstatic and floor-filling set from DJ Koze over on the Mastermix Stage – who closes with his own fabulous singalong remix of Lapsley’s Operator – the anticipation for the following act is visible in the increased crowd size, which found yours truly balancing on a raised concrete walkway to the side so as to even catch a glimpse of the legendary Mr G. With over two decades in the game, starting off as a techno DJ with two mates before later starting his own project focusing on “electro tech funk”, Mr G has become hugely acclaimed by his peers.

G's energy is infectious, and he dances just as much as the crowd does. He sings along with clear passion as he drops classic old school house track one after the other – all organ-heavy synths, jagged piano keys and jackin’ beats – to roaring cheers and wolf whistles. Even with his curious ‘non-mixing’ mixing style, it’s a set that has you feeling transported back to the golden era of house music.

Could there be a more fitting finale for a Glasgow dance festival than the pairing of Jackmaster and Jasper James? The cheeky duo, whose back-to-back was kept a secret until the last minute, have the adoring crowd eating from the palms of their hands. From Laurel Canyon to Sam Paganini, their eclectic choices are seamlessly woven into one euphorically danceable set, which never takes itself too seriously – their airing of Technotronic’s Pump Up The Jam a (welcome) case in point.

Halfway through the set a large message appears on the screen behind the DJs and the vast amounts of electronic hardware, reading GLA LOVE TO MCR. Jackmaster takes the mic, to deliver a raspy-voiced message of love and solidarity to the city affected by the Ariana Grande concert shooting. It’s heartfelt and heart-warming, and the rest of the set passes in a mad blur of happy dancing people, defiant and united by the music.