Glasgow producer and graphic designer Konx-om-Pax talks us through some of the music and art that influenced his new album, Ways of Seeing

On his latest album Ways of Seeing, Tom Scholefield, aka Konx-om-Pax, brings together the sounds of two cities, drawing influence from his hometown of Glasgow and his current home of Berlin, following a recent move to the German capital.

With his recent move has also come a fresh approach to making music, gravitating towards warmer sounds and, in turn, producing a much more danceable record. There's lots of collaboration on the new record too, as Scholefield teams up with fellow Berlin resident Silvia Kastel on Säule Acid, while Glasgow-based DJ and producer Nightwave lends vocals to I’m for Real.

Scholefield also worked with Glasgow-born producer Ross Birchard, better known as Hudson Mohawke, on the album’s lead single LA Melody, developed at Birchard’s LA home. Of the track, Scholefield says: “I generally write music alone, but being around other producers gave me a certain excited energy that reminded me of after-parties back in Glasgow where Ross and myself spent our youth together."

Along with the lead single, Scholefield also released an accompanying trailer for the album incorporating his distinct visual style. With his artistic influences rooted in visuals as well as music, Scholefield tells us about some of the tracks and artworks that influenced his new album, and those that have influenced him throughout his career.

Out of all the amazing material Drexciya have made this has to be my favourite. It’s definitely the main inspiration behind I’m For Real on my album.

Sleep and Om are a couple of my favourite bands; super slow and heavy as hell. Om asked me to support them in Glasgow a few years ago. I’ll never forget Al Cisneros complimenting me on my bass sound and passing me the blunt after I played. They’re such an amazing live band that induce a trance-like state of mind.

Martyn from LuckyMe put me onto a lot of the mid-90s Memphis rap material. I love how brutal and lo-fi it all sounds compared to the super polished modern stuff. Legowelt’s Memphis Rap mixtapes are highly recommended for people that want to hear more.

This is what it sounds like when you reach the gates of techno heaven. When I was recording the album I was listening to tonnes of Regis and Surgeon. I love the feel of their stuff but wanted to add more melodic elements to their basic techno framework.

Big fan of everything on Chain Reaction but his material stands out more because of the melancholic emotional elements. This track is simply beautiful to listen to.

Beksiński was a Polish surrealist painter who was sometimes called the Polish HR Giger and it’s easy to see why. His paintings sit somewhere between Dali and Giger, and in general are pure nightmare fuel.

Kirby makes some of the most tripped-out images you’ll ever see. I love the colour palette he used in this series.

Jake & Dinos Chapman – The Sum of All Evil

I was looking at the Chapman Brothers' work a lot when I was designing my album cover. I’ve always been interested in miniature set designs and diorama pieces you see in museums. There’s something deeply disturbing about their work and the level of details make it even more horrifying.

Undoubtedly one of the biggest visual inspirations for me for over a decade. There’s a subtle Akira reference in my album cover actually. I’ve been lucky enough to have been working with Koji Morimoto recently on a project with Kode9. He was one the animators on Akira back in the 80s.

I was probably introduced to Giger’s work at far too young an age via Aliens action figures. His biomechanic style of work has haunted my dreams since I was a child. Alien and Aliens have to be some of my favourite films to watch on repeat. 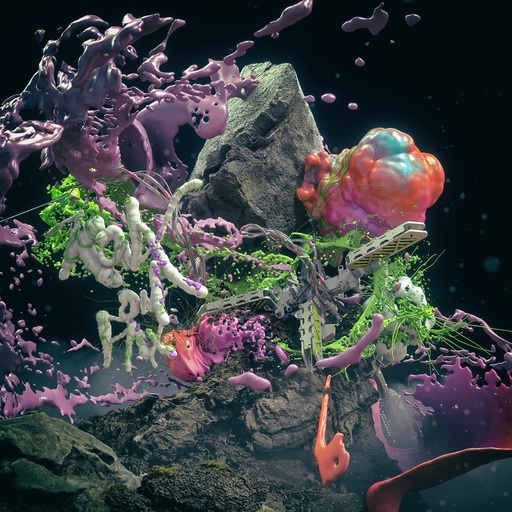