The impact of human existence on our planet is reaching its tipping point. Rebecca Tamás, whose new essay collection considers this era, ponders the true complexities of the relationship between the human and nonhuman

We are living through the age of the Anthropocene. Its traces are found throughout our planet’s geological and ecological systems: corals calcifying in oceans made acidic by increasing carbon dioxide levels in the air, non-degradable technological fragments embedded in the strata of our rocks. Defined as the period in which the Earth’s systems became irreversibly impacted by human existence on the planet, this has come to indicate not only our current geological age, but, for many living fearfully in its wake, the beginning of the end.

Rebecca Tamás’ new essay collection Strangers: Essays on the Human and Nonhuman is, as the title suggests, intricately bound up with ideas of the Anthropocene. But for Tamás, understanding this time period means realising that the beginning lies much further back. "The history of that unequal relationship with the nonhuman, and in fact with other humans, is much older," Tamás stresses, adding that it was Kathryn Yusoff’s A Billion Black Anthropocenes or None that helped her understand the ways in which the exploitation of marginalised people and the environment have always gone hand in hand. "She talks about the fact that industrialisation begins with the Atlantic slave trade, rather than with factories being put up in Britain, for example. It's really important for us to recognise the length of that journey."

For Tamás, reckoning with the full significance of this age and the concomitant environmental crisis requires this unflinching examination of the ideologies that underpin our society, of the ways in which inequality is manufactured and nurtured in order to make the vulnerable – both human or nonhuman – easily exploitable.

"It's not as if we lived in perfect harmony with each other and with the nonhuman world before the Anthropocene," Tamás emphasises. "We need to recognise that inequality in human society and inequality with the nonhuman are wrapped up in the same system of thought. Because it is people from the global south, working-class people who suffer the ravages of climate change. It's important to recognise that an attack on the environment, an ignoring of the crisis that we're in, is also an attack on and ignoring of the needs of millions of marginalized people around the world." 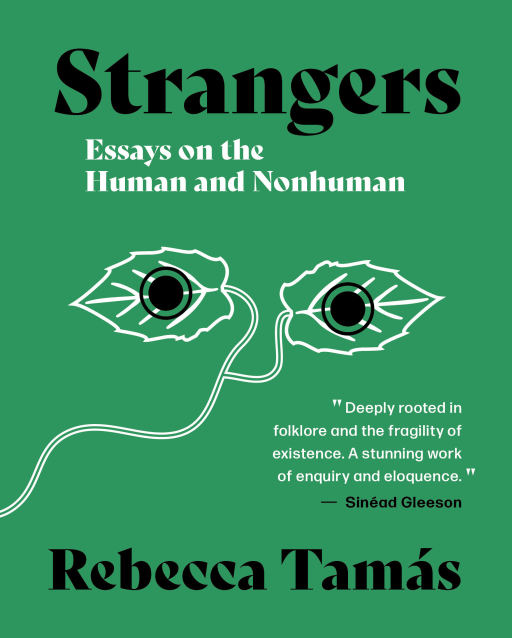 Her essays, lyrical and aching despite – or perhaps because of – their troubling subject matter, explore both where such extremes of inequality can take us, and how they might, even now, still be avoided. "I have an obsession with the film The Day After Tomorrow,” Tamás laughs wryly.  “The story is represented purely through a Western viewpoint. And the entire thing happens in about ten minutes, climate change just happens. And oh no! It's bad! Some people survive! And that's the end. It's so much simpler than the reality, which is that it will be a slow crisis that affects the worse off and is already affecting the worse off." Indeed by 2050, Strangers tells us, there will be 200 million climate refugees.

"I really do believe that part of the reason that you see an obsession, or a re-inspired obsession, with borders in the US and in Britain is a subconscious relationship with the knowledge of climate change," Tamás sighs. "I think people are very aware that the first big change that will come from climate crisis is the movement of people."

What can be done in the face of so much fear and looming grief? The answer, according to Tamás, is both utterly simple and overwhelmingly monumental: it requires understanding, truly understanding, the nonhuman world as something that has a right to exist, simply because it is alive. "I think until we can overturn that use-value obsession in which everything has to have a clear benefit to us, we will really struggle to deal with the environmental crisis that we find ourselves in.

"I think it's really important to recognise that the nonhuman is not just a backdrop, comforting because of its beauty or peacefulness. The environments that we interact with are alive: they have a particular experience of the world, a particular attitude, a particular way of moving."

By acknowledging the intrinsic worth and latent agency of nature, Tamás believes wholeheartedly that we might shift not only impending environmental disaster, but the violent ways in which we behave towards ourselves and each other under capitalism’s exploitation.

"When we think about that collapse of boundaries [between the human and nonhuman], it changes how we see the human simply because it encourages us to recognise that we are also part of the natural world," Tamás explains keenly. "And it also – I think – frees us from some of the more rigid structures [that dictate] what a human being needs to succeed, to matter, to have value. There is a joyful opening that comes from recognising those porous boundaries."

Strangers is out now from Makina Books