"My art can be enough": Douglas Stuart on Young Mungo

Douglas Stuart was the second ever Scot to win the Booker Prize, with his debut novel Shuggie Bain taking the book world by storm. We catch up with him ahead of his second novel, Young Mungo, and his first book tour of the UK

You may think you know the writer Douglas Stuart, but you most likely don’t. Not really. Stuart, a former creative director in the fast-paced world of fashion, now a Booker Prize-winning novelist, has found freedom in rejecting any pigeonholing that might have come with his monumental past few years. Stuart is only the second Scottish author to win the Booker Prize in its 51-year history (after James Kelman) with his debut Shuggie Bain, a novel that follows a young man’s relationship with his mother as their family navigate life on a Glaswegian council estate.

From his New York apartment, I speak with Stuart over Zoom while I myself am not far from the very city that has shaped much of his early writing. While fans may revere Stuart for his effort in shining a light on marginalised stories, he is not to be mistaken for his widely acclaimed characters; specifically, his debut novel’s portrayal of queer, working class Scottish life during the Thatcher years. He is now ready to make clear that his life’s experiences are his and his alone. “I reject all pressure to be a representative for something,” he says. “My art can be enough. This is the story that I am telling.”

“I can't say to you I was the kid that grew up sort of journaling or writing poems or disappearing into the world in that way,” Stuart continues. “But I always had an imagination that was really restless because I was a lonely kid. I was suffering, both with addiction at home and poverty. Then when I was going on the streets, I was queer, and so a lot of the other young boys and men didn't quite know what to do with me. I didn't know how to fit into that world that I was in.”

That notion of fitting in as a young queer man is something threaded in both Shuggie Bain and Young Mungo, his sophomore effort. Both novels feature central characters who are coming to terms with their sexuality in the middle of communities that constantly deride them for being soft, effeminate, unathletic.

As Stuart alludes to in both novels, the other male characters are often at a loss with how to interact with the young men. Shuggie’s mother tries to get her neighbour to take the boy out on a fishing trip, much to his horror. Still, Shuggie digs deep inside himself to find the courage to go only to then be left behind by the older man and his young sons. Mungo’s older brother Hamish struggles to connect with him, fearing that their lack of father has made Mungo weak. He eventually forces his younger brother to take part in a sectarian clash so that Mungo can prove his manhood. Such violence goes against Mungo’s very nature and ultimately leads to unimaginable consequences.

While Young Mungo may share many characteristics to Stuart’s debut (the city of Glasgow, poverty and addiction), it is largely a departure, following the slow burning romance of Mungo, a Protestant teenager, and James, a Catholic school-leaver, one year his senior, who are navigating the start of manhood against a backdrop of violent toxic masculinity.

Mungo is a quiet, gullible young man who sits in the shadows of his gang leader brother, Hamish, and academically gifted sister, Jodie. He is constantly told what to do, how to think, how to act, but it is not until he meets James that he realises he can simply be himself.

What is so moving about Young Mungo is how it unfurls its main character’s sexual awakening, set in the 1990s during the years of Section 28 when queer visibility or LGBT allyship were not a part of mainstream culture or society. Reading it serves as a reminder of just how harrowing a journey coming out can be even to this day. For Mungo, all he knows of being gay is that it will make him a pariah in his community, a further target for homophobic vitriol. He has learned to quell any desire for other boys until he meets another outsider in the form of James. 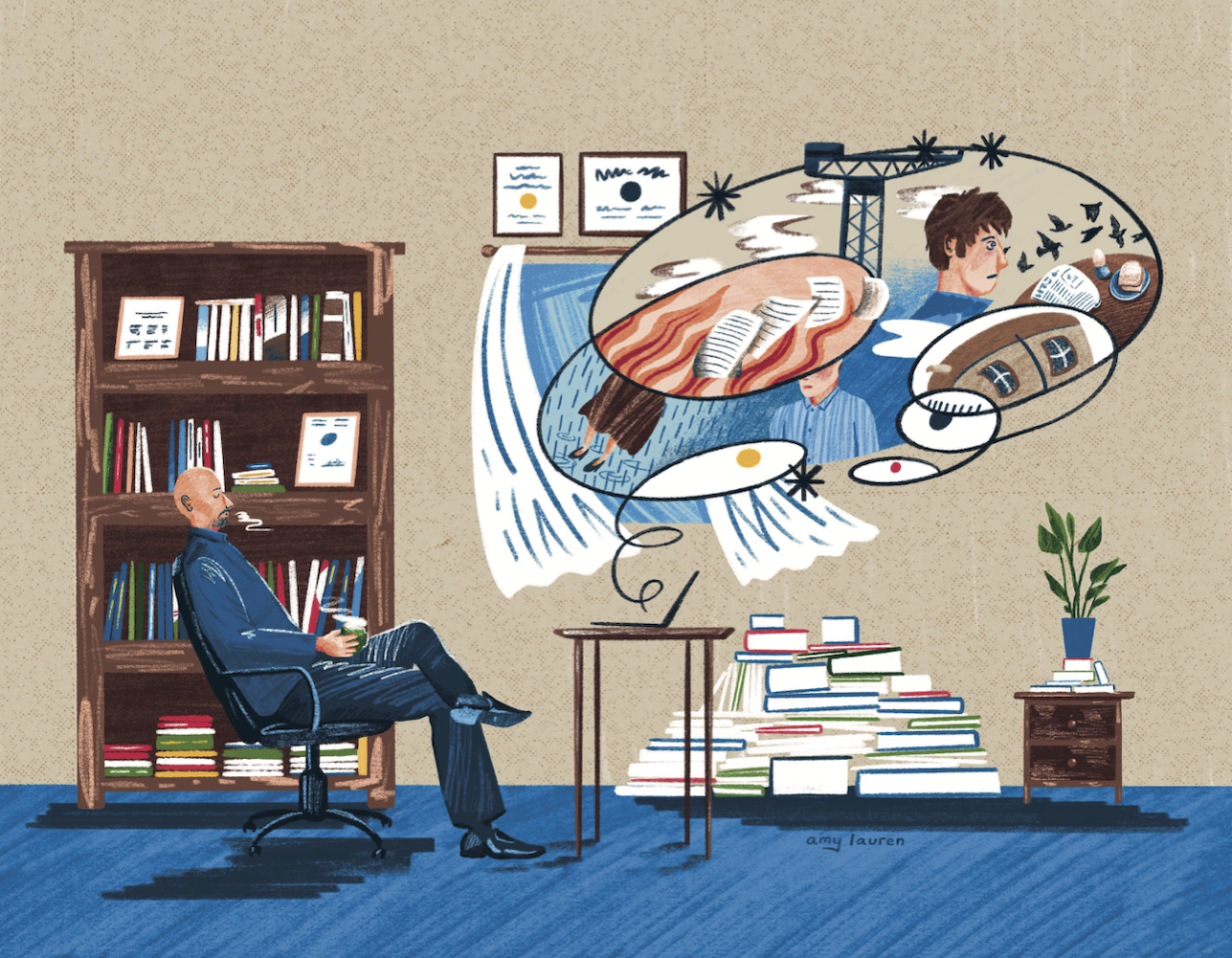 That isolation is not unfamiliar to Stuart, though he notes his youth differs from the era of social media in which young people might more easily find community or visible queerness online even if their home life is not as accepting. “There has to be an easing of loneliness when you can just see someone, even if they're in Venezuela, or Argentina, or no matter where they are in the world. It can be geographically a billion miles away from you, but you know that there's other stars in the firmament. You know that they're out there, somewhere, and they like the same things as you.”

Like many LGBTQ people who did not grow up during the dawn of social media, I too struggled to find examples of queerness, especially examples of queer people thriving, happy, and at peace. The need for this visibility is something Stuart emphasises throughout the relationship Mungo shares with James. Both young men are paramount in shaping their understanding of same-sex love and desire.

While much of the story is centred on its two star-crossed lovers, it is violent, harrowing, and at times difficult to read. There is a real sense that Mungo and his neighbours will never escape their estate and instead must learn to survive. Filled with scenes of sexual assault, sectarian violence, and visceral depictions of addiction, Young Mungo is painful but powerful for how it explores young love and sexuality. Against all odds, it feels powerful that Mungo can maintain a friendship with James, even as the communities around them are at odds with each other.

Stuart acknowledges that he might always need to explore the pain that colours much of his writing. “Thematically, I am still getting my hands around some pain, or some hurt, or some really big themes that will haunt me, I think, for my entire writing life.”

Manhood is another important theme, especially the shaping of gay men in a world in which the quintessential male is a violent, disenfranchised heterosexual. “You know Mungo loves his mother, but the mother is not the focus of [Young Mungo] at all. This is about his love for himself, discovering himself, and with James as well, but really what it means to become a man.” It was important to write Mungo in that way, he says, against a backdrop of performative toxic masculinity “especially because he's a very tender and a very gentle boy, and sometimes tenderness or being gentle or being kind can be seen as a weakness for men.”

As we speak ahead of his first major UK book tour, I can’t help but note how his rise in the literary world happened during a time in which our collective worlds grew smaller and many of us turned to books and TV as a portal into other worlds. As the world began to bunker down during the early days of deepest, darkest lockdown, his 2020 debut Shuggie Bain became something of a zeitgeist for booklovers and literary awards alike. Published just a month before most countries began to close their borders, Stuart is now only just getting to meet his fans during a packed publicity run for his sensational follow-up.

“Shuggie doesn't intend to speak for every single working-class family in Glasgow,” notes Stuart, on the pressure of portraying Scotland, specifically a grittier, unglamorous Glasgow, ahead of his imminent return. “It speaks for the working class family I created and that is it. But there are many people who survived under the Thatcher years and who flourished and who had great lives. There's probably young queer people who grew up in the 90s in Glasgow who had a great time that lived on the other side of the city. There’s room for every kind of story, and so I reject all pressure to be a representative for something.”

Perhaps this is what all writers deserve, the ability to transcend both expectation and the self and to write into the unknown. For Douglas Stuart, writing about Glasgow and its gallus denizens was a way to work through the very things that weighed heavily on him decades after emigrating from Scotland. But his acute ability to depict the daily struggles of the human experience no doubt means wherever he chooses to write into next will give his readers even more insight into what it means to survive and exist in all one’s multitudes. Undoubtedly, his art will indeed be enough.

You can see Douglas Stuart at the following events across April: