There is no ‘universal’ immigrant story. It’s an idea that The Good Immigrant USA, a sibling of sorts to the breakthrough collection The Good Immigrant, reflects, resulting in a searing, defiant anthology of essays navigating race, identity and immigration in a country that increasingly devalues and dehumanises black and brown people.

Fatima Farheen Mirza writes about the everyday experience of being Muslim in Trump’s America; Yann Demange writes about the identity crisis and erasure that comes with being a mixed race Londoner, with brown skin, a French name, and a London accent; Chigozie Obioma writes about the contradiction between the America he saw from Nigeria and the America he experiences as a Nigerian immigrant. The essays in the collection are absolutely vital to the times that we are living in, and demonstrate the importance of platforming voices that speak truth to power.

“It just made sense to do it,” Chimene Suleyman says. “When the UK edition of The Good Immigrant came out, none of us expected it to do as well as it did. We started to see that it was shaping something. It sort of went beyond being a book, and it did start to affect how people in publishing started to view representation and lend itself to a wider discourse in Britain. It stopped feeling like a singular anthology. The parallels between how things are playing out between British politics and American politics aren’t vastly dissimilar. It just made sense to keep expanding these voices – if I could do one in every country, I would.”

Suleyman, who co-edits the anthology alongside Nikesh Shukla, wrote for both the UK and US editions. Her initial essay considered the rejection she felt in England, despite being born and raised here, while her American counterpart explores the experience of living in America and not being treated as a Turkish Muslim woman, but as a white English woman. “For the first time in my life I was being treated with a level of privilege that I didn’t really experience in England. Writing the American piece was less painful for me,” she explains, “because I didn’t feel like I was disowned by my home. I know this isn’t my home in the same way that London is so I was just more interested by the fact that race here isn’t that nuanced in a lot of ways. There’s a different relationship with race and immigration ever so slightly. I come out here and I tell people I’m Turkish and they’re like ‘Oh, what part of England?’

“They can’t get past the accent. It’s the same thing of pre-conceived ideas people have based on how you dress or how you speak. There’s this very distinct idea of what a Middle Eastern person is out here and they’re running bodegas or selling you kebabs or whatever. But if you present as someone with an English accent and you have tattoos, then there’s no way you can be Middle Eastern, there’s no way you can be Muslim for them. Because you’re not fitting the stereotype that they’ve been told time and again that Muslims only wear hijabs and they hate the West and they’re all terrorist supporters – and when you don’t fit that framework, like most people don’t, they don’t know what to do with it.” 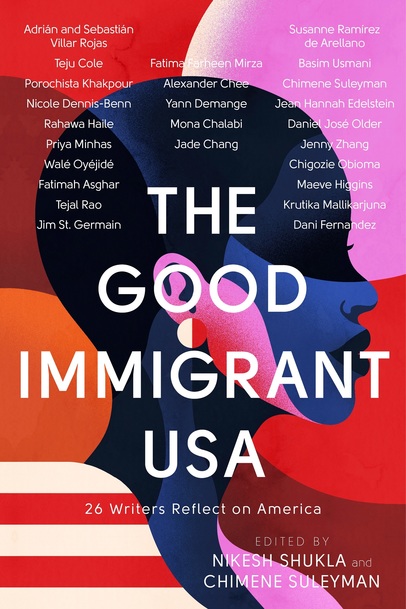 The Good Immigrant USA challenges these assumptions directly, and hits back at a political and social hierarchy that assigns privilege to a select few. As Suleyman talks about the privilege she experiences in the US, being regarded as ‘one of the good ones’, Maeve Higgins writes about the experience of being an undocumented Irish immigrant before 9/11, and feeling very little anxiety about her status. “Maeve’s piece was really incredible because it gave some insight into the fact that there was no fear – and that’s something that’s constantly instilled into brown and black people, to always be fearful. White people have never had to worry about overstepping boundaries,” Suleyman says, comparing Higgins’ piece with the experience of 21 Savage, who having overstayed his visa as a young child, faces risk of deportation.

“It’s really interesting because I read one of the statements from one of his lawyers who actually referred to him as ‘one of the good ones’, like ‘isn’t this what you want immigrants to be doing? He’s a successful one’. I understand that narrative, I understand that its well-intentioned but it’s also dangerous. Because where do you draw the line? If you’re constantly looking for who is allowed in and who isn’t and what is good and what is bad, if everything becomes that binary then they’ll keep pushing those parameters of what makes you good and what makes you allowed to stay – until virtually no one can move or travel, which is essentially where we’re at. British and American politics and a lot of Europe is essentially saying that they really don’t want anybody.”

A triumph of the collection is that it’s not trying to appeal to the white gaze, or explain or validate itself to people who aren’t affected by immigration. “We constantly, even when we’re trying to say positive things about immigrants, centre the white experience. If you truly have any respect for immigrants and see them as people, you would not put yourselves at the centre of their experience. You would just let them be,” says Suleyman. “During the Brexit campaign, the Remain side irritated me as much as the Leave campaign, because when it focused on immigration, it was still incredibly misguided and condescending. There was still this idea of, ‘What would we do without all the immigrants working for the NHS, immigration is wonderful, look at all these exotic, colourful things that have enriched our lives.’ They’re still prioritising themselves in the immigrant experience and basically saying that they have a use for immigrants. It shouldn’t matter whether immigrants serve your life or not – just let them be, and let them live in their homes with the people that they love, in the streets that have become theirs.”

The Good Immigrant shifted the narrative around race and representation, adding nuance and compassion to conversations around immigration. Suleyman hopes that The Good Immigrant USA does the same thing, but more importantly, she hopes that the collection will reach people who feel othered and alone. “I want the book to comfort people and to hopefully be the beginning of a much wider discussion about not who immigrants are, but about how we need a space to tell our own stories and not be spoken for all the time.

"I’m not looking to convince people of who is a good immigrant and who is a bad immigrant, or what immigration means. I’m not out here to convince you of my worth or anyone else’s worth. I just want the people who felt so marginalised and so alienated to not feel alone and start to feel like there’s a space for them to tell their own stories and live their own lives the way that they want to. That’s the narrative I want.”