Bryan Washington on memorials for our communities

Bryan Washington discusses his debut novel Memorial, a deep and multi-layered look at the lives and relationships of two queer men of colour in the USA

In Memorial, Bryan Washington’s debut novel, relationships are explored in all their many shades, coloured by their ups and downs. He is not interested in depicting a life of clean, neat order. Instead, he looks to unpack the "creases in-between certain relationships", whether it's fractured father-son dynamics, love nearing its end, or the relationships we have with home cities and the memories they carry of former lives we have lived. All is fair game in this powerful debut.

Memorial follows the relationship of Mike, a Japanese-American working as a chef in a Mexican restaurant, and his boyfriend Benson, a Black daycare teacher. Mike announces he is off to Osaka to spend time with his dying father, while his mother Mitsuko is due to arrive in a few short hours from Tokyo. Benson quickly realises he is being left alone with his boyfriend’s mother, having to reconcile what has happened to the love both men once shared.

What is most compelling is how the novel foregrounds its marginalised characters in a way that focuses on the small everyday moments of their relationships and not the traumas that each carries. Speaking with Washington over Zoom, he carefully considers the process of "trying to find which of those moments go into being representative of a larger whole of the relationship."

As a reader, I have never come across a novel which feels so authentic in its diverse representation and am keen to explore his brilliant multicultural cast of characters. "For me, at least," begins Washington, "when it comes to reading contemporary American fiction featuring characters from marginalised communities, autonomy for a character to make their own decisions – and not only to make those decisions, but to make mistakes and to grow, or to not grow, or to approach one another from a position of affection, or position of love – often just isn’t given to those characters. Whether by way of their queerness or by way of them being an ethnic or racial minority." His novel is a direct response to that lack of nuance rarely afforded to queer men of colour.

How Mike and Benson, and their subsequent sexual relationships, are represented is particularly vital to him. Especially how his characters are talked about in wider discourse. "It was deeply important to me to read texts in which a queer relationship was painted in a way that [the couple] were given that grace and room to grow or not to grow, and partly, I think a lot of it’s that many [of those] in fiction don’t view queer characters as people, which is to say people that are full of multitudes." 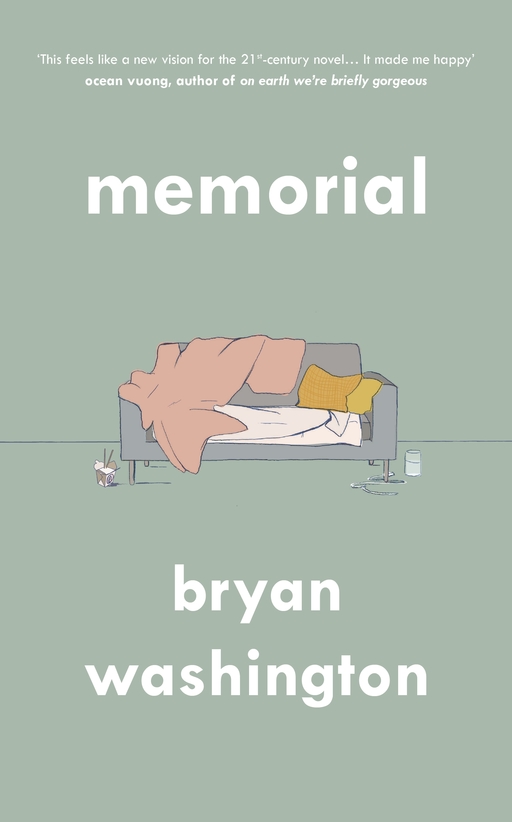 Soon our discussion focuses on how memory is used throughout Memorial. Be that the memory of a romantic relationship nearing its end, or how both men remember their childhoods, how their parents initially accepted or rejected them when coming out. I am interested in the lens through which Mike and Benson contend with death, family, and fractured romance. For Washington, the idea of 'family' was woven into the very DNA of his novel. "What does family look like for a cis queer person of colour in the States right now? And not only what does family look like in the present tense, but what does family look like in the future?" He pushes further, asking, "What models are there? You know, what roadmaps are there? And at least, from my specific vantage point, there aren’t a hell of a lot."

He wanted Mike and Benson to actively reckon with their own futures, not only as a couple but their lives beyond the present day: "What is a life, or what is a relationship, but what is remembered of it?"

"It’s seldom for me to see a narrative in contemporary literary fiction featuring queer folks where the characters are alluding to life generations down the line," he offers up thoughtfully. Washington himself has begun to reckon with the lack of queer elders of colour he and his peers can seek advice from, acknowledging the state violence, intergenerational trauma, and systemic oppression that has left generations of queer Black and other marginalised people without that ancestral wisdom or guidance.

As Washington emphasises throughout our conversation, there is a need for queer people of colour to create memorials for their own communities, because they deserve that guidance, that love, the wisdom to help lead them on.

For me, knowing that a book like Memorial exists in this world gives me hope. The representation it provides through its rich characters, fully flawed but full of kindness, is so important. But more important is the gift Washington has given countless readers, the ones who will feel seen within its pages and go on to use it as a roadmap to make sense of all the creases and bends of a life unfolding.

Memorial is out now via Atlantic Books
atlantic-books.co.uk