“We had no idea at the time, but this was where the end began…” So opens Val McDermid and Kathryn Briggs' graphic novel from Northumberland, where for one weekend 150,000 people descend for the Solstice Festival. ‘The end’ is a bug dismissed as food poisoning that instead takes the world down at an alarming rate.

Sounds familiar, though it’s a tale whose life began years prior, making it eerily prescient. Briggs’ monochrome palate aptly captures the impending darkness, enveloping a vast array of disaster, and even vaster array of emotions, in an artful visual articulation. We track the root of contamination, follow scientists hunting a cure as the disease becomes increasingly resistant to antibiotics, and root for protagonist Zoe Meadows – a journalist determined to share the truth no matter the cost.

It’s a bleak graphic novel, complex on blame, grief, accountability, survival and rebuilding. Though evidently well researched, it’s quite text heavy for expectations, but remains a shrewd and heart-racing exploration of the trajectory of catastrophe.

When reading of pandemics during pandemics, the reader waits for the turning point from the darkness, as we do while sitting through our own. Instead of light, Resistance spirals continuously. Maybe it’s our own search for a finite endpoint that enhances the discomfort and tension, but in true apocalyptic fiction fashion, sometimes you can give everything, and still lose it all. An unsettling and realistic thriller. 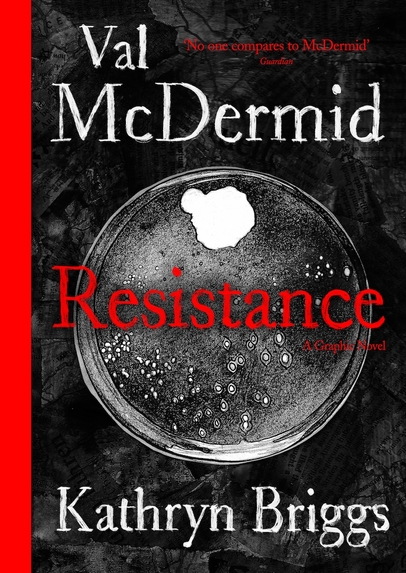