On entering Tramway, there’s an ambient soundtrack playing. There are bird noises, but also synthetic sounds. This combination of the known and familiar with futuristic and uncanny elements is a recurrent methodology through Rajni Perera’s visionary paintings and sculptures.

Compositionally, the paintings refer to classical portraiture, taking their cue in places from Indian miniatures. The people of colour she paints wear traditional-looking South Asian garments but they may also have four to six eyes, or a bottom lip that extends into something like a petal. The carefully rendered patterns show existent styles of floral fabric. Nevertheless, the layering of flat patterns is built up in a way that gives a psychedelic sense of multidimensionality.

Taking on a further degree of relevance this year, Perera’s 2019 sculptures of face masks combine traditional South Asian textile decoration of folds, beading and weaving with branded 3M filters embedded. Other sculptures render in 3D form the kinds of figures seen in the paintings in large scale. 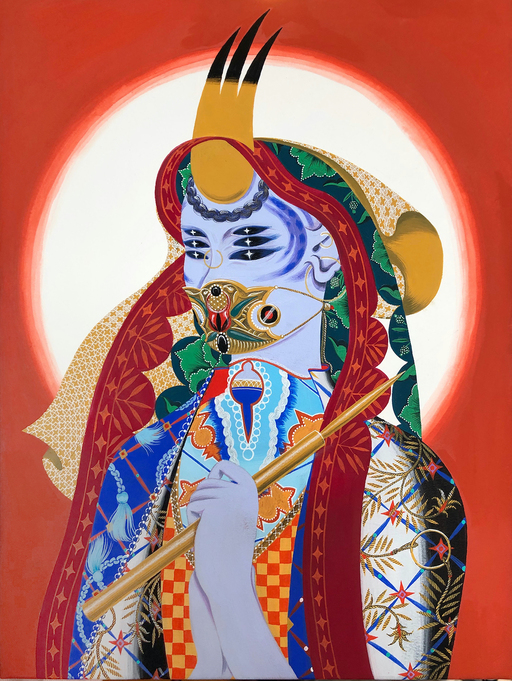 With the titles of works referring to Ancestors, Travellers and Sentinels, alongside the dramatic costume, there’s a suggestion of a society with recognisable patterns of culture-making through ornament and shared symbologies. For example, one exquisite detail of a painting shows an eagle amulet balanced or hovering over the head of Traveller. This second layer of motifs follow the kind of patient world building that marks out the best instances of sci-fi and fantasy; the visual equivalent of creating a dictionary of Elvish or Klingon.

Perera’s exquisitely-made paintings are representations of a future that’s not often seen, where BIPOC bodies, histories and traditions are adorned, beautiful, and protagonists in a new and as yet unintelligible form of society.