deep dive (pause) uncoiling memory begins with a large gate-like metal sculpture that reads: 'WHAT LIES BELOW'. The words are carefully rendered into one of several deep, green grates. The ambiguous wording can be read as a question or a statement, and it forms the introduction for Alberta Whittle’s emotional, intellectual and spiritual excavation of the social structures of anti-Blackness.

The exhibition unfolds around and upon these gates, and they also serve to introduce elements of the architectural character of Venice into the gallery space. As they are metaphorically unfixed from hinges and doorways around the city, the bespoke fabricated gates still operate as boundaries, but they are now freestanding and easy to circumnavigate. The psychic effect is to create a space with prescribed points of flow, but still left as open as possible.

On the first grate after the entrance on the left, there is a tapestry that depicts graphically rendered arms that weave in and out of each other and lead to snake-tails at their ends. Images of diamond-shaped jewels are woven into the tapestry as decorations for these thick and wriggling arms. The hands are more cartoonish than they are anatomical. They appear liquid, like splatters, or like graphic renderings of steam. Titled Entanglement is more than blood, this poetic phrase underlines the work as a symbol of complicated connection.

Behind the grate there is a painting from 1987 by Whittle’s mother, Janice Whittle, of her daughter Alberta sleeping as a child.  A tenderness is extended through the painterly communication of intimacy, warmth and love. Whittle’s silhouette is carefully picked out as the centre of the work. Her mother describes an environment around her of warmth and fullness through thickly painted brushstrokes: a wish for her own child’s wellbeing, and a vision of the way the child’s spirit radiates around her. The mustardy ochres of the domestic-scaled painting complement the densely pigmented purple of the gallery that is at points deep, lustrous, plush, regal, and satiny.

To the right of the painting of Alberta as a child is one of the many small and satisfying details around the exhibition: a tiny stool carved all over with a long snake. This motif occurs not only here, but in the previously-discussed tapestry and throughout the film in the second gallery space. So it is that the snake is able to slink, bend and twist between the different dimensions and elements of the installation. Cowrie shells have been cast on the snake stool, and seven are clustered together, all mouth side up. With these shells on the surface, the stool is charged with the suggestion of divination. The carved wooden stool seems holy next to the image of the sleeping babe, a soft reminder of church kneelers. 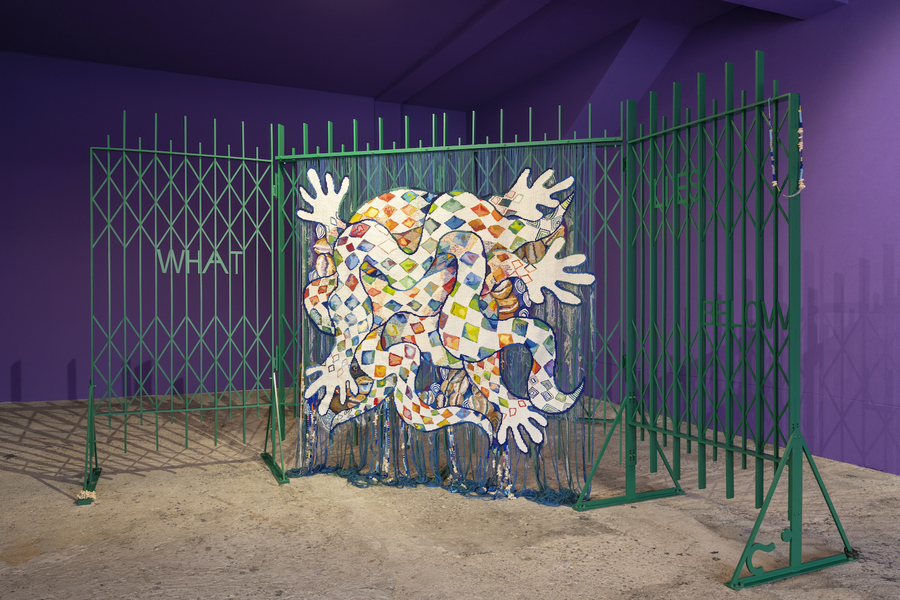 The recurring symbol of the snake is further elaborated by the video next door in the second gallery, titled Lagareh, meaning 'The Last Born'. Like the installation, the film work fuses myriad emotional registers through different audio and visual textures. Lagareh takes place over seven chapters, named after the days in the week. They lead to Sunday’s emotional climax.

In the first part, Monday, a woman dances with a bright yellow snake. On-screen text says that Solariss (the dancing woman) lays libations for Mami Wata. Solariss pours rum on her feet, her wrists are laden with beads and shells, and her long, thick hair is bejewelled in gold and bends in loose curls. She sways, looking down sometimes, then beyond the gaze of the camera. All of this takes place in the courtyard of an ornate and colonial-style institutional building, whose perfect rows of windows and huge central statue are seen blurred in the background.

After this intriguing and enchanting opening, the second part, Tuesday, then moves to domestic comfort in an ethereal documentary setup. Two Black, queer women chat to each other and Alberta (off-camera) about some of the legal recognition that was given to them by marrying one another, and they imagine their future parenting style when they have a baby. Softly, the lens blurs in and out of focus following the hands of Angela as she massages her partner Ama’s feet.

Wednesday sees dancer Divine Tasinda move in vigorous, fluid gestures and swoops as she holds two knives: one rusted, one still bright. Her dance under blue skies is punctuated by bright portraits of Divine herself and two of her family members. The filmic portraits of the three Black women glow in their beauty, and form the powerful counterpoint to the violence that is represented by the colonial architecture of their backdrop: Oswald’s Temple, set within an estate formerly owned by a Scottish slave trader. Some of this disturbing history is brought into the present through mobile recordings of police violence. At the same time, Whittle’s poignant poetry describes the felt effects of state-sanctioned oppression, and how to resist the mechanics of domination.

Thursday is narrated by Dr Isatu Smith, who tells the story of the unmarked graveyard on Bunce Island on the Sierra Leone River. Ground-penetrating radar recently revealed a hidden cemetery next to where the white Europeans are buried with tombstones and ornaments. At this point the film becomes more analytical, relaying Dr Smith’s dialogue about the horrific treatment of people forced into slavery. A drone camera surveys the land. One final note for Thursday comes on the screen: ‘Remember the dead are always with you.’ Thinking of the steel sculptures that frame the video, perhaps the Xs that decorate them are also the mark left in place of a signature for all those who are present but whose names have been ‘buried alive’.

Friday shows scenes of four Black women holding the line, symbolised by a long piece of red fabric against the blaring wind. This is shot like an epic battle, showing these women at the vanguard, while Whittle demands that the audience withdraw their consent to police power: ‘Premature death at the hands of the state MUST END!’ The pace of the film builds to a stirring climax as the audience is invited to ‘invest in love’, and deconstruct the violence and surveillance of incarceration and police power. For Saturday, Alberta reads out her poem, Looking the Snare in the Eye, while different imageries from the previous days recur. The poem is an embodied and emotional remembrance of ancestors and a wish for transformation through observation, sensitivity and breaking the cultural amnesia that allows for horrific injustices to be ignored and forgotten. 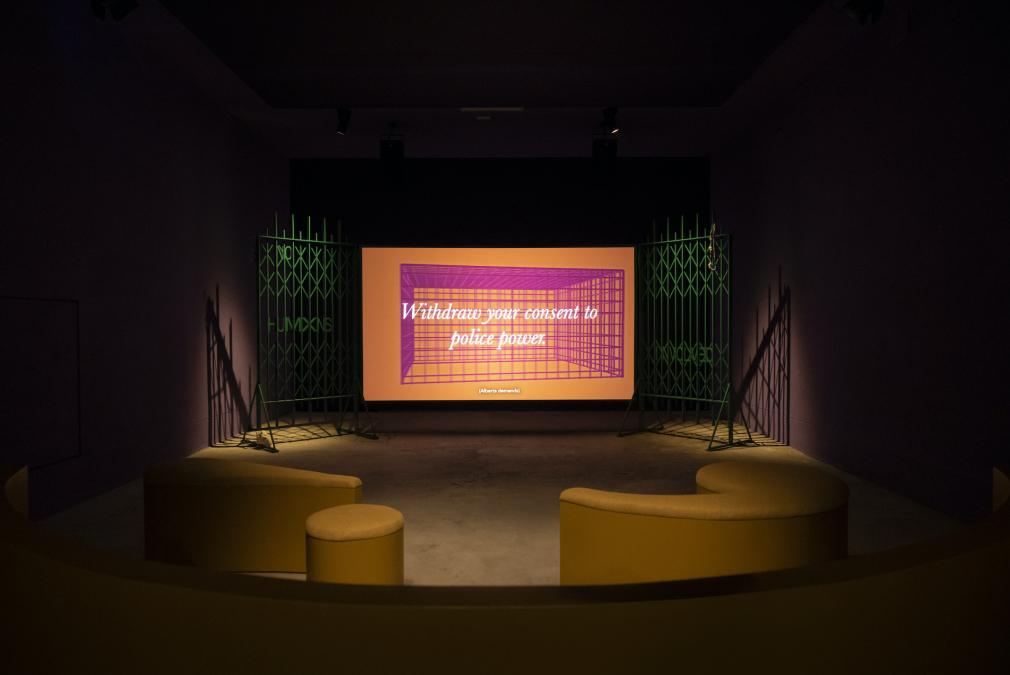 This leads to the final chapter, Sunday. In a courthouse, the singer Kumba Kuyateh tells the story of Sheku Bayoh and his family. The film is dedicated to Bayoh, who died in police custody after the injustices inflicted by the police in Kirkcaldy in 2015. Kuyateh’s voice rings with fondness as she sings the epic tale of the Bayoh family travelling from Sierra Leone. The song is in the Mandinka language, but Kuyateh’s cadence and powerful vocals convey hope and heartbreak in equal measure. As the final visual of the film, Kuyateh holds our gaze for what seems like over a minute of silence.

The closing section is text on a black screen. A list of names appear, one by one, of Black people who have died due to police violence in the UK. Whittle’s voice reads them out each in turn; the pain audible in her voice. Just before she begins, she reminds us ‘that we must recognise [these names] with love. That they were once someone’s baby, someone’s little one. Someone’s cherished darling.’ Whittle’s voice wavers at this, exerting the full combined emotional and intellectual weight of the film.

Throughout deep dive (pause) uncoiling memory, Alberta Whittle practises powerful resistance to social repression and the oppressions of anti-Blackness and state violence. With great care and a singular sense of purpose, Whittle reveals the terrifying stakes of social justice at the same time as she pronounces its beautiful possibilities: the radical expansion of love, and the true freedom that comes with systems of justice that are healing instead of lethal. A final reminder is emblazoned above the exit from the gallery: ‘Invest in love’.