Thulani Rachia on Glasgow, the slave trade and colonialism

In Thulani Rachia’s first solo exhibition of sugar and Bones, he has created an ambitious video installation, developed from his own footage of a building being slowly taken apart over a period of several weeks. This forms a concentrated response to the politics of collective memory. More specifically, the frequently effaced but central role Scotland has as a site of slave trade, and how this shapes the buildings, streets and monuments of the city.

Rachia’s work extends across from his time as a professional architect, as well as his years of training and practice as an artist and performer. On an intuitive level, the architecture of Glasgow has always been evocative for Rachia. “Arriving in Glasgow for the first time [from South Africa], never having been to the UK before, I connected with the imperial architecture.” He describes the ‘odd’ feeling that came with this sense of the built environment of the city centre feeling ‘familiar’. It was after some reflection that he realised the common factor: colonialism.

[A sidenote on the meaning of ‘colonialism’ and ‘colonisation’, a word that is often deliberately misunderstood. While the processes, structures and violences of colonisation are live and inform every dimension of personal relationships, cultural activity, mental health, social encounters and political decision-making, the terminology is only slowly coming into popular vocabulary. Colonialism can be understood on many levels. A first definition refers to the state-sponsored, racist and xenophobic brutality through which nations systematically kill and enslave (note: present tense) populations of other countries, in order to violently exploit the people and resources there. These invasions and genocides emerge from, and institutionally reinforce, racism and xenophobia by creating a system of value that allows certain people to be killed, imprisoned, enslaved, silenced, worthless.]

A key moment in Rachia’s introduction to Glasgow and its relationship with colonialism came during Black History Month. “One person recited a poem about Buchanan Street [named after Lord Buchanan, a tobacco merchant whose riches came directly from slave plantations]. I had seen street names like Jamaica Street and felt something was amiss about that.” After this event in Black History Month, for Rachia, "all these things started popping up in the city centre."

More research followed and with it a greater contextualisation of Rachia’s initial immediate sense of the architecture having a broader significance to him. “These buildings that signify wealth and institutions were made from the profits of the slave trade," Rachia says. "Architecture is one of the ways that history is perpetuated, maintained and made present today. It’s built material and form and it affects the way we experience the city.” 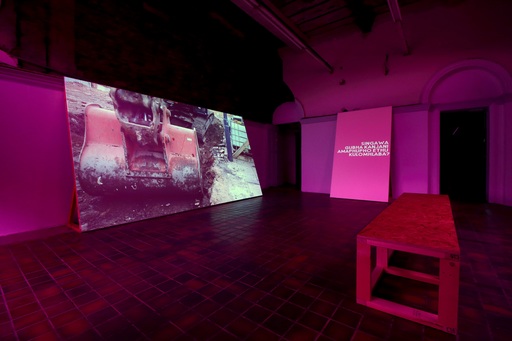 Hearing Rachia’s astute insights into the function of architecture, it’s easy to appreciate the years he spent training and working as a professional architect. It’s in this context that he became more conscious of the influence of architecture on the individual and society. That’s to say, the acute (but often unacknowledged) sensitivity of people to, for example, the shape, scale, materials, age, design, detail of the built environment, and how these factors can shape how a person may think of themselves, the places they live, work and visit, and the people around them.

“Obviously [buildings] are physical things, and [architecture exists in] the exterior world, but they have an effect on our interior and our psychology. When thinking about these two things, psychology and architecture, [architect and theorist] Juhani Pallasmaa has been a major influence since architecture school, [Pallasmaa] introduced me to the idea of phenomenology, … the senses and architecture. And [Pallasmaa has] been a guiding context in what I do.”

Which buildings are levelled and what stays standing is for Rachia a particularly charged judgement, and a point of intersection between two of the main ideas already discussed. First, how architecture affects those who live in and around it, and, second, the realities of colonialism and colonisation are not only not taught, but erased from general awareness in insidious ways. “When you’re thinking about this idea of urban renewal, how cities grow and what buildings remain, urban planners curate a certain experience within the city," Rachia says. "They choose which buildings are demolished. This brings up the idea of heritage and history. Whose histories and heritage are being prioritised? [This process is] also complicit within maintaining these narratives that the Empire chooses to maintain and prioritise. That’s the point at which I wanted to make an interjection. Since I’ve been here there has been a lot of urban renewal, gentrification of the South and East and with that comes again this idea of, what are we prioritising here? Who actually has access to the city?”

Rachia’s enquiries led him to Glasgow’s Merchant City, a part of the city that was deliberately mapped out and named during a recent rebranding of the area. In its reference to Merchants, it deliberately and uncritically resurrects the wealthy generation that profited directly from slavery and operated their businesses in the area. “When I decided I wanted to document the Merchant City, I felt that it wasn't about documenting the buildings that remain. I wanted to document the process of removing things. What is the process of erasure?”

For Rachia, this relates directly to “the colonial project, what it did and what it’s still doing.” As he explains, “when the colonial project went to the colonies and took over populations and lands, there was a systematic erasure of the indigenous cultural and spiritual practices, and that’s another way that Christianity plays a major role in that erasure of those indigenous practices. Even though Christianity went there with good intentions, what it ended up doing was assisting the colonial project in its takeover in many ways. Thinking back to that idea of erasure, I'm really interested in how that plays out in the urban scale, because that’s in the everyday. I wanted to highlight or slow it down in some way and in the work create a point of reflection on what's happening. To question what is being removed here and what is remembered.”

Rachia’s footage is his own; he is the camera person. While it might feel like a small point, this process of being present within the work takes on significance for him, and poignantly draws out another intersection of urban space and colonialism. “Thinking about the history of my homeland, South Africa, people like me were not permitted to travel outwith certain zones and areas within the country and had to carry about documentation which classified them racially and if they were in the cityscape, the urban space, they were allowed to be there if they were registered to work with someone. So for me to be able to actually permeate these boundaries in some way and to move, to document my body being there, I don’t take that freedom lightly. I’m conscious and aware of that, and how I can use that freedom. I’m always actively witnessing from that perspective and have that awareness.”

of sugar and Bones, Civic Room, Glasgow, until 3 Nov, free