Robert Diament on the Talk Art podcast's tour of Edinburgh

Launched just last October as something of a passion project, the Talk Art podcast has amassed a significant following during its two series. Featuring the initially unexpected pairing of actor Russell Tovey and gallerist Robert Diament, Talk Art is billed as a podcast about art and friendship with special guest interviews. It is an engaging, at times joyful, listen with the pair’s infectious enthusiasm for visual art offering a refreshingly straightforward take on the complexities of the art world.

The pair aim, fundamentally, to make contemporary art more accessible. Says Diament, “I just loved this idea of somehow breaking down the boundaries of elitism within the art world. Trying to show that you don’t have to have money to be into art, that a lot of museums and galleries are free to go to, and they are available for people to go and see.” He continues: “It’s about joining the conversation, realising that you can be part of that conversation. You don’t have to have all the knowledge, the weight of art history if you don’t know it yet. Your own responses and ideas are valid and important.”

This is borne out by their own experience. Both collectors, neither took an orthodox route into the art world. For Tovey, his interest was sparked by the Young British Artists, and he spent his first paycheck from The History Boys film on a Tracy Emin monoprint. Diament’s interest in art started as a teenager, running parallel to his first career in music. “When I was really young I was obsessed with Frida Kahlo. I read a book about her life before I saw any of her work, so it was very much narrative-led in a way. This idea that somehow, despite all our troubles we have in life, art and creativity could help people to survive and make something of their lives.” This connection is deeply personal – Diament lost his brother around this time, and Kahlo’s story offered some solace in his grief. “One of the things that kept me going was that idea of Frida Kahlo for some reason. Then I discovered what her works looked like, and from that point on I was completely obsessed with art; it led me into loads of other estuaries such as Tracy Emin and Louise Bourgeois, lots of other female artists.” 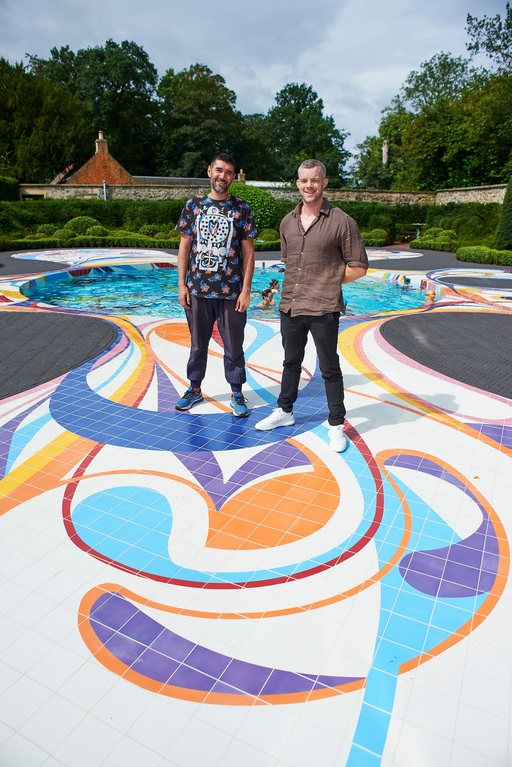 In his late 20s he retrained (at the instigation of Neil Tennant from the Pet Shop Boys, according to the podcast) doing a masters in History of Art before taking a job at Carl Freedman Gallery. Around ten years ago he met Russell Tovey at the National Galleries of Scotland, at the opening of Tracy Emin’s major retrospective, an event which is informally marked by the podcast’s return to Edinburgh. “We spoke for about an hour and a half about different drawings that we were obsessed with,” remembers Diament. “Like me, he had been on a journey of self education and quite obsessive, kind of geeky interest in art. He had some similar references to me but also some very different ones.” Both collectors at this stage, they occupied an unusual position. “We weren’t the typical kind of wealthy philanthropist or supporter of art, basically,” he explains. “At that time neither of us were making loads of money or anything, we used to save up each month and put it towards buying artworks.”

It’s refreshing to hear about collecting from this perspective. It is an integral part of the art world but often seems from the outside to be the preserve of the super-rich. “One of the reasons I wanted to have a career in contemporary art, and why I’ve always been a fan of it, was because I liked the idea of supporting now and being able to help facilitate the creation of artwork in our time.” Diament’s motivations here connect with the motivations for the podcast in general. “For the artist, yes it’s important to have collectors to buy your work, or museums and galleries to represent you, but one of the most important things I think beyond all of that is actually having conversations and feeling like people are connecting with your work. I think we’re trying to encourage and engender that, really, to kind of start this conversation between people, and bring people together in that way. It’s really worked, in quite a short space of time.”

The interview subjects on the podcast range from artists – including Michael Craig-Martin, Tracy Emin, Phyllida Barlow – to gallerists (Sadie Coles offers a fascinating insight into the workings of artist representation) to fellow collectors taking their first steps into the art world. Says Diament, “We don’t just interview artists, we interview art world people, but one of the things we quickly realised is that to make it have a bigger audience we need to reach out to different kinds of creative people, or people who aren’t creative necessarily but are fans of creativity or art.”

For the Edinburgh episodes, supported by Bombay Sapphire, Talk Art take a tour of the city. They begin at Jupiter Artland to meet curator Claire Feeley, who offers some insight into the new Joana Vasconcelos swimming pool as well as a deeper level of understanding of the complexities of programming site specific artwork outdoors, piece by piece. Next they head to Edinburgh Sculpture Workshop to hear about the practice-based space and exhibitions from director Laura Simpson, programme coordinator Lesley Young and artist Adam Benmakhlouf, who you may recognise as Art Editor of this very magazine.

In part two, they head up to Collective during a thunderstorm to meet director Kate Gray, hear about the development of the space and their Satellites programme as well as experiencing the current sound installation by James Richards. In Parliament Hall they meet Edinburgh Art Festival director Sorcha Carey who discusses their commissions programme opening up hidden spaces within the city. Finally, they visit Talbot Rice Gallery to meet assistant curator Stuart Fallon and hear more about how the gallery within the university facilitates collaboration between artists and academic researchers to use emerging technology in surprising ways.

The podcasts offer a remarkable depth of insight, even for those already well versed in Edinburgh’s art scene. The pair enjoyed their time exploring the city, even though the torrential rain grounded their flight and they had to get a taxi back to London. Says Diament, “The thing about Scotland is that the art curators and artists that I’ve met there are all so down to earth, so open and so friendly. That’s another thing I want people to realise. The art world can only exist if we have these conversations, and if people engage with those spaces and support them and visit them. Because that’s why, in a way, we’re all doing it – to connect with other people.” 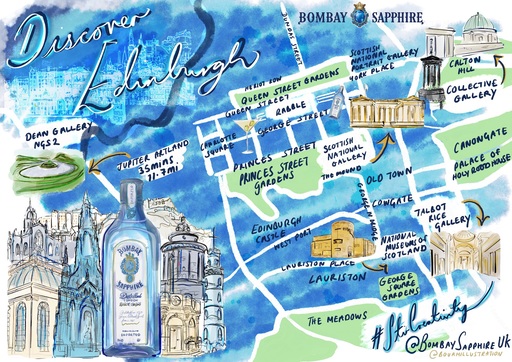