Rae-Yen Song on family, memory, and creating a whole world at DCA

Glasgow-based artist Rae-Yen Song's first solo exhibition is now on at Dundee Contemporary Arts. Here, the artist shares some insights into making this new body of work, which is rich with symbolism and well-crafted surprising details

Rae-Yen Song’s (R-YS) work is a whole universe, so it’s only appropriate that it’s constantly expanding across a prolific output of public performance, installation, costume, video, family collaboration and drawing. What emerges is a multimedia practice that seems to have no bounds. For instance, in 2018 when R-YS appeared in The Skinny to speak about being in that year's Edinburgh Art Festival, the exhibition included a gold-framed A0 lenticular image (the kind of ridged photograph that when tilted, gives the impression of a moving image) of R-YS’s family wearing bespoke costumes, including large pink-skinned heads with wide eyes and round “ooh-ing” mouths, with two of them in a handmade costume of a roaring beast, all standing in rolling hills in a green spot in Edinburgh.

This was one point in a timeline that now spans many years of R-YS dedicatedly building an ambitious and idiosyncratic network of characters, settings and motifs, including stylised clouds, many-legged microbes, and a multi-headed figure with a huge open mouth on the torso where a belly would usually be. While the beasts are uncanny, and with impossible-seeming anatomies, there’s nevertheless a coherence to the world that is inviting and intriguing. Throughout different events and exhibitions, these inventions by R-YS come convincingly together in their suggestion of form and believable dimension, suggesting a space that seems to have its own atmospheric conditions. This is in no small part because all of its elements are made entirely by R-YS’s own hand.

There’s the strong sense of R-YS’s singular vision that unifies the many projects, exhibitions and events that R-YS has formed so far. Nevertheless, the settings and bodies within this world are subject to ongoing change. In DCA right now, you’ll find – for example – a huge-scale, long-bodied tent of a creature, tongue protruding. From a certain angle, its many legs read as ribs, or from another perspective it seems like the hull of a boat. It looks like it could be microscopic bacteria or a deep-sea creature and it appears in several elements of the installation. In this way, motifs recur within and across R-YS’s works and exhibitions. “The space [in DCA] has its own logic or language... You don’t have to understand it, but you see it, you see that there’s a meaning there, a relationship, a world and a different way of existing.”

R-YS also speculates about the physical ways an exhibition visitor might try to find their place within these works on a physical level. More specifically, there’s a shifting in perception across different impressions of “micro- and macro-scale, growing and shrinking. Things are shifting and permanence is uncertain; you are uncertain about the true scale of things, the scale of you within it all.”

Highly suggestive in their textures, bright colours and forms, R-YS’s works skilfully elude stable identities. “I find it very pleasurable making something that can be everything; nothing; what it wants/needs to be; it can be so big that it disappears or so small – it’s everywhere. In this way, I see myself in it all. I am a shoe. But also a microbeast, a boat to take you to a new life, a rock, an orifice, an eyeball, a pot, liquid, my grandfather, my mother, a smell for your belly, the trapped air you need to fart out.” 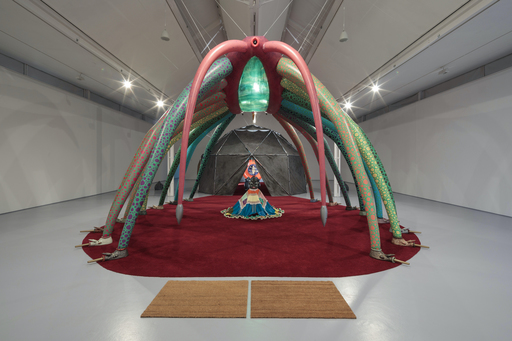 Entering into the large-scale installation means being gently submerged in the carefully interrelated details and structures set up by R-YS, which create layers of symbolism that are the rewards of slow looking. The multiple significances of each of the deftly-made elements proliferate, making for surprises as new details seem to appear, and the work encourages, in a literal as well as a broader sense that “we can keep revealing layers, become something else ... – it is slippy and totally free."

The above mention by R-YS of family members (“my grandfather, my mother”) is not made lightly. R-YS’s practice makes extensive references to fragments of family stories and histories, which appear and are transformed in R-YS’s works. The oral style that often characterises the transmission of knowledge among families is suggested in the title of the show itself, which is ▷▥◉▻. “There are no Roman characters used to spell the title, it’s only read through the symbols. I like the idea of [▷▥◉▻] being uttered orally, and that being understood through mouth and tongue and passed between people.”

There are further layers of delicate significance in the title, ▷▥◉▻. “These four symbols… pictorially symbolise the body of the space, the architecture, but those symbols are pronounced as 'seoh', which is echoing my mother’s generation name in Hokkien dialect, and loosely translates as ‘precious’. All of this is an indication that this is precious space, this is family space, treasure that is uncovered but also still has a sense of mystery and ambiguity to it.” The title is another instance of the hints that glitter throughout the exhibition, allusions to its own internal logic and the structures and symbolisms that R-YS builds piece-by-piece. Studied closer, the title reveals itself as a succinct blueprint of the entire installation, abstracting the largest elements into a small typographic version, as if seen from above.

At the suggestion that R-YS is bringing materials and works alive, R-YS replies, “I think they’re most alive when I’m making them. Purely there’s that energy that you’re just infusing into it, there’s energies being expelled and created fundamentally, heat is being created in sanding, in fettling, in using your hands around a material. You’re warming it up, you’re warming up a body, you know? It’s coming alive and it’s growing within your hands and within your touch and I think those are the most exciting things… the materials are breathing. That’s what I want to hold onto.

"That last stage of installation [when the works are hung, built and placed in the gallery], I loved. I see the work in its wholeness in those last moments of install, when it’s all being put together. [In ▷▥◉▻] there were some aspects I hadn’t even seen because it was too large to have in the studio, so I was only seeing pictures of it through design. They were all being put together in the last few days, [which] were the most exciting, tiring and exhilarating moments for me. That’s when it’s truly roaring.”

During the conversation, R-YS brings out two working jotters, and has them open on the table. They are dense with carefully penned plans, and tight personal notes and quotations from research. After this mention of the title as meaning – on one level – “precious”, R-YS remembers one specific reference and starts to flick through the many full pages to find it. Around the time of reading Sapiens: A Brief History of Humankind by Yuval Noah Harari, R-YS took this note: “ancient artefacts from different cultures did not have a concept of art, not for its own sake. Most of the Ancient Egyptian images, for example, were accessories to religious observance and beliefs.” R-YS adds: “I think the word 'art' has that sense… [that] it has to be something, whereas these things existed because people believed in them, they had to exist because they were part of life. [In ▷▥◉▻] I wanted to make work like that, rather than just calling it an artwork. It’s me, my family, it’s a memory. It’s imbued with so many different things, and the obsession to detail is so important because the memories are so blurred, the history is so blurred and scattered and fragmented so to fixate on these details is another way of understanding, or [making] an acknowledgement.”

When R-YS mentions consciously fixating on the details of making, this draws attention to the labour-intensive studio practice that has for a long time been routine for R-YS – who mentions in passing how this way of wholly concentrated working for endless hours goes back at least to when R-YS was a teenager. Doing this every day, building these bronze or papier-maché sculptures, crafting the ceramics, making the textiles, for R-YS it’s a matter of “devotion”, a term that feels helpful “as it goes back to craft, to labour, to making, getting closer to these stories.”

One personal note that R-YS shares during the interview describes a part of what's at stake across the works: “Forming physical ways to acknowledge the bits that I don’t know. Maybe the material can tell me things one day.” In one sense, imagination is used to fill in the gaps. “Things have been lost through journey, through hardship, things unspoken or forgotten – imagination is a tool to fill in those spaces and create things… in order to answer things for myself within the work,” which involves “understanding and writing a story that is fading away, but also growing and morphing into a new being.” With neat complexity, R-YS sums this up poignantly as “Telling past-future stories for my family.”