A Circle Has No End: Howardena Pindell interview

Howardena Pindell's exhibition at Fruitmarket brings together her diverse body of work for her first major UK solo show. Here she gives an insight into her studio practice, and the last 60 years of making social change as an artist and activist

One evening in November, in the midst of preparing for some of the most prestigious art festivals in the world, and keeping pace with the incredible demand for her work, Howardena Pindell spares 40 minutes to answer 11 in-depth questions about her practice, career and life. At 78, she has for six decades been dedicatedly making work for which she has received international renown and attention, forging a new path for herself as an African American woman in white-dominated art contexts.

Throughout her career, she has made paintings about war, Apartheid, police violence, the AIDS crisis, slavery and the environment. Pindell’s diverse body of work stems from research (which she loves to do), daring experimentation and the pursuit of beauty. Her home city is New York and throughout the interview, there are the sounds of the city as accompaniment. "I apologise for the background noise," she says "I'm on the first floor so a lot of people swoop through here on Saturday night on their motorcycles and souped-up cars." It’s late in the day, and she addresses each of the questions with a spirit of generosity and intellectual elegance.

Pindell’s output can at times be textual, with references to history and politics writ large, while others shift the emphasis to material, form colour and texture. By way of a general introduction to the different registers on which her works operate, Pindell draws a distinction between issue-based artworks and others that reflect on and express concepts of beauty. “My work talks back and forth to itself. The issue-related work can be heavy and depressing. The textural and colourful work is a pleasure to the senses, in making it and seeing it. I have two studio spaces – in the home studio I do the textural work as well as the issue-related work. I love to do research. In the outside studio, I do the non-figurative works, the large works. I have assistants, also. At 78 or 79, I don’t have the strength of a 30-year-old… [I’ve] been revisiting in recent times the early spray dot works on a large scale. There’s plenty of room in the [outside] studio. I find the textural works very calming to produce.”

These are the stunning abstract paintings that are often what might come up first when researching Pindell’s work. These are also notable in the way that Pindell works with the cloth of the canvas, without attaching it to wooden stretchers. “I love working on unstretched canvas, I love the free floating material. It feels large and less cumbersome without stretchers. My first abstract pieces were all unstretched or in some cases they were later stretched."

These aren't only unusual works for what the paint was being applied to (the unstretched canvas), but also how Pindell would paint with specialist equipment. "I worked using an atomiser, which is hard to explain because it’s an art supply that I don’t think is sold now. You had a spray can and it had a little attachment that you could put on maybe an eight-ounce bottle of acrylic with a water tension breaker, then you would just slowly spray through the templates which I made by taking file folders and cutting them in strips, because way back in the 70s you couldn’t get a hole-puncher that would go all the way in if you had too large a strip. Then I would glue them together, and I’d put a skirt of plastic around them so they wouldn’t create an edge.”

Pindell’s concept-driven works are in contrast to her large scale abstract and textural works. Pindell brings up the work Columbus (2020) as an instance of one of the issue-related works. It’s mixed media on canvas, made up of text on a black background of traced hands that have been cut out and applied to the canvas with black acrylic paint. It relays the untaught histories of Columbus, whose status as a heroic explorer is only just beginning to be questioned in mainstream education.

[TW: The rest of this paragraph and the next refer to deeply disturbing racialised violence.] In this work, Pindell in no uncertain terms details the atrocities committed by Columbus, and under his command, including 'LYNCHING OF FIRST NATIONS/ PEOPLE, TAKING BODY/ PARTS AS TROPHIES'. Columbus 'TRAINED DOGS TO EAT HUMAN FLESH/ GRILLED INDIGENOUS PEOPLE ALIVE. DISMEMBERED INFANTS, FEEDING THEM TO THE DOGS'. The text in Columbus is all-caps, emblazoned, sometimes curving off and around the text around as if communicating the excesses of the violence it describes, that the format itself must curve and bend to the enormity of what is described.

Columbus relates also to two other works, the painting Four Little Girls and the film Rope/Fire/Water. In Four Little Girls, Pindell “memorialises the schoolgirls Addie Mae Collins, Carol Denise McNair, Cynthia Wesley, and Carole Rosamond Robertson who were murdered in Birmingham [Alabama, USA] in September 1963 by the domestic terrorist bombing of the 16th Street Baptist Church.” It was a gathering place for the Children’s Crusade of 1963, whose demonstrators sought to integrate schools in the USA. Pindell carefully brings this history into recent times, listing the burning of Black Churches up until 2015. Similarly, she is careful not to historicise the past in the film Rope/Fire/Water, which recounts horrific lynchings of Black people in the USA, and draws a line from these to the present-day police brutality and murder. 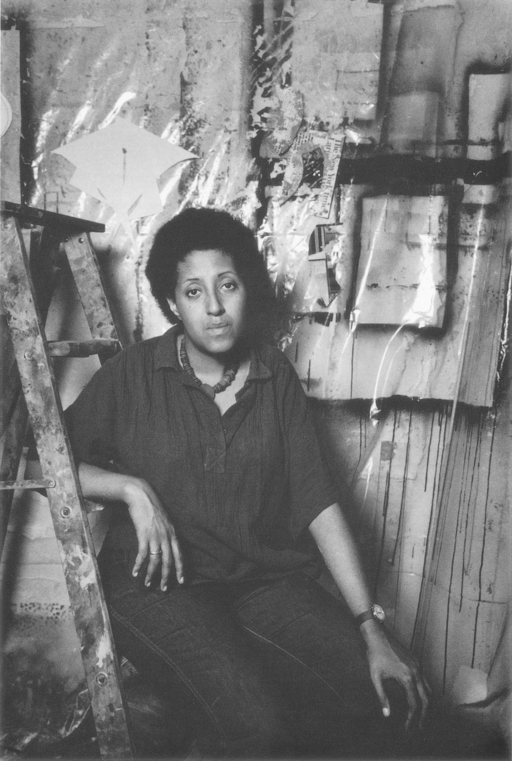 Speaking with Pindell, a more grounded sense of regress and progress emerges. She candidly recalls being ejected by racist restaurant staff on her lunch breaks while she was the curator of MoMA. Around the same time, she visited the Hamptons, where the likes of Jackson Pollock had taken up residence. Here, a gallery owner let visitors eat in front of the building, but wouldn’t let Pindell, because she is Black – she steadfastly did so, nevertheless. “The Hamptons are so racist, it’s outrageous… It attracted white artists, who didn’t notice.”

Years later, and relatively recently Pindell returned to the Hamptons to sit on a panel of three artists, with one other African and American and a fairly famous white male artist. Tired from standing and using her cane, Pindell went to find a chair from the foyer where a white middle-aged woman on staff – who was smiling at the white clientele on arrival, without asking them for their membership – demanded to know if Pindell was a member, then loudly asked Pindell to leave. A senior member of staff happened to be nearby, and intervened. “The woman tried to get me to sit in her chair and I refused.” Elsewhere, in the interview, Pindell says, “I would like to forget all these microaggressions, but they still linger in my memory.”

Having started the interview speaking about the method for making the abstract paintings, made up of countless circles, Pindell returns to where she began, with one last memory. “I’m fascinated by the circle because of an experience I had as a child. My mother and father, we went to visit my mother’s mother, my grandma. My mother was hanging out with her sister and her mother. She’d moved to Southern Ohio, which is racist in its own way. But Kentucky’s really racist. My father and I went to a root beer stand. We were served chilled mugs like everyone else, but at the bottom there was a big red circle. And that night, I asked my father what that meant, and he said under segregation, the eating utensils must be marked that Black people use. You cannot share eating utensils with whites… I think I’ll end here with that story.”

Just before sharing that last memory, Pindell hints at what she's working on now, and what's next. Describing how her work moves, she says it "accelerates, then break, then back-up, let's relook at it. Right now I'm working on large spray paintings. I don't have an issue-related painting in the hopper yet, but I have the literature I need to read. At home I'm working on a textural painting that is basically about beauty. I'm very interested in the colour of water, and of the Caribbean versus the Hudson which is brown, the colour of the ocean."

She traces this new work to her own time at sea, when she took a boat back from a trip to Europe as a student. She'd been coming back from the trip when she'd been made to sleep on a bed in the dining room of a Swedish hotel by the racist staff there, but also saw Paris for the first time. "I thought Paris was the most beautiful city I'd ever seen." She fell seasick and was given an injection to feel better. A storm broke out, and for three days, the boat went around, side-to-side, in every direction. For Pindell, it was close to one of the most traumatic experiences of her life.

Speaking of the motivations for this work, she also mentions "the middle passage, people were thrown overboard, people who were enslaved. This would be for insurance. For the worst of it, see the film [Fire/Water/Rope in the exhibition]." Nevertheless, Pindell doesn't finish there. As well as the ocean being the site of the terrifying history of enslavement, for Pindell there is the possibility to find wonder there, too. "It's horrible," she says of the murders, "but I'm fascinated by the colour blue and the colour of water. I especially like glaciers, when they calve, that is when they fall apart. There is this extraordinary beautiful luminous blue that's there. Plankton can be luminous in the ocean at night, it lights up. I love that colour blue."