The Royal Scottish Academy's New Contemporaries exhibition is a highlight each year in the art calendar, and lets audiences check in with a selection of the previous year's graduates just under a year after their degree shows

Each year, the RSA gives an unparallelled level of opportunity to new art graduates in Scotland to exhibit in their grand galleries in the city centre of Edinburgh. We've caught up with some of the 2018 graduates who have been selected for this year's New Contemporaries.

"I will be exhibiting my degree show interactive plant installation Protesting Plants and film Blessed Be The Fruit. My practice explores organic materials entangled with technology. Combined together, interactive installations are produced. My work seeks to give expression and vitality to nonhuman entities. When the spectator touches the leaves of a plant, sound is triggered and it appears to scream.

"I aim to engage the audience in reconsidering the way we view our actions in the world today. Our treatment of nature is immediately brought to the fore. I question man's negligence over nature and careless destruction of the environment. Combining the use of technology and organic forms such as plants leads to humorous yet jarring installations." 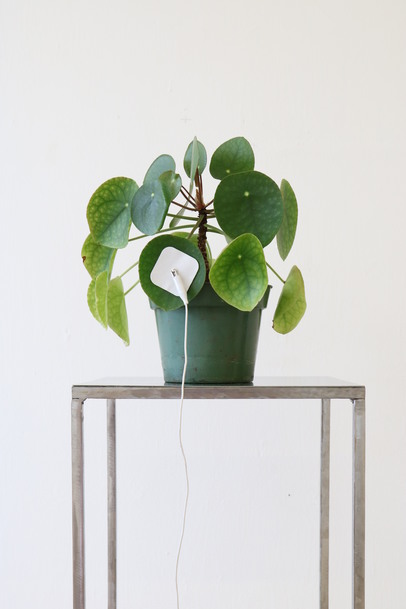 "My RSA contribution P Maxxx is a playful exploration of pleasure and its relation to politics and power. The work consists of a large-scale audio-visual installation built mostly from found/recycled/donated materials – timber, plastic but also the leftovers of my friends’ consumerist pleasures – cardboard and plastic bags with branded logos and packaging after various products.

"I am primarily interested in consumerism and pleasure and their relation to politics and power. Specifically, the outbreak of far right and fascist trends which in my opinion is a direct consequence of our obsession with pleasing ourselves. I see something very sexual in this topic." 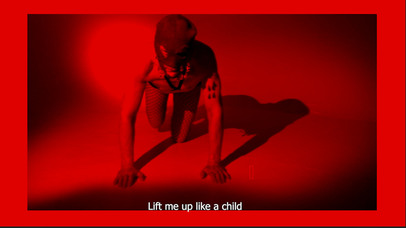 "I will be presenting a group of three large scale sculptural works alongside a hand knitted tapestry. The works build on themes of escape, pop culture and identity, themes that I began to explore in my 2018 degree show contribution – it’s hard to be a diamond in a rhinestone world. My work for the RSA remains quite ‘craft’ based, using techniques such as knitting and papier-mache, aiming to challenge distinctions of high and low, both in my choice of subject matter and medium. Acting as oversized props, the work aims to encourage the audience to draw together a narrative between each of the individual works." 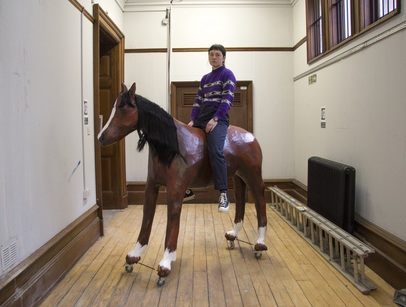 "For the RSA New Contemporaries, I am contributing two works. The first of these is Avodah 2018, reinstalled alongside my most recent work to date – Plough. I have chosen to show the works alongside each other to display their commonalities, both works placing value upon physically laborious processes found within historic systems of agriculture and craft. Harnessing and re-purposing these techniques within each sculpture, the results are dominant, unrelenting repeated forms. Looking to makers such as the Sabbathday Lake Shakers has led me to consider making as an act of worship and how this might translate through my meticulous and demanding processes." 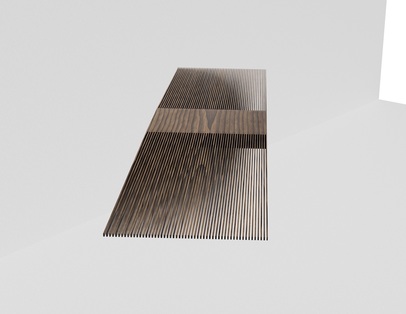 "The sculptural installation KB17 presented for the RSA New Contemporaries explores the unruly power of public structures and monumentalisation during the Russian Revolution at the turn of the 20th century. Lenin’s Plan for Monumental Propaganda detailed an almost obsessive need to saturate Soviet territory with statues of important public figures affiliated with the Bolshevik regime. However, due to a weak economy, the majority of these statues were constructed using non-durable materials – ironically contradicting the immediate objective of the monument – longevity. The ruinous and ephemeral state of KB17 questions the political intentions of these structures, and balances on a tension between the display of a new monument and an anti-monument." 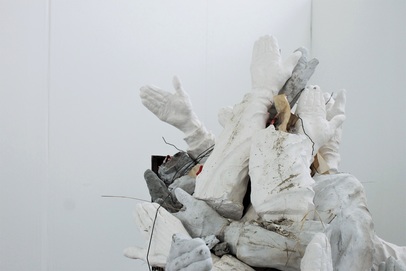 "The works on show, Precautionary Measures, Without the Means, Every(one) is known and Indent, are all works that speak closely in relation to the modern relationship between the state citizen and the individual. Although the work is predominantly focused around the photographic medium, there is still a number of disciplines used across all areas of my work, including sculpture, installation and mark making. The majority of the works have grown from an interest in the contemporary uses of CCTV imagery, biometric data and governmental processes of data capture, from passport imagery to fingerprint recognition. I feel the works really refocus the viewer’s perception of what the notion of the 'individual' is in the 21st century, especially when more advanced and arguably increasingly intrusive means of data capture are being rolled out globally." 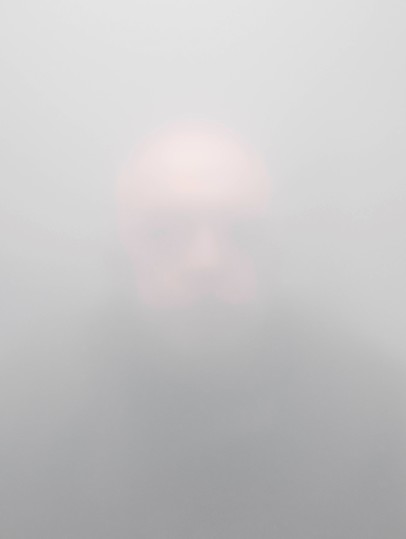 "My wider practice is almost always influenced by walking, and I’m interested in the politics of space, and the idea of sacred land. The work is, to my mind, not only a search for answers to land rights, environmental issues, and symbolic/historic dates, but also an authentic attempt to represent landscape as topic in relation to Glasgow's regional culture." 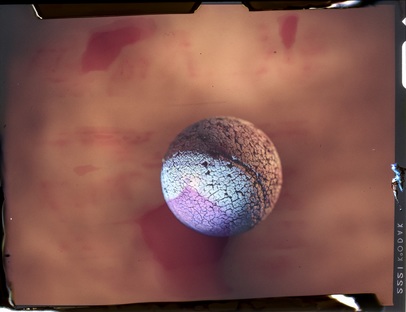 "I’m an observer. Swinging between digital and analogue photography, still and moving image, I explore the potential ground that exists in between fine art and documentary photography. Drawing inspiration from the great interest in the modern, dynamic art scene but also from my personal experiences, I believe in great power of the image in conveying emotions, truths and challenges of the modern reality. Having spent the majority of my life away from my motherland, I often come back to the theme of homesickness and belonging in my artwork. To present ordinary, never staged, not idealised reality is the picture making I practise. It’s an interest in things as they are. By using only one lens, the most similar to human’s eye vision, I’m capturing the moments and non-moments that drag my attention." 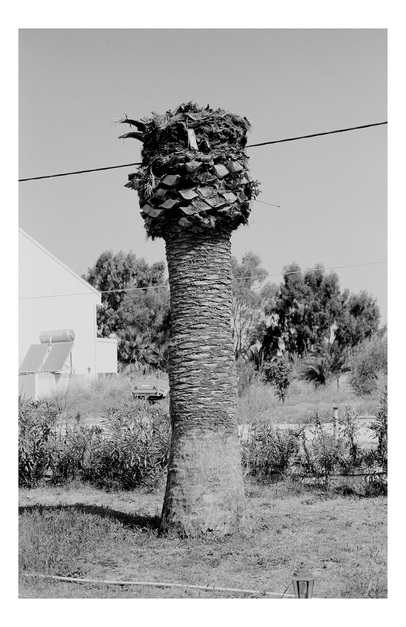 "I’m from Kilmarnock and a working-class background – I was the only person I knew that went to art school. A lot of my work stems from that alienation from the art world. In particular, I want to change performance art, to bridge the art between stage and gallery performance as a lot of people are alienated by performance work.

"My work for this exhibition will be four large A3 prints of screenshots of conversations to exes of any description (one night stands, people I saw for a couple of weeks). There’s also a performance. It’s me telling the stories of all the Tinder dates I’ve been on.

"I’m always looking at social media. There’s no other generation like us, we’ve seen the rise of the internet. I’m also speaking openly about women’s sexuality and sex life." 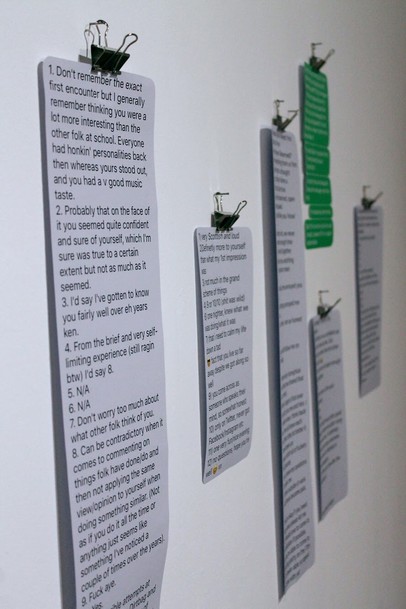